Since the day I started studying Biology I wanted to  visit the Galapagos Islands for all the work that Charles Darwin did there and all the biological wonders that live there. So this is my map of the islands and a little sketch of Charles Darwin.

I found an empty bottle of pills and I liked the color and the shape so since I was having trouble deciding what to sketch, I thought it would make a good subject. I tried to get a very blurry overall shape and then draw some of the pills to make a kind of an abstract background. This is what I got.

This is my bicycle. I have had it for around 20 years and it stil works very well. Sometimes I'd like to buy a new one, but I'm really attached to it.

Emmanuelle Tchoukriel is a french illustrator that has different books about marine animals, terrestrial animals, fish, trees , insects and flowers. I like her style because eventhough it's close to a scientific illustration it's more loose and "friendly". So I decided to draw this snail shell that I had in a box.

Day 17: A Scene from a Film/ Video you've Watched

I love "Fantastic Mr. Fox" movie from Wes Anderson. I like the story, the colors, the characters. There's this scene where Mr. Fox meets a wolf and they have kind of a conversation (Mr. Fox is the only one talking) and at the end they salute each other raising their fists. It's great. You can see the scene in this link.

One of my least favorite things is the guava fruit. I don't like that it has a lot of seeds and in general I don't like its taste. Strangely I can eat it in a smoothy, jelly or candy.

I was thinking about what to draw, I tried to remember what would inspire me as a kid. Then I realized that making art like a child was no having rules and fear of messing things up. So I started painting trying to use all my watercolors so I did and I came up with this mess. Very happy with it :)

I sketched this Monarch butterfly coccon because I can see it in the gardens of the city and it's a sign that the time has passed. First,  It had to be an egg, then a caterpillar ( very beautiful by the way), now it is a cocoon and in a few day it'll be a butterfly.

There's a railway near my house and a few times a day I can hear the train going through. It doesn't bother me at all, actually I think of it as a part of the acoustic ambient of my city.

I found this pattern in one bandana I have. It's quite old but I still use it from time to time.

One day I drew this jeep and I really liked it so I decided to make a T-shirt with it. It is two years old and is one of my favorite T-shirts.

I went birdwatching on Satuurday to a near park and I had the good fortune of watching a Northern Jacana ( Jacana spinosa) walking around, so I decided it would be a good subject to sketch.

This is the Natural History Museum in Morelia, Mexico. It's very small but it has a beautiful bird collection and nice botanical garden.

I sketched my niece's son. He's a really nice baby. He looks older in the drawing but his less than a year old. He always makes me smile.

Day 7: Elements of your work day

I love this phrase, it always helps me to keep drawing eventhough the drawings are not great.

I saw this lady making tortillas in a "comal" while I was walking in the street and inmediately caught my attention.

I watched under the bed and I found this pink thread reel that I didn't even know it was lost. I found it a good subject to sketch.

I sketched a piece of mexican typical bread called "pan de muerto" that would translate in bread of the dead. This kind of bread is baked only in the days around "Día de Muertos" (November 1st and 2nd). This typical bread represents a skull and four bones.

This is a little carnivorous plant called sundew (scientific name Drosera). I find it really interesting in the way it captures insects. Also it's a plant that I haven't given too much care but it's still trying to survive.

A little late, but this is me few minutes after waking up. 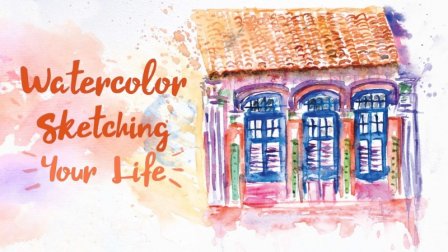