This class was so fun for me. I discovered and learned so much about watercolors and about myself. I have been challenging myself beyond the basics and creating texture swatches on my sketchbook with color palettes that suit my muse. I found it a bit frustrating to face each square and to have to think of more textures. Here are the first few pages I made. I have tons more but I am too lazy to upload, crop and edit them all.

The idea of finding textures has become a new tool for exploring the visual language of the world around me. I am kind of obsessed! My last project was a failure actually. The original version was the top one. I edited it a bit in photoshop because was afraid to go over the original with some blue. I didn't know how the blue would react with what I had already laid in the watercolor paper.

I was wishing I had used a turquoise from the get go. But oh well! you practice and you learn.

I also had a hard time working with acrylic in for my textures. I wanted to create some bubble textures on the water and it was very difficult. I think I may try with a gel pen instead because the bubbles outline needed to be thin and they weren't really showing well on my sandy colored water background.

Overall this was an awesome class.

Ok so after looking at the possibility of adding blue to my piece through the editing process I finally decided to make it happen for real. Here is what the piece looks like after adding blue with watercolor.

I was really saddened by the dark blue line that outlines the starfish. But oh well! I then did a second attempt at the bubbles with white india ink. Here is my final piece.

I really did not like working with either acrylic ink nor white india ink. I was frustrated about the fact that the outline of the bubbles was coming out so thick. I wanted them to be thinner. I tired using a calligraphy pen, super thin brushes and even a thin and long stainless steel needle I have. But I still did not get the effect I wanted. I will have to keep playing around and testing different white inks until I find the one I am happy with. 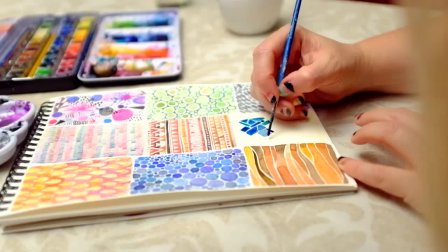