Exercise 1)
I was already familiar with these techniques but I don't practice them as much as I should! I think it's always nice to listen to different people explain the same thing because it will always be a bit different and you can learn something new ^^

For exercise no.2 I thought about using the lineart kindly provided (I think it's a great idea!) but I wanted to use this opportunity to practice sketching hands, something I know it's challenging but that I enjoy doing!

That being said, I searched for a reference that would have similar elements (one hand and leaves) and went on Pinterest to find one [see below]

The idea
I wanted to do a light painting, following the tones of the reference picture and keeping the strong light/shadow frontier but softening it up a bit. I idealized that the leaves would be more free, without a lineart, using mainly the watercolor to give them volume and shape.

Beginning
I think the base sketch was good and I was able to put down the colors in the right places, leaving the light white for as long as I could. I was enjoying the lightness of the leaves but I had a bit of a hard time layering the ones that overlap.

End
- SKIN
The skin tone ended up becoming muddy and I don't really think I was able to match the colors to the original photo. I still think I managed to define the light and dark areas but in some places the paper didn't seem to take the several layers and water mistakes, so it almost like bruises in
her arm XD

- LEAVES
They were hard to define in a more free way like I wanted so I had to do a small lineart with colored pencils in the end.

- NAILS
I'm doing a separate "topic" for this because I had a hard time doing the nails. I think they look pretty weird and kinda dirty ahah XD

Background
I wasn't sure what to do as a background but since I got the paper a bit dirty I though I'd use a POSCA pen to cover it up and bring a bit more light and a bright feel to this painting. I wasn't expecting the pen to actually end there's some gaps. Maybe it wasn't the best choice for such a broad area. Should have gone for a flat wash!

You can see the progress below!

CONCLUSION
At the end of the day, I have to be honest, I don't love the final result. However, I feel that I've learnt a lot with this exercise and even though I don't think It ended up looking like I wanted, I'm ok with it because it's part of my progress and sometimes artworks just work out another way ^^ 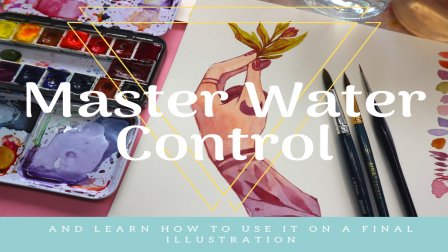