WIP: Trying to make markers work for me again

Confession: I used to be a total manga-kiddy who loved drawing manga-ish characters (badly) and colouring them with copics (badly). I got away from this, because the only paper that worked for me was marker paper - and I really didn't ... don't like the thickness. So this class with it's exercises and tests is a great way to discover a way to make markers work with my current style of painting.

(I haven't yet finished all the exercises and paintings, but since there's a giveaway I'm starting my project file today. :P)

Apart from the classic (thin) marker paper I have bought a Stylefile marker pad and thought I'd try out how it'd do. :) I prefer doing exercises in a sketchbook so that I have a better overview later.

I have never actually tried consciously layering in this way and usually just go in at full saturation from the start. So I was really looking forward to this exercise!

This didn't go too well and one of my markers died halfway through the exercise. The colours were also extremely dull (you can see that better in a picture below).

I was extremely disappointed and discouraged. After having a cup of tea I decided that I would check if it was me or actually the paper. So I got out my trusty ol' marker paper.

Yep. Definitely wasn't me. And no, it's not the size of the paintings, either. That sketchbook paper just felt crappilicious when laying down paint. o_ô

So I pressed on with the next exercise anyway, because the book has like 40 pages and I might as well use them.

*meh* I didn't even continue. I'm pretty sure there's a way to make gorgeous paintings with this paper, but atm it just isn't working for me. I'm up for suggestions.

Then tried the exercise on marker paper:

It was so much easier to get that fade to white effect.

Trying that exercise on the sketchbook paper had exhausted me, so I didn't try to maker this bottle look super nice. But I'm really happy with the exercise and this technique! Really great if I ever need translucency in my paintings. :)

I mean, what ze Ef is that Stylefile paper doing? Has anybody used this paper and gotten it to work?

I was so fed up with the sketchbook paper, I went and started painting some illustrations instead of continuing. (I do have that rose drawn out and I'll colour it. Eventually. Probably. ... Also, since I'm obviously on a PC today I'll be finally able to print out the gorgeous bouquet provided and then colour it in! :) Will upload when I'm done.)

I had this design for a new year's illustration planned out. (We live in Europe now, so we can't really get new year's decorations. So I just draw them. ^^; )

Next year is the year of the cow and so I arranged my moos in a kagami mochi style. ^__^;

I tried a new tactic with this one and used a Winsor & Newton drawing paper for this one. The blending and all isn't as smooth as on the marker paper, but still OK. The paper bleed a tiny bit when saturated, but since I was going to outline this one, anyway, I didn't care to much.

I wasn't going to do a background, because I knew that was going to be a pain on this paper. But I felt the picture really needed it.

My blue marker died and I had to go in with a second marker. Also, this looked horrible. So I got creative:

I'll be honest and confess that I've watched the next class in this series, already. :3 I was dotting along with my colourless blender and when I got fed up, I got out the actualy alcohol and apllied it with a brush. ^^;;;

And then I got out a brush pen and my trusty copic white (which I use for everything, all the time):

(I think I'll scan this when I'm done completely, because photographs just aren't that nice.)

I feel a bit like a cheat and like I should be able to make this work with just markers. But honestly, it's also the paper that just gives a streaky finish and bleeds. So I had to go multi-media on this.

I'm still not done! There is going to be gold and stuff on the fan and around the little cows neck (which is going to be an elaborate bow). Gold often won't work for me. I've thought about buying some acrylic gold inks. Has anybody any experience with these or any other suggestions?

Also, I started a second illustration, on the same paper, which I want to have a slightly different style. I'm not 100% happy with the paper, but I'm determined to make it work for me.

Next I want to go in with coloured pencils to see, because I want to have that grainy look. Wish me luck. :)

That was all for today. See you when I've got more to upload! :) 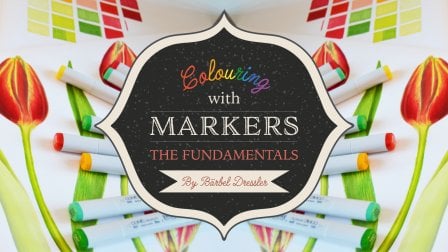