Change inspires me. It is a reminder that reinvention is possible. I wanted to reflect on change's spontaneity by alternating lower and upper case lettering.

My too-much gene kicked in with color choices. Every time I'd use color, I'd feel like it was already too much. I thought of a sunset in the background, but with fewer colors. It connected the letters to a larger example of change: time in nature. I used some sneaky clock-imagery on the I's of the letters.

To ground the letters, I incorporated some vines. Finally: I added butterflies as they are key symbols of change.

What I Hate (Most)

For the next exercise, I created an image with a Harry Potter concept in mind. Boggarts are embodiments of fear. I like poking fun at annoying things, much like Harry and his classmates learn.

So, I comically dismantle the power of irritants. I implemented bright colors, and comic-inspired text, and engaging panels within a contained space.

At the core of this assignment, I poke fun at my fear of being isolated and separate from the world. This is why I put all my images within a semi-circle, to remind myself that, in the end, everything is part of a bigger picture.

The things I dislike most are connected by a loss of control. The ones I feature here are: the smudging and slipping off of my glasses, the disorienting blare of an alarm and the terrifying uncertainty of missing an appointment, my anxiety of getting caught heating a late-night snack via the loud bing of our microwave, and finally: my pencils breaking midway through a sharpening session using my fancy-pants pencil sharpener.

The more I tried to get to the root of my dreams, my wants, the things that I want most, the more I realize that it's unrealistic. For this exercise, I incorporated quotes from J.M. Barrie's "Peter Pan." I wanted to communicate two competing notions: the importance of (childlike) wonder, and also a (grownup) understanding of complexity. Some creatures I used were mythological and then others were based on some real-life ones (particularly the one in the bottom left corner, which stemmed from sea dragons). My too-much gene kicked in with this exercise. I used an excessive amount of colors.

What I Fear exercise: "Time"

For the class's fourth exercise, I created a tribute to time and its complicated nature. I drew a semi-solid hourglass to signify limitations of time. Thinking of deadlines, alarms, time-limits, I rooted the hourglass with antique-inspired wooden foundations. Within the hourglass, I explored time's capacity for seeming endless. To communicate this, I incorporated cats, as they embody the concept of revival (nine lives). But, I also wove in galactic imagery and color-schemes. Water was another element I brought in to create symmetry within my project.

Atop the cat imagery, I applied a spiraling clock. I thought of Alice in Wonderland and microwaves (stay with me a second). Time isn't the same across the board. It sometimes depends on the context. A minute feels overwhelming when your favorite dish is cooking in the microwave (and the agony multiples when you're hungry). If you are taking a test, time is way too fast. This is why I drew tiny fish within the water on top of the hourglass. We are tiny in the grand scope of time. And, maybe we're not so tiny (again: context. Maybe some other fish will think we totally rock).

My Project for the Freestyle Prompt

For this class' final project, I explored my discomfort with art. Prior to this class, I had limited interaction with art. In the project, I present two warring art attitudes. So: on the bottom half, I feature nature symbols to embody the notion of art being instinctual. The hummingbird hints at the fleeting nature of inspiration coming randomly. It's beautiful, but hard to count on. The branches near have dual meanings.

I wanted to bring in a scientific element to this project. To do that, I incorporated a DNA double helix model. I wanted it to represent art being instinctual--and I also brought in the idea of art being genetic, which often plays into my self-talk around art. I have family members who are way better at art and I constantly feel like an impostor.

The top half of the project represents a more measured, premeditated, and planned approach to art. I have enjoyed researching, drafting, and filling my projects with little symbols. This is why I brought in the microscope to this project. Furthermore, the microscope symbolizes my own self-scrutiny and sabotage. Enter the stag, which symbolizes my nervousness with art, trying new things, and sharing my work. The stag represents nature and instinct as well. 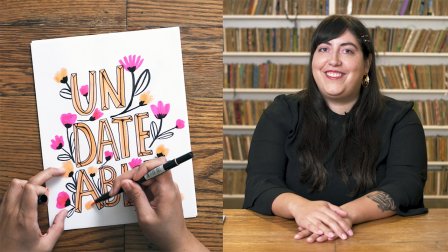