This was a great class. I appreciate you filming your entire process.

I had a big cup of coffee and then dove into this.

Inked outline. I was pretty caffeinated by this point, and I think I rushed through some important details. I never went back to ink in some shadows, so the final work felt a little bit flat. Decided the house would be purple, and then tried to complement with a couple other colors.

I have this horrible habit with watercolor of going back in to wet color to try to even things out, and sometimes it works out, but I used these Hydrus liquid watercolors and they just don't forgive like that. I love their saturation, but you really have to be confident, and I panicked and sloshed a lot of color where I didn't want it. I just need to slow down. Maybe less coffee next time.

Definitely enjoyed this project. I'm planning my next sketch already. And I have a lot of really cute storefronts and facades in my town, so I might turn this into a larger project for myself.

Thanks for the great instruction! The sample photos were great. I thought I had picked a relatively simple one, but once I started getting into it, I realized it was actually much more detailed than I thought it was. And after I finished, I looked at the image again, and there was some really interesting stuff that I had missed completely.

UPDATE:
I gave it another go, with less coffee in my system. I used a picture of a house from one of the towns along the Cinque Terre in Italy (Riomaggiore). Tried a little perspective. I purposely avoided using a ruler because I like the imperfect lines. I also tend to get very obsessed with perfection, and once I break out a ruler, I can spend an hour trying to get all the lines perfect and the proportions right, so I just went with it.

I also used regular watercolors, which gave me a little wiggle room if I messed up, which I did. A bunch. :) The colors are much cleaner. I'm working on being comfortable with bolder shadows. I never seem to mix up a dark enough color from the start, and I end up having to go back and do the shadows again. I think I am just inexperienced at mixing colors, but this is definitely a fun way to get better at it. 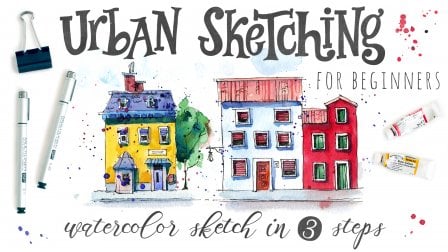