Tone in my Artwork

I snapped a few photos of some of the latest artwork I made. Then I desaturated them to see the tones. I was pretty baffled by the result!

The green is much darker than the blue in tone! And the yellow is actually darker than the Kraft paper background. The pink no longer pops once desaturated. The only reason it pops is that it's very saturated, I guess. This is really confusing! The dark teal and the green create more depth, as well as the black ink lines. Obviously working with Kraft paper I'm starting off with no light color, unless I add white on top. Much learned just by this one observation!

Then I took another photo of the same drawing using a different camera and a different angle to the light. Now the lights and darks look different. I'm a bit confused. I guess it's not absolute light and darks but depends on the lighting?

In the following drawing, I used white and a fluorescent red paint marker. I love how these two colors work together with the black ink and the Kraft paper:

After desaturation, the red is invisible! I guess similarly to the hot pink in the previous study, the reason this red popped for me was because it was so saturated, not because of a difference in tonal values, as opposed to the black and the white. Fascinating!

Here are some "feathers" I painted in watercolor. At the time, I was worried about the color palette I was using, though in the end I think it came out nice.

After desaturation, I can see that most of the feathers are similar in tone, though there are some slight variations. I'd like to try this again while deliberately creating a palette of dark, medium, and light "feathers" mixed together. That said, I think it's okay to go for a low contrast painting. The whites around the feathers add to the contrast, and so do the dark (though not black) lines on the feathers. 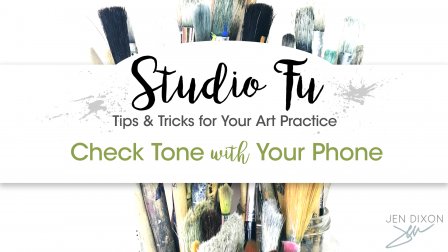