Three boards to start the year

So I did this on New Year's night to get some clarity for where I'm headed creatively for the year.

I had a few magazines and catalogues at home, but I've also used an app called Issuu that lets you read magazines for free, screenshot pages and printed them, about 70 total. I especially like Inside Artists, since it publishes lots of different artworks you can use in interesting ways. I also used my typewriter to add some text.

For the main board, the only words I had for the back were "Creative Power", since I'm going to focus mainly on creating this year. I had a rough idea where i wanted to go visually before I began.

It quickly got clear however that I had 3 distinct groups of images gathering.

The main board is glued to a flat canvas, with a coat of varnish overtop. I like that the surface texture of the canvas comes through the paper.

For the second board I wanted to preserve the crispness of the paper, so I used double-sided tape to affix the cutouts to the backing of a frame I had lying around. It sums up my 2020 that was focused on getting in touch with my inner voice. The words on the back are something I heard in an Alan Watts lecture: "I found out who I was. And it sure wasn't who I was told I was".

Making these two boards helped me see the distinction between my work and my personal life. I live in my studio, so it can be hard to separate the two, but this shows me there's a difference.

I keep the inner voice one in my bedroom, which is my personal space and a place of rest outside of work.

And finally the last one is for my poetry, which is what I'm mainly focusing on this year. I'm hoping to publish my first collection by the end of this year.

It's glued to a black foam board with wrapped edges and a coat of varnish on top.

Keep it in my writing corner) 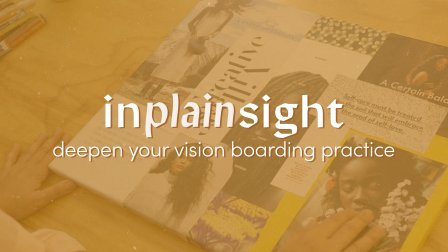