Thank you Ohn Mar for this cool classes on how to paint lighthouses. I like all 3 different approaches. The first one was pretty obvious for me, and I like the negative painting with the blue sky for the white part of the lighthouse. I think this one may be my favorite, I like its simplicity.

The second one was super cool, I never worked with wax resist before, and I don't have a candle, but I do have a white crayon! So I used that, and it worked perfectly. Then I messed up the colors of the little house, but I think I managed to fix it. I like this one too, even though it is a bit of a leaning tower, and I enjoyed painting the sky too.

The third lighthouse was tricky, as that tissue paper is quite thin, and I threatened to destroy it several times. But I liked painting the shadows on the right side. And I added a red roof to the little house, I thought it was better, until I put some blue next to it that was supposed to be the sea at storm, but it just looks weird. The tower looks stylized, pretty interesting.

Anyway, all in all I spent a few hours enjoying myself painting these! 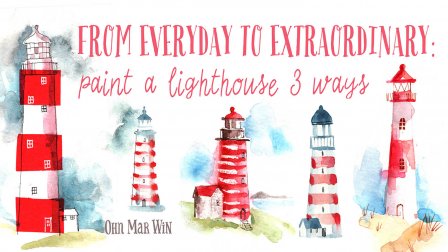 From Everyday to Extraordinary: Paint a Lighthouse 3 ways in Watercolor
Ohn Mar Win