This Little Light of Mine

First off let me begin by saying what a great project this was. I enjoyed the class and the process a ton. Thanks Erik!

I went with the song Fire In Me by John Newman. It was just one of those catchy numbers that had found its way on to repeat a fair amount so seemed right to start there.

First off, idea generation.
So the vibe I was getting was a bitter sweet kind of happiness. That feeling you feel when you have been heartbroken and spent the days being sad but finally come through the other end knowing that you can still make it on your own and now you may be stronger than ever before. It felt empowering and inspiring.

This was the first time I had heard of/used the "three pillar" deal-io that Erik mentioned which seems crazy since I'm all about the idea generation. Any way, it was great to learn a new trick and it helped with visualization and sorting the random ideas into an actual direction.

I did a couple of small (janky) thumbnails just to continue the progression of a few of the ideas. Even though my final design didn't really resemble these since we aimed at a bit more abstract, they served to help with pushing my ideas a bit further and nailing down the overall feel I was going for. The idea I did end up taking from this was that of a solo light.

Next I went and made myself a sweet viewfinder and got to taking photos. It only took me a few to find the one that I thought would do the job. Hello solo light.

Next the fun stuff. I used an application on my smartphone to do a little initial editing. This app allows you to "glitch" your images. After messing around a bit I settled on something I was happy with.

Once I had my image on it's way I took it over to Photoshop to sort levels, colors, adjustment layers etc.Feeling pretty good about where the image was heading it was time for type!

After a bit of consideration I settled on the type in the above images.

Then it was just doing some touch ups on the type, layout and some final touches on the image. Before you know it my first SkillShare project was completed.

I think I could have spent more time on layout for the type but this is something I often struggle with and can spend hours moving type and such around. If anyone has any tips or advice for the typesetting in this (or any other part of the project) I would love to hear from you!

The black boarder is just so the white boarder can be seen here. Thanks for taking the time to check out my project .

Every day's a school day 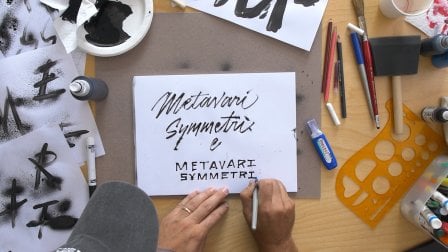