Client: ThinkUp is not a local shop, but you could say, a local app, created by a friend of a friend. The app allows users to record their own affirmations in order to improve quality of life. Currently, the logotype is simply set in a sans serif font, and it could be much more meaningful and memorable, reflecting the personal, positive, inspiring nature of the app. I also plan to rework the app icon, along with the logotype. Below is the app's current logo and icon:

Research: I looked at the logos in the field of wellness/meditation/affirmations apps, and noticed that a lot of them favor either a freestyle script or a clean, soft, rounded san serif. I think the two styles are appropriate, since one alludes to something personal, and the other suggests balance, reliability, assurance. Below are some of the logos I found for the similar apps, and also a couple of logos, which feature a mix of a clean sans serif with a lively script, an idea I think fits here, and could be incorporated:

Personal/Handwritten: a script logotype, suggesting handwritten, personal, unique, handmade nature. The app is a highly personal and personalized tool, so this style is appropriate.

Balanced/Solid:  The use of the app brings about a balance in life, it helps create assurances, bring about focus, determination and clarity.

Before starting on sketches, I wanted to try out some calligraphy to see if this direction will work. I do not have much experience with calligraphy, so I took a couple of Skillshare lessons:

Next, after settling on several script styles, I moved on to sketches. I came up with a couple of script styles, a san serif logotype, and a mixture of calligraphic script and serif or san serif letters, in order to explore several options.

In the sans serif concept, I like how the "n" and the "u" create opposites, suggest balance, and may be even remind of a frown and a smile:

Next step - vectorizing/digitizing. This is the first round, so obviously far from perfect. I will choose several to pair with the icon and show the client. Once the direction is settled on, I plan to go ahead with fine tuning the chosen concept: 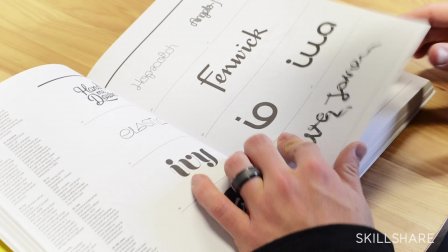