It’s Monday morning 08:00, when my alarm went off. The sound of birds filled up the bedroom of my boyfriend’s apartment in the city, but he refused to get up. He’s the King of snoozing, but I am the Queen of productivity. In my head I went over all the things that are on my mental to-do-list while I saw the clock go to 08:01, then 08:14, and then 08:28. My boyfriend was still snoring on the other side of the bed while was scrolling through my Instagram feed. Which is filled with women from all over the world who have one thing in common: even in quarantine; they are busy as hell. When my boyfriend pulled the black sheets over his head to muffle my voice that would wake him, I got annoyed. “We have such a busy day,” I said. “We need to get going, because we have so much to do.” “Come on honey, wake up! It’s almost nine o’clock and we aren’t even dressed yet!” In the meantime, my heart was pounding in my chest, my legs were restless and I kept fixating on that list of mine that I hadn’t even started yet! I needed to do the laundry, made a grocery list, do the groceries, finished my work project, I needed to clean my entire studio, I really needed to work-out too. Man, I was not going to finish all of that yesterday! “No,” I heard from under the sheets. “I need to do an awful lot of things, you on the other hand do not.” He was right. He is always right. I had an awful headache and needed to take it easy, and I don’t have a job right now because the restaurants are shut down. I had no obligations, none at all. But I didn’t realize that first and I started chatting and rattling about all the enormous things that need to be done then, while we were still in bed and wasting precious time that should have been spend elsewhere. “Renée,” he said firmly. “You are not allowed to be busy.” The list was still raging in my head and I just couldn’t seem to loosen up and let go of the productive day I should been having instead. “But I need to,” I started, but he didn’t let me finish. “You are still able to use the bathroom if you haven’t cleaned it today. Nobody is telling you that you need to do that right now.” “But I need to be productive today,” I argued while I took a seat on this lap. “But honey, you cannot be productive at all. You are sick and you don’t have to work today,” he said. I thought about what he just said while I still sat on him. I knew that that was true, but the urge to just do something was so big that I couldn’t put it out my head. “But how? I feel terrible if I do nothing all day. I am not made to be lazy,” I replied eventually. “You have no other choice than to try to see it from another perspective. You can only be lazy if you are neglecting the things that need to be done, and right now there aren’t any. You cannot be productive today,” he said. “Just try to keep that in mind.”

While I walked to my own studio further down in the city, I couldn’t help but wonder how I could not be productive? I figured that I can be unproductive in a lot of ways: I could watch a whole season of Grey’s Anatomy, or I could watch video’s about rescued kittens or puppies. But there is one thing that I couldn’t do. And that was to let go of the need to be productive. Whenever I tried to do something that wasn’t productive, necessary or useful in my eyes, I felt ashamed and guilty and there was a devil on my shoulder telling me that I wasted the day doing absolutely nothing.

I knew that I liked to be busy, and that I liked to have a finished to-do-list by the end of the day. What I didn’t knew however, is that I was so focused on being productive that I would have so much trouble with finding peace in doing something what I would like to call nothing. Even if nothing is more than literally doing nothing and starring at a wall. Somewhere along the way I made the connection between feeling happy and fulfilled with achieving goals and being productive. And I realized that when I don’t do the things that I labeled as important, necessary or productive like writing or working-out, or work, or even reading my emails, I see myself as this lazy, ugly and even terrible human being. I need to feel this satisfaction of crossing things of a to-do-list in order to feel good about myself. Sometimes I put tasks like making a list for the grocery shopping on my to-do-list just so I can cross it off seconds after I wrote it down. So, yesterday I was in conflict with my beliefs and reality and it makes me wonder: why do I need this sense of productivity to feel good? Is it because I am a workaholic or is it because society makes me feel that you always need to achieve and aim your goals higher each time? I have to say that I do get so much motivation from social influencers and powerwomen on Instagram who are teaching me to do more, and how to achieve my goals. But being constantly confronted with women who are exceeding in everything and who are working their butts off creating new and successful businesses, while you are in your sweatpants on the couch watching Grey’s Anatomy is not a key to personal success. I for an example, even made the connection between laziness and wearing a sweatpants, so I don’t even own one. So the thing is: while I love getting inspired to be my best self by seeing these other women being their best self, they are really pushing me to constantly be productive, even if I really can’t. And that’s a problem. Feeling like a total failure because some influencer is up at 5 A.M. to start on that project she always dreamt of doing, is not something I want to settle for. I want to be inspired and motivated to get out there, step out of my comfort zone and think about what my goals are for the future, but I don’t want my hopes and feelings to be crashed down on the Earth because I cannot work on them right now! Maybe we all need inspiration and an example for how life can be, and these influencers are great in doing that. But maybe, we also need a reminder that it’s okay to take it easy sometimes and that it can be useful to take a break and take care of yourself. I for sure need that reminder more often. My brain is programed in a way that’s hard to reprogram. I made the connections early on in my life and it’s hard to think differently about them. But I try. A lot. And it is not helpful to see these influencers doing the exact same thing as I am doing without falling apart. Without failing. I need someone to speak up and say: Yes I like to have my day packed, but I still overthink at night and I despise the sound of my alarm that tells me that there is another full day ahead of me. I need realism, and I am sure that you – the reader – needs that too.

You would think that in quarantine the social pressure to achieve things would be less because we are literally not allowed to. But, there is a new kind of social pressure upon us. Every influencer is pushing themselves, and therefore me, to get the best out of this lockdown. They are working out for hours, running whole marathons, baking so many banana breads, learning a new language, sewing their own masks and I can continue this list for a long time. Even now working and being successful is not the main focus anymore, influencers are now putting pressure on self-care. Something that is made to decrease the pressure instead of adding on to it and that’s crazy!

But luckily there are some magazines and influencers who realize that we are freaking out as much as everyone is, and that we all need a break from this pressure to constantly achieve in the eyes of others and the eyes of ourselves. Mental health bloggers are having a major success in calming us down and telling us that we need to be easy on ourselves. We have to be kind and loving to our mind and our bodies. Something that sounds so obvious, but is actually much harder than you think. So of course: work-out, bake banana bread, learn a new language. But only if you really want to. Not only to make you feel like you used your ‘free’ time wisely and you want to feel productive. My psychologist once said: “See taking care of your body and your mind as the highest priority. It is the most important task you will ever need to fulfill.” 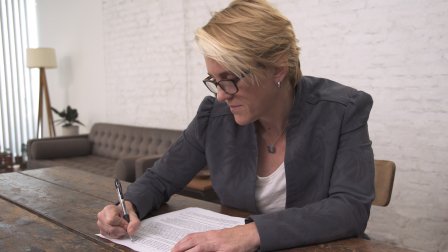