The sandwich of production - by noamtsvi

Hey everyone. I'm NoamTsvi. I see myself as a creative person. I love building and making things, solving problems, Inventing things, design, art, 3d printing, cad modeling and just messing arround with creative challenges to myself. I am an industrial designer, but the dream career isnt exactly what I expected. My dream is to be creative with my own projects and be able to make a living from it.

In this video I present to you my very first sandwich, metaphorically of course. It was harder than I thought it'll be, and took way longer then anticipated. editing was the messiest, every few minutes I yelled questions at google and youtube because I have no Idea what I'm doing. I learned a lot that way though. hearing myself speak was super weird, something funny happened to my accent and I forgot half my english, a bit of stage fright maybe.

I have no equipment whatsoever, even that cheap microphone I had didn't work, so the audio is the build in mic of my phone. Jazza showed a couple audio editing tips on his channel, like using a compressor effect while editing, very very helpful.

Because I only have one camera/phone. the scene with me cutting vegetables from several angles took a long time. I had to set up the camera three different times to film at three angles. and I cut a whole lot of veggies. while I was cutting the onion, my phone actually started to shake because it was resting on the table. I need to start saving money for more cameras..

I have about an hour and a half of raw footage, if I remember correctly. feels like I spent years on editing. it was such a mess that I literally cut words from a sentence and re arranged them. next time I'll try to stick to the script..

My dream is to work at what I love doing, and just be creative all day. I know youtube isn't a realistic option at the moment, but if I build it up, then maybe in the future it will be. I'll hope for the best.

About the content of my channel I think its best if I divide my channel into two. on one channel I'll share creative projects and Ideas, things that are fun to watch. This will be my larger audience. my other channel would be more educational, with tutorials on CAD programs like solidworks or fusion360 and also 3D-printing. I believe this would be a smaller audience. In other words - one channel that I can share with family and friends, and the other one is for people who are already part of CAD modeling and 3D printing. Maybe another option, is instead of a second channel, I can teach on skillshare.

I think my channel names will be "noamtsvi" and "noamtsvi-tech". people will know the name after watching videos, hopefully. like Joregsparve for example.

Another option is to make another channel for my country in another language, but I might not be able to keep up with to many channels.

Anyways those are my thoughts, I'll appreciate to know what you think.

thanks for watching my video, I hope you like it. I do believe my future videos will be better. anyways, I'll see you later.

this video is up for a couple of weeks now, with 276 views, I've added a snapshot of the audience retention graph from the youtube studio. looks like the retention goes up when I peel that onion. or maybe its just because lots of people just skip a minute ahead and they accidentally land on the onion. just found that interesting thats all. 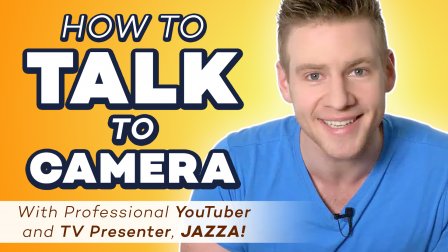 How to Talk and Present to Camera like a Pro!
Josiah (Jazza) Brooks