I choosed to test all the three kind of perspectives, so I started with three sketches as suggested.

Trying to challenge myself to learn as much as possible, I wanted to go out of my comfort zone with any of them.

I'm gonna show you here all these three drawing and I'd like to have some feedback for any of them on any aspect you think may be of help. Keep in mind these are just the basis to kick off with my project, so no much details yet, as I want to see which of them jump out at me the most, not just with the composition, but with a possible story behind any of them.

First, the one point perspective. I placed the VP a bit off the center zone. 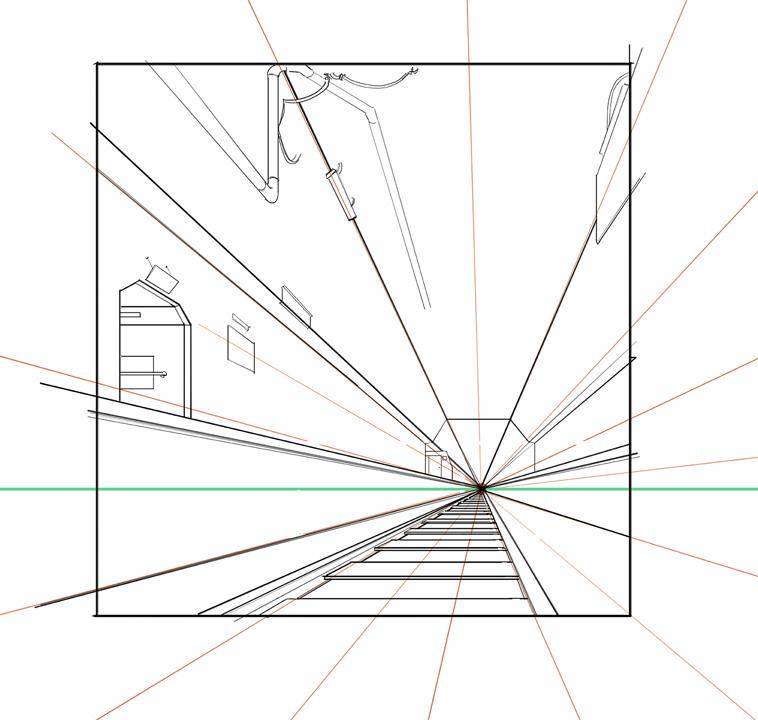 This is supposed to be an underground railway, the pov is placed to focus on the train coming (didn't draw it) and on some subjects on the foreground (maybe a cat playing with a mouse), keeping people coming on the left platform in a marginal role, just to support the main scene.

Then I went for the 2 PP. In this case I was affected by the vertical composition is possible to recreate through it. 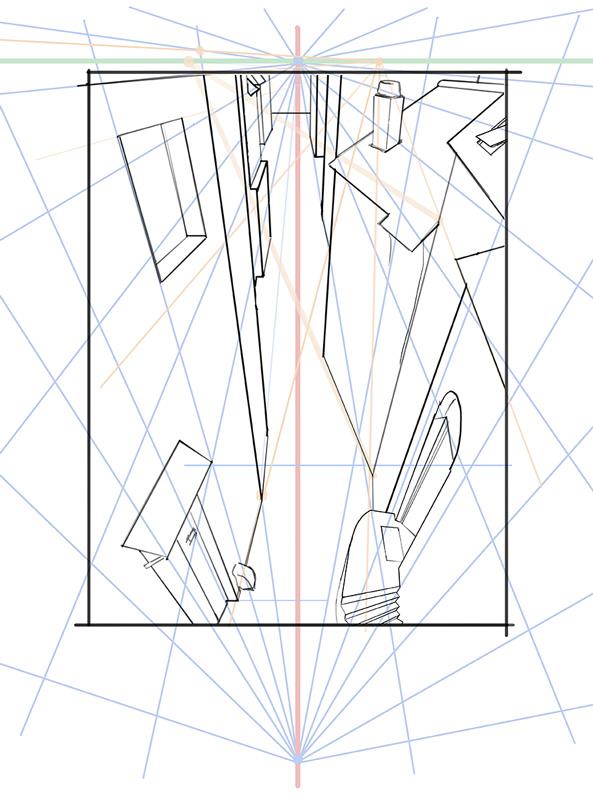 It is about an old town centre alley. The main difficulty was to understand how to place some of those houses not in line with the horizon, especially when it came to draw the 3rd dimension (just a few cases actually).

At last, the 3PP, where I wanted to try to guess the set of orthogonals for the 3rd VP. 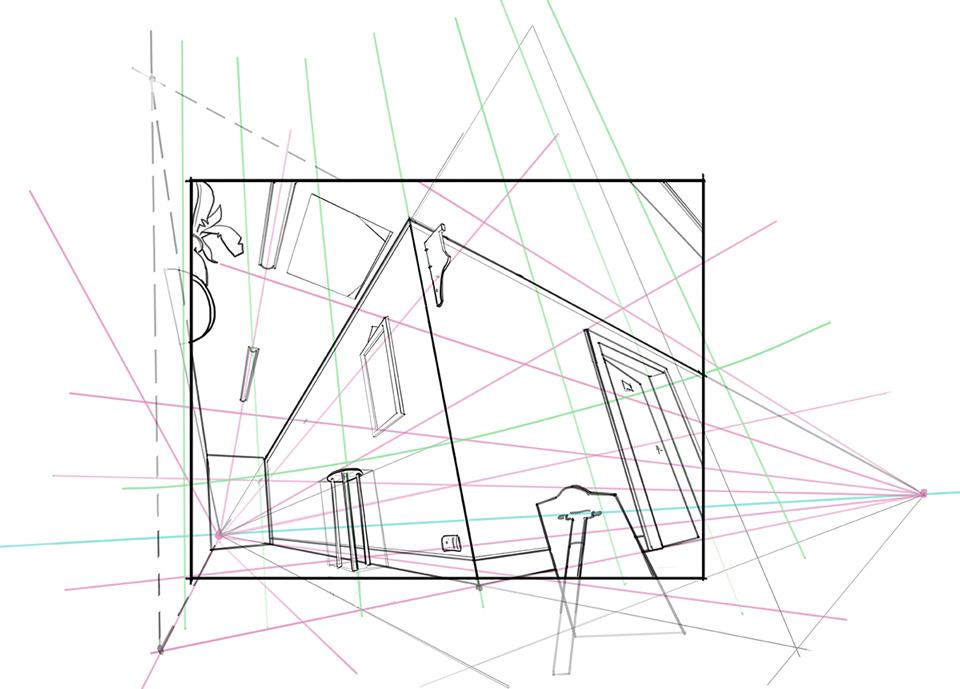 For this I didn't have any idea at first, so I just set the horizon line and the orthogonals and saw what could have happened. It ended up with a hotel corridor (in my mind). Before adding some details around, I tilted slightly the horizon line aiming to give a more dynamic/dramatic feel to the scene. I have a story for this too, like the previous others.

Now I need to make up my mind with which one to proceed, only then I'll start working on details, shadows and general mood (plus some characters too). Until then I would be grateful for constructive critiques.

Looking forward for the last videos of this beautiful class, thanks Matt and all of you.

Following the advice of Winston I tried to reduce angles of the 3pp image by slightly distancing all the 3 VPs. Let me know if now looks better. 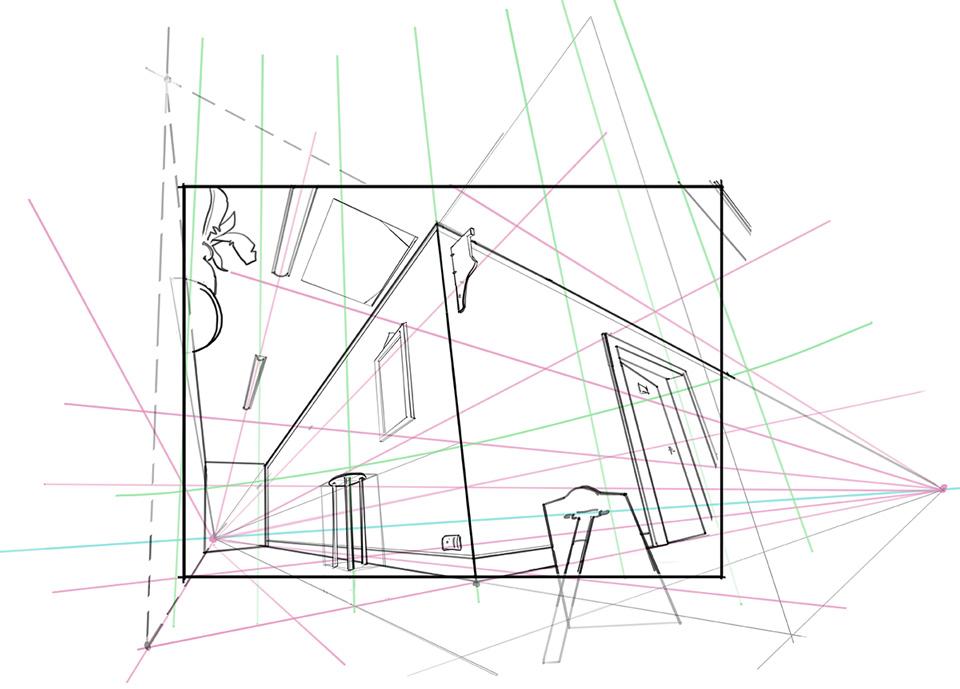 Usually I find really hard keeping alive my critical sense on my drawings of whatever type. Like the initial fresh view on the picture decreases as the time goes, which I know is normal. That's why the critiques are most welcome. One method I personally use to "refresh" my view is changing viewpoint by simply flipping the image horizontally, which quite often helps me to find out mistakes, mainly asymmetries. I need to speed up a lot my workflow too, this is crucial I guess, but do you know any other way to keep hard look on your own works?

Finally I resumed this project and I picked the 2pp to work more in detail: 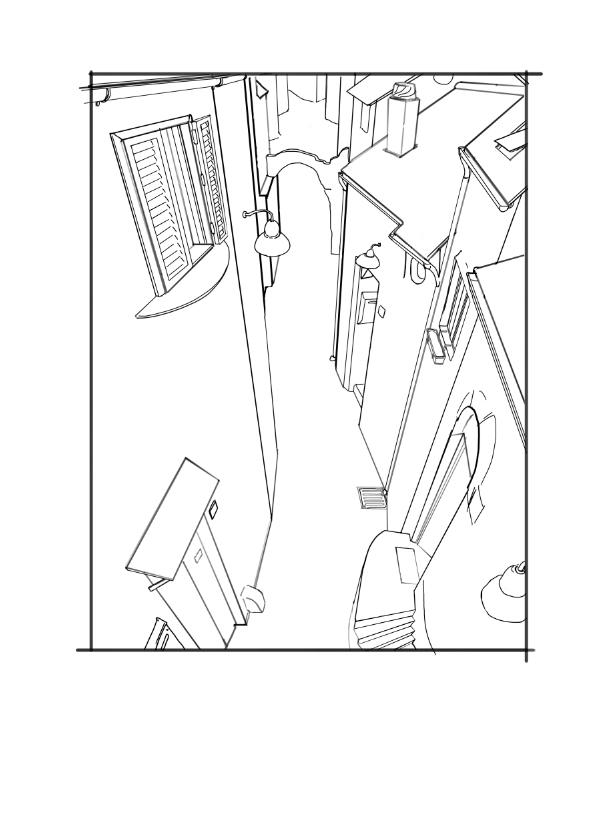 Next I'll come with at least some basic shading and other details all around.

Added various details and a hint of shading. In terms of outline, the biggest changes are the cat in the foreground, who seems to work well as for playing with scale (as Matt suggested in one of the videos, little objects made big relative to their proximity to the viewpoint) other than just introducing the first piece of the story I had in mind; and the background, now looks way better to me. The snapshot shows the image also without the shading so to better compare all the differences from the precedent: 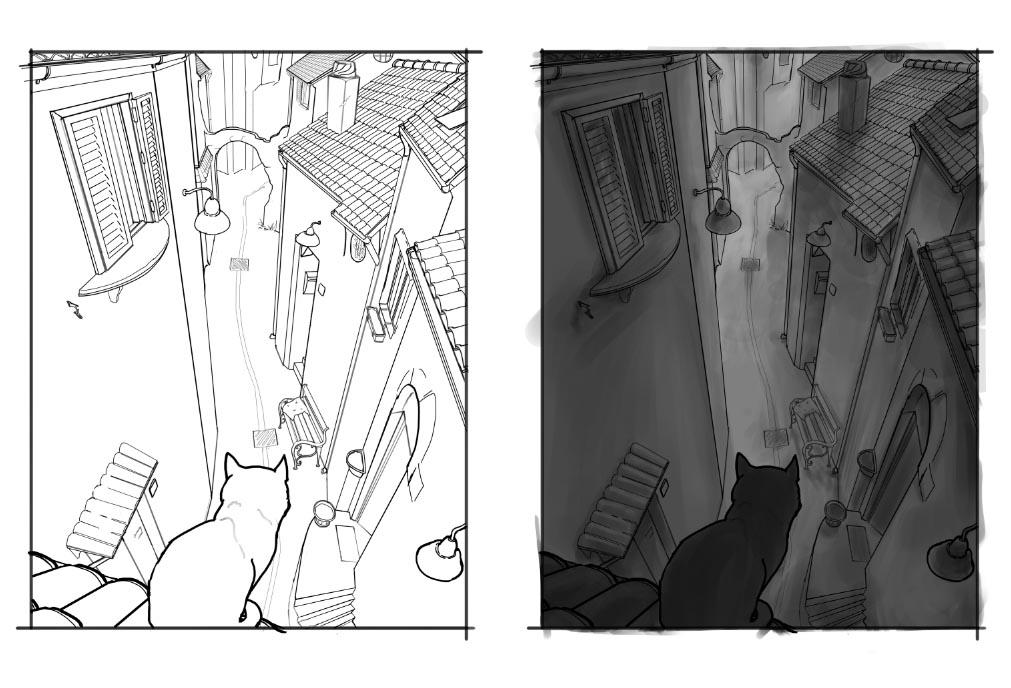 Clearly it needs some details as plants and other things according to Matt's tips. Anyway now it is starting to take form. I'll add some more cats all around the alley and I have in mind to color it too, for which I was thinking of night time in summer.

at least I think it could be the final as it's working quite well overall, even though there's room for improvement obviously.

As said, I added few other objects and the fellow cats. Left the color/shading pretty rough as it seems suiting well the drawing. I changed the project's name again (at every single update I think...) trying not to be banal, but I am very bad at giving names, so if you have a better one go ahead.

More important, give me critique on whatever aspect you think may be wrong or improved, so if you point out something I am able to work on, I may update it again. Thank you all! 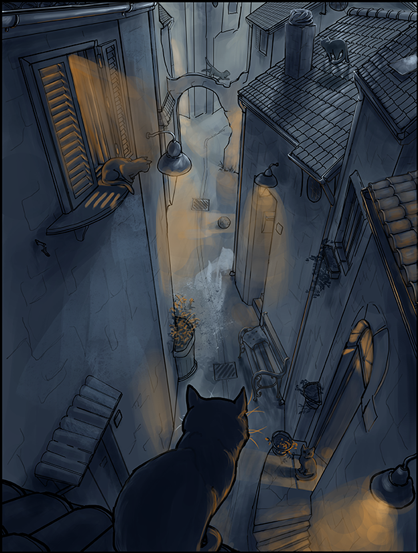 Ok, the last step needed obviously some refinement... I added a few details and fixed something; the main issue was the light on the wall directly exposed to the moonlight. Now should be working better also by contrast with those buildings in the shade. 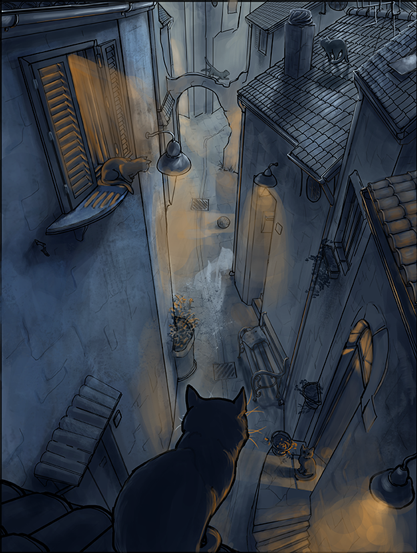 Most recent fixes and different presentation:

so I tried to implement those correctives suggested by Matt. I also wanted to show it unframed, as I thought it suits the style of the drawing better. What do you think? 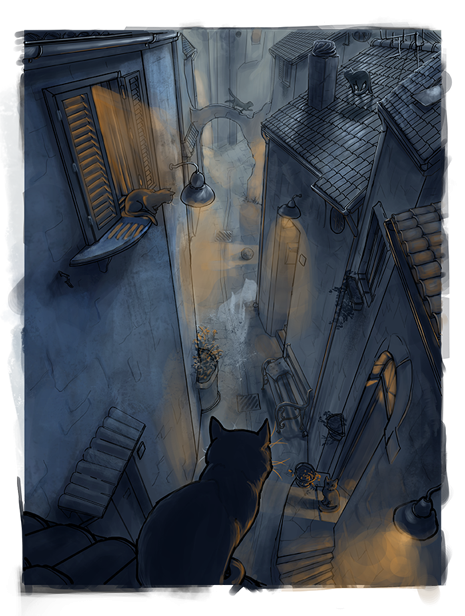 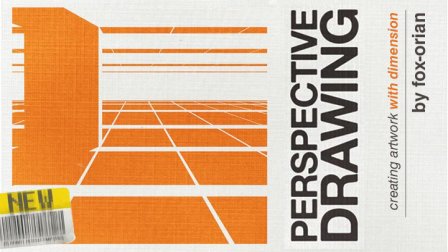