The hidden lives of human directionals: There are real people with feelings inside those costumes

Throughout college, and now, as a freelancer, I have worked many odd jobs to pay the bills. It's not very glamorous, and it's always something different, but I wouldn't trade all the interesting, fascinating experiences for anything. The financial mainstay I've kept up for the past few years is working the streets. And not in the way you might think. You've seen them on the side of the road, dressed in strange costumes. Dancing. Gyrating. Twirling signs and making a scene.

We are human directionals. You know the wacky people you see on the side of the road waving signs and dancing wildly, waving, listening to music, and trying to get your attention? That's me. I'm contracted by a company to go to different leasing offices dressed in a costume of their choice (some of the characters I've been include: Easter bunny, leprauchaun, Dorothy from The Wizard of Oz, cheerleader, and hula dancer), and I go buck wild for a few hours. Other times, we are commissioned for events with a local hospital to don their mascot costumes and walk around greeting hospital patients as these big blue and green foam people. 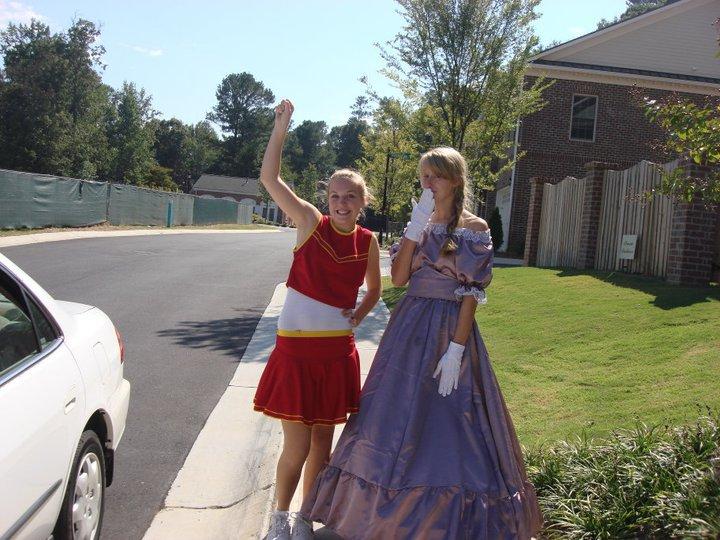 Two friends of mine on the job, as "Cheerleader Girl" and "Southern Belle."

I've seen a lot of bizarre things on this job. A lot of bizarre things have happened to me. People forget that there is a real live person inside the costume, someone with feelings. People will walk up and ask incredulously what I'm doing out there? They suggest that I "get a job," although this gig pays $20 an hour. I've been treated like a second class human simply because I make a living in costume, on the side of the road. I've seen peoples' days completely turned around for the better when I smile and wave, and try with the best enthusiasm I can muster to lift their spirits while they wait at a stoplight. Veteran directional, Lydia Benitez has been working the Atlanta streets for years, and enjoys doing it. When she was put in the Winnie the Pooh costume that hides her face, she said, "The only downer is that I can't make eye contact with people passing by and feel like I'm bringing a little cheer to their lives."

I'd like to pitch this story idea to a publication like VICE or Rookie. Because the job is a bit offbeat, but something everyone is familiar with. Any time I bring up this job in conversation, everyone wants to hear about it, and is amused to have met someone who actually unashamedly does this for a living. With such high rates of unemployment right now, I also think that people are interested to hear about alternate means of income. It's different, and it's funny. I do this job along with several of my friends, and thus have plenty of people to interview for additional stories and anecdotes about things that have happened to them on the job, like James Fairchild, who told me, "I would get smashed the night before so I wouldn't care about dancing in front of traffic the next morning."

This article will tell how directionals cope with the unbearable Atlanta heat, and how we manage the boredom and loneliness that can accompany the job. It's an underworld that I think people would be interested to learn more about in a lighthearted manner.