Hey Benny, LOVED the class! I think I commented on your Instagram saying how I've always been interested to know the process behind the Highsnobiety logo and it was fascinating to see. The word association exercise in particular has really helped me refine my process and confirmed a lot of things in my mind.

On to my project, I'll give you a quick bit of background on it. This was actually a mock brief created by Fuman that I had undertaken during my second year of uni. I wasn’t really happy with the outcome of the project originally and have been wanting to redo it ever since graduating. As soon as I saw this Skillshare class it knew it was the perfect opportunity to give it another whirl.

In summary, the brief was to create a brand identity for an organic food store called 'The Wilderness' who specialise in fresh produce and raw meat products. What they see as making themselves unique is that their products are devoid of any fertiliser residue, pesticides, herbicides, genetic modification and synthetic preservatives. They're based in an upmarket area of Auckland, New Zealand with an audience profile of; people that are Health Conscious, Housewives of the area, Sports teams, Gyms, and people with Disposable Incomes. Five keywords that describe them as a brand are - Healthy, Honest, Fresh, Real and Approachable.

From the word exercise I was able to figure out 3 solid directions to head down, all of which stem from the Raw Meat positioning. Highlighting this part of their business sets them apart from their competitors as other organic stores tend to have a vegetation focus. With this in mind the key icons I've landed on revolve around a Hunter Gatherer - these are an Eagle, a Claw and an Arrow. The design style these need to incorporate have to be high-end and contemporary to appeal to the target audience more accurately.

All 3 of these icons represent hunting very strongly - they're raw, sharp, and real. Hunting is generally looked down upon because of trophy hunting, but if you're hunting what you then go on to eat how is that any different from an animal in the natural world? The irony of this is people who think of hunting as disgusting would also tend to have no issue with eating a 6 pack of chicken nuggets... but thats getting off topic. The point is the target audience are aware of what they're eating and are choosing to shop at The Wilderness for quality meat instead of eating factory farmed products.

As an animal the eagle is seen as elegant and strong, yet the way they hunt is swift and raw. They sink their claws into prey and rip them apart piece by piece with those sharp beaks. I had tossed up whether or not to make a more illustrative logo to articulate this but I think sticking to something that was clean and bold would be more appealing to the target audience. In terms of practicality using something like this means we can scale it up and down depending on where it’s needed, from the store front to the receipt dockets. In regard to the creation of the design I really didn’t want to round out the logo too much as having that sharpness speaks to all those ideas above and reinforces some of the other ideas and tools related to meat, i.e sharp knives and cleavers. What I was cautious of though was trying not to give it too much of an American flare since the eagle as an icon has so many roots in that patriotic space - I think where I've landed doesn't step into that realm though.

This concept echoes the similar ideas within concept 1, this time visualising the claw of an eagle into a w-like shape. As seen in the moodboard an eagle's claw is really intense I wanted to highlight that strength and the power they must have when they latch onto their prey. In a way this could even be interpreted as 2 wings and the eagles head but I wouldn’t call that obvious nor intentional. My worry with this outcome is whether or not the W is clear enough, I think it is but I may be jaded from staring at it for so long.

What I had originally envisioned with this one was a Spear icon, but it then morphed into a Bow, then an Arrow then simply an Arrow Tip. As with the other 2 concepts I wanted to try work the W into the design, which I think in this outcome has been done quite subtley. My only problem with where I’ve landed is that it makes me think of the Foot Clan logo from TMNT, but I think its different enough to stand on its own. Idea-wise I think its fairly self explanatory, using a sharp implement to stab prey is how Humans have hunted since we began to evolve - nothing speaks to the raw, real food angle more than that!

Of the three I'm in love with the Eagle concept. I'll be looking to finalise this with a few mockups and colour ways to flesh out the brand as a whole, but for now I leave it with this lock up using the font Dragon Serial by SoftMaker.

Keen to hear your thoughts Benny! Thanks for putting this class together.

Revisited this project after receiving your feedback Benny as well as from Sean Taylor. Decided to test out a variety of San Serif faces to combat this contrast:

The above are Century Gothic, Optima, Trade Gothic and an old-timey Sign Painter style font. I can see all of which working, but of the lot I'm leaning toward Optima or the Sign Painter, more the Sign Painter as it has a bit of a sharper feel to it, and the contrasting weights within the letterforms make it feel almost knife-like. However I wondered whether the lock up itself could be an issue, because while I do love how balanced it feels I wonder how practical it would be in the real world.

Went on to do the same testing with 'The Wilderness' running on a single line. Already this version is starting to feel a bit more solid and realistic. Again my favourite of them all is the Sign Painter option.

From here, I took on Benny's advice of playing around with how the Symbol interacts with the type. There are two ways to interpret this, either the optical sense of how the symbol and text work together OR place the symbol literally within the letters and let it play, which I have done above to mixed results. The bottom left is the stand out, however the downfall is that it puts too much emphasis on 'THE' and the symbol becomes lost in the text.

Further experimenting led to testing out some scripts on 'The' to soften it's appearance, and also give it a bit of a vintage look. However it now feels like there is far too much going on! So I reverted back to where we were and landed on what I feel are the finals:

So thats my revision, if you've got any more feedback or think I've gone way off track let me know. I should mention that the font face used is a font called Sgt Peppers Lonely Hearts Club but I referred to it as a Sign Painter font so that there weren't any connotations to The Beatles, since it has that flare of an old sign painter hand book. 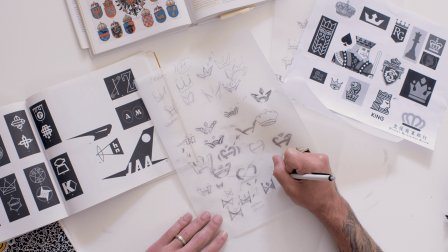