Works of art produced during the high renaissance represented the shift from religious faith to human values, reason and critical thinking. This essay is a comparative analysis of two such art pieces from the high renaissance period: Two oil paintings, “The Virgon of the Rocks” by Leonardo, and “The Virgin and Child with the Infant St. John the Baptist” by Raphael. Both paintings depict Virgin Mary seated in between young St. John the Baptist and Jesus Christ in an outdoors setting. While these paintings share similarities in composition, style, and technique characteristic of the high renaissance, close attention to the way Mary is portrayed reveals key differences. Raphael’s choice of color, gesture and clothing exudes youthful, motherly boldness. Mary in Leonardo’s painting, by contrast, displays reverence through her gesture, understated color, and demure clothing.

Similarities between Leonardo and Raphael’s work include pyramidal composition, softened outlines, and atmospheric perspective. With Mary in the center, Leonardo forms a pyramid with St. John to the left, and Christ plus an angel to the right. Raphael composes his painting similarly, but with Christ standing to the left and St. John to the right. The pyramid was a common compositional format and represented balance, order and beauty. Both paintings also display softness and a naturalistic appearance to the figures’ expressions and surrounding foliage, which was achieved by gradually transitioning between colors and tone. Interest in math and science motivated artists to focus more on perspective, one being atmospheric perspective. Leonardo and Raphael explored atmospheric perspective by including landscapes in the background of these paintings.

It is interesting to note the differences in the color of Mary’s dress. A toned down red dress and green cloak in Raphael’s painting and a subtle blue dress in Leonardo’s communicates youthful grandeur versus modesty respectively. Brighter colors were used overall in Raphael’s work, further conveying a light, jovial feeling. Furthermore, Mary is the only figure wearing colorful clothing making her stand out boldly. By contrast, Leonardo uses darker, subdued colors, expressing a more humble tone. Mary’s blue dress and cloak almost blend in with the background, keeping her presence quiet and reserved.

In addition to the color of Mary’s clothing, there is a difference in how it is worn. Mary in Leonardo’s painting is modestly dressed with her cloak worn correctly over both shoulders and buttoned at the chest. Conversely, Raphael paints Mary’s cloak hanging off her left shoulder, flowing behind her, communicating a less constrained mood.

A closer look at Mary’s gestures, specifically her hands and feet, adds to the effect. The right hand of Leonardo’s Mary is wrapped tightly around St. John the Baptist’s shoulders while her left hand reverently hovers over the head of Christ. While Leonardo’s Mary avoids touching Christ, Raphael’s Mary has both hands embracing him as a mother would to her child. The intimate practice of skin-to-skin contact between a mother and her newborn baby is personified through the placement of Mary’s hands and illustrates her as more of a mother figure. Raphael also subtly exposes Mary’s left foot. Perhaps this was Raphael’s attempt to remind the viewer of Eve, who roamed naked with God before she became the mother of all creation.

Although both paintings share many similarities in format and technique, intentional use color, gesture, and clothing differentiated Leonardo’s from Raphael’s. Raphael chose to portray Mary as a mother embracing young Christ while wearing flowing, colorful clothing. Leonardo, on the other hand, called less attention to Mary, keeping her appearance proper and respectful.   In their own respective ways, they helped evolve the religious art of the high renaissance from its more traditional origins. 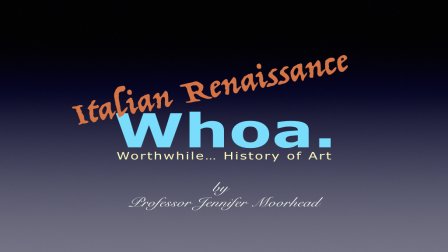 Worthwhile...History of Art: The Hidden Meanings of the Italian Renaissance
Jennifer Moorhead