The Sketchbook Project is a traveling interactive art exhibit. It showcases sketchbooks from all over the world (130 countries, to be exact), and is totalling over 22,000. The issue now resides in getting more sign ups, following a re-vamped business model that allows for submissions all year around.

According to Google Search Trends, people don't even search for The Sketchbook Project.Via Topsy, the video produced by a London based company about the Project's exhibition there is the most viewed, and the most influential link published by an editorial was 2009. None of this is very convincing for the project. The facebook page analytics claim that the most popular users are women aged 25-34 that are from NYC. Clearly, the business problem resides in driving more traffic to the website, but also in the "discover" stage of the buying decisions.

Goal: To get consumers to consider the Project a valuable opportunity, and to understand the benefits that occur year after year upon joining the project.

Insight: The consmer may not see the tangible benefits that they will receive from the project.

People may also not realize that it’s not just a simple project to complete and that's the only aspect of the Sketchbook Project. In fact, there’s a community they are joining and it’s something they can partake in continually.

Question:How do we get the conusmer to see the value, and the continual nature of the project?

Tactical insight:
Social Media offers a number of ways to connect the community, and to highlight the benefits of the project via the consumers that have taken part.

(Establish the brand as a community that is full of people that you want to talk to, learn from, and generally join. Additionally, establish the project as something that you will benefit from year after year)

2. Do a twitter campaign of “What does the sketchbook project mean to you?”

3. Show the benefits from the very beginning using the community as support (their videos, their comments, their support...etc.)

4. Focus more on the "sketchbookers”.

Potential tactic: Using specific characters that the brand would depict, follow these characters through their journey with The Sketchbook Project from sign-ups to getting notifications that someone has viewed their book years later. 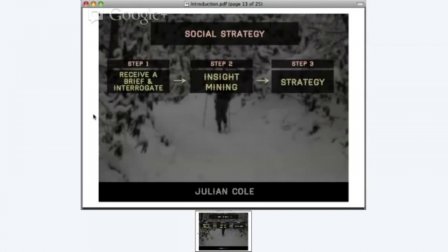