The Seat on the Right

Great class, very detailed and so much useful information! I don't really know if my idea and skill level is good enough, so I'm looking forward to some brutal honesty here. I've got to say, though... the bit of comic I drew was a lot shorter in my head than it ended up being! It's pretty much a sketch, but I'm also uploading an illustration of the characters where you can see my style and the colour scheme. Anyway, here's my pitch!

THE SEAT ON THE RIGHT

'The Crown': a mysterious, omnipotent and untouchable figure reigns supreme in her own realm, but not always by herself. To her right exists a seat that technically anyone can take to be heard and even help lead. A group of very close friends is obsessed with influencing the Crown as much as possible. However, their drives and wishes couldn't be more different. Will they learn to understand and accept each other? Can their friendship survive through their selfishness and greed?

- The Warrior (adult): stoical figure with a powerful presence. She's a hardened fighter who believes in justice, and even though she can be a bit intransigent, her heart will always be in the right place (at least according to her own judgment!). Despite being dependable and liking to help, she can be quite harsh, cold and pushy.

- The Lady (teen): elegant and demure, this shy girl is most comfortable feeling small and not drawing attention to herself. However, there sure is a lot going on inside her! She's highly imaginative, dreams of Platonic romances and loves fantasy. She struggles with depression and self-esteem issues. The Lady is constantly frustrated because she wants to take the seat on the right, but the rest won't give her a chance.

- The Hellion (teen): some people just want to see the world burn! This misfit is fiery, energetic and chaotic. It's a bit hard to deal with her because she tends to be needy, cocky, egocentric and even aggressive. But despite always looking to cause trouble and mischief, she's got a caring soul inside.

- The Hunter (adult): this seasoned survivalist in a manifestation of common sense and is very wise. Too bad he can't speak! Or maybe he just doesn't want to. In any case, he's a prudent and patient person who doesn't like nonsense and has a very practical view of things. He's very reliable and sensible, but sometimes it can be hard for him to think outside of the box.

There is sooo much more I could say about the characters... also, there are a lot more secondary characters, but those four are the ones that appear the most.

WHY MY STORY AND WHO IS IT FOR?

My novel's got very developed, believable characters that have deep and unique motivations and personalities. The story is supposed to be an analogy to the mind, where 'The Crown' is our own, neutral minds, and the characters the voices inside; the fruit of experience and knowledge that's taken the shape of people (and a wolf-dog that represents primal fear). It's aimed to young adults who are starting to explore the inner works of their minds and might be confusing with the different voices that are trying to lead them. I believe it's a somewhat unusual concept that could help youth understand themselves and even teach them self-control.

Anyway, here's the strip. I think this would probably make for about 4 pages, depending on the format. This whole thing's an idea I've been working on for many months, but I had not put on paper yet. Thanks for giving me the perfect excuse with this class, and I hope I get some feedback! Even if it's not "good" .... as you said, to be rejected doesn't mean you're bad, right? :P 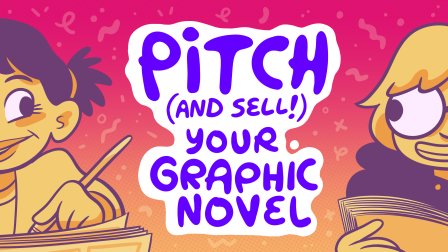 Pitch (and Sell!) Your Graphic Novel: A Beginner's Guide to Getting Published
Ira Marcks