My choice of fairy tale is Jack and the Beanstalk.  Upon further research, it seems that modern retells of the story have added elements to make Jack's motive's more morally justified.   The original story has poor Jack told to sell the milkless cow.  He instead trades it for Magic Beans.  Upon returning home, his mother calls him a fool and throws the beans out the window.  Overnight the beans grow into a stalk that reaches the sky.  Jack climbs the stalk and finds another world above the clouds;  a world of giants.  A large woman lets him in and feeds him.  Her husband comes home and smells Jack's presense.  "Fee Fi Fo Fum, I smell the blood of an Englishman!  Be he alive or be he dead, I'll grind his bones to make my bread!"  His wife convinces him that there is no Englishman, she feeds him and tells Jack to leave when he falls asleep.  Jack then goes back down the beanstalk.  He comes back more times to steal a Hen that lays golden eggs, gold  and then again to steal a harp that plays itself.  When he steals the harp, the giant wakes up and finds him and chases after him, down the beanstalk.  At the bottom, Jack chops the beanstalk and the giant falls to his death.

The suprise element is Jack is a hipster.  Not a boy, but still living with his mom and penniless.  He puts his faith in magic beans, but then ruthlessly abuses a woman's kindness by stealing from her husband and then killing him to get away with it.

Here is a link to my illustration inspiration board:  https://www.pinterest.com/obitayg/characters-with-character/ 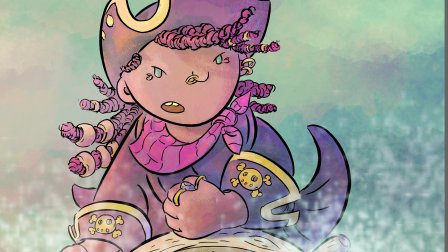