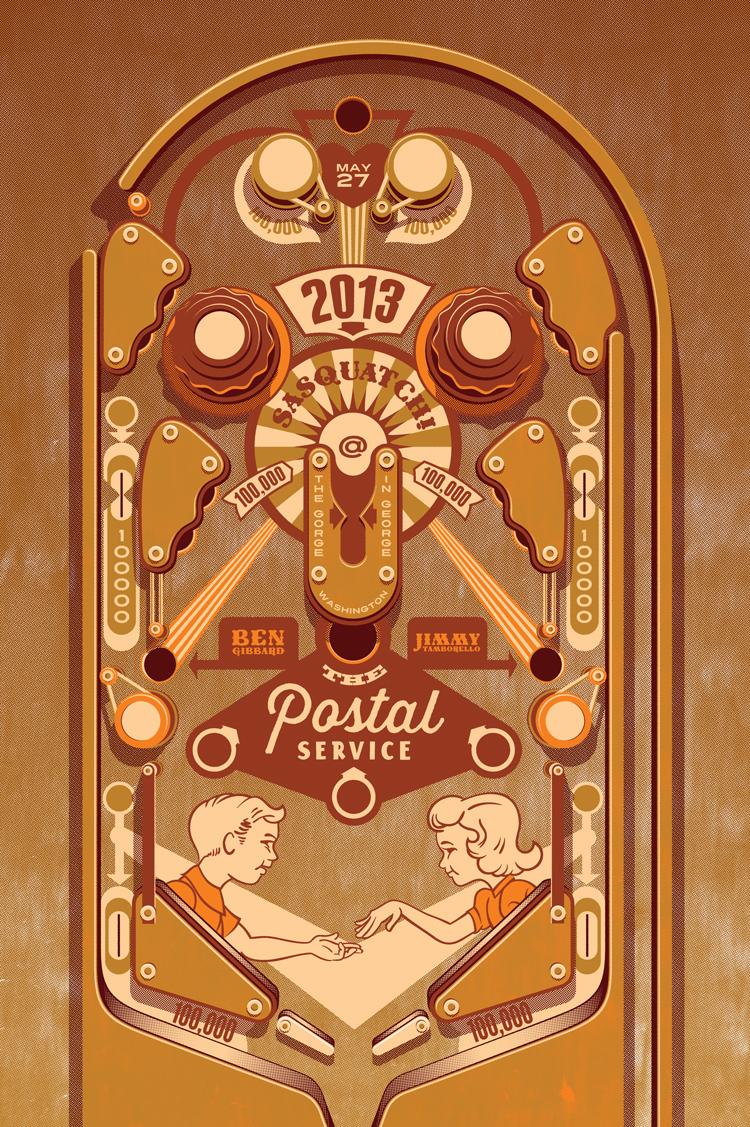 Well, here is where I arrived after a super fun, well-taught, amazing class on something I knew next to nothing about. For the final version of my poster, I ended up using five colors plus paper (I don't know how Dan and Nate get away with less). I decided to limit myself to the screen printing production methods taught in the class, using half tones to achieve tonal range.

I chose the Gorge Amphitheater venue, since it's a few hours from where I live and it's sold out. For non-Northwest natives, the Sasquatch Festival that takes place there is an annual three-day event featuring all of the bands you want to see in your life. 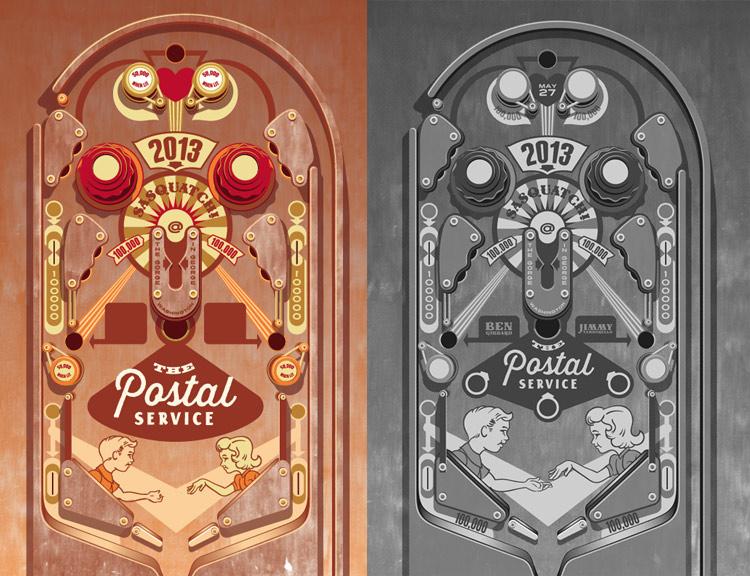 This image shows the look I was attempting to achieve, although the texture is perhaps a little too realistic. I opened my poster in grayscale by accident, and thought it had a "Leave It To Beaver" sort of feel, which I thought was cool for sure, so I wanted to show it. 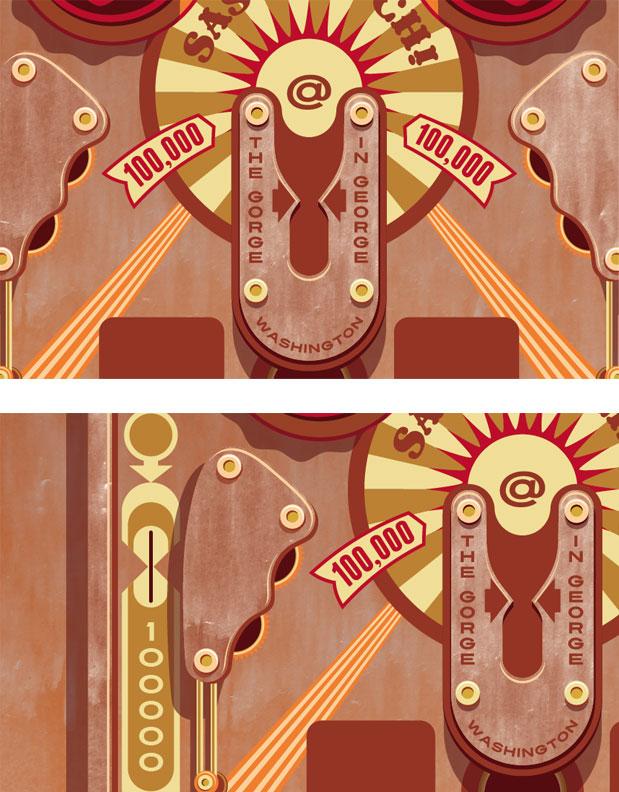 A closer view of the above left image I was working from. 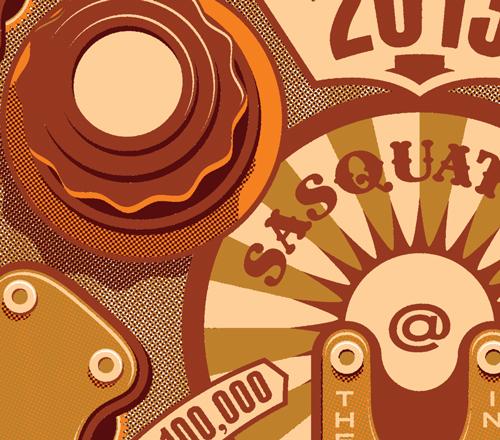 Detail of the half tone pattern and texture.

Things I would like to do to feel that this poster is complete:

Give a little more attention to the illustration of the boy and girl. I picture them looking like a Lichtenstein; more linework and half tone shading.

Incorporate a little texture into the flatter/solid elements of the design, like the background of "The Postal Service", and the parts of the pinball table that light up when you hit them.

Things I've learned from this class:

Creativity does not have to be limited to production methods.

I will no longer neglect layer/file management.

A magician never reveals all of his secrets.

Thanks Dan and Nate! 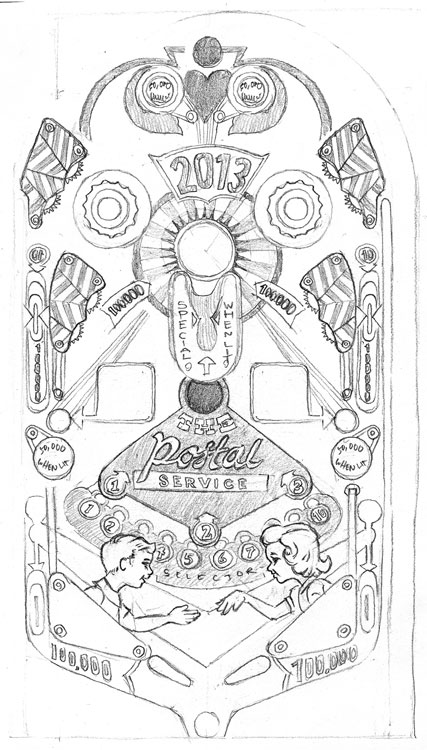 The other day I had the very fortunate experience of hearing a song on the radio and saying to myself, "Is this The Postal Service?!". Fortunate, because I heard it before I had the chance to hear about it.

For me The Postal Service has always been about a longing for a simpler type of love. There's obviously a deep feeling of sadness, but it's presented on a piece of bubble gum. It's like knowing how futile it is to try and recapture your childhood, but goddamn it if you don't try everything you can to do so. Only with love. Sorry to wax poetic, but I love this band!

For my concept I wanted to avoid imagery dealing with the literal take on the name, and shoot more for a mood. The pinball machine is meant to be a reminder of a much simpler time; a metaphor for young love that doesn't take itself too seriously. 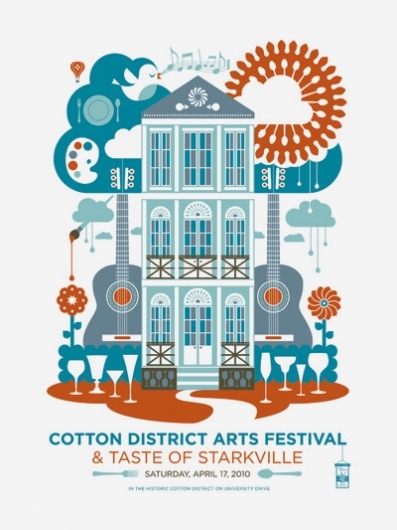 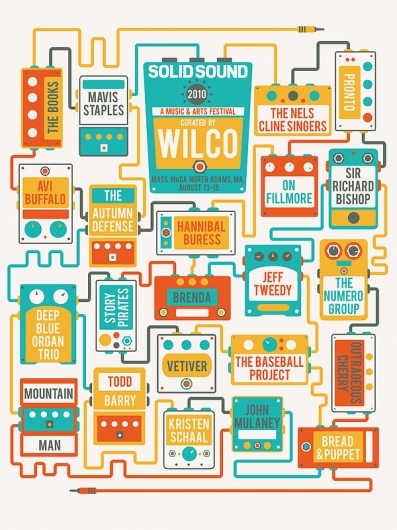 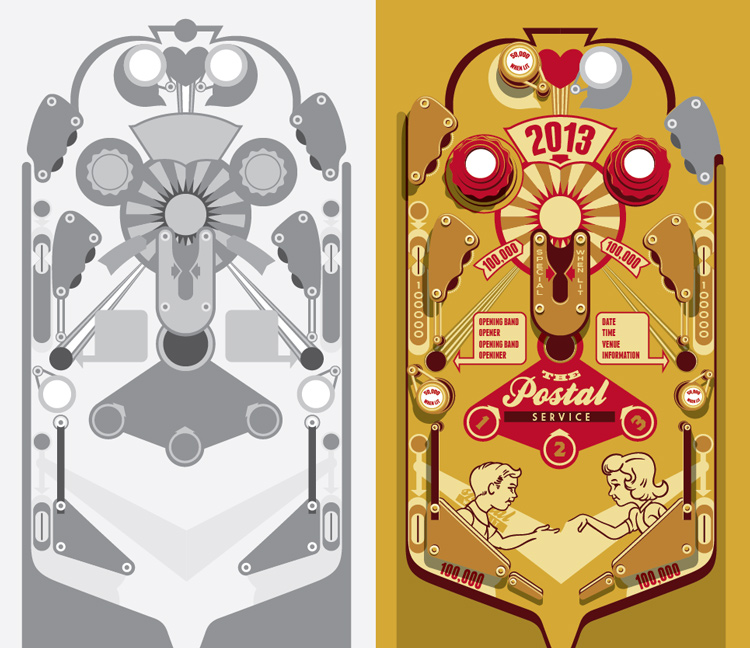 I have decided to do two versions of this poster :P I was torn on how to execute it, and am still open to suggestions. I approached the shape building in a very flat, two-dimensional way, using a simple grayscale palette in order to get my values straight. Once I had everything pretty much where I wanted and started adding color, I started to gravitate towards a more dimensional style (right). I was hoping it was still somewhat true to the original inspiration, but with just a little more visual interest (but not so much that it's overwhelming).

There was a huge response to the original inspirational images I posted, so I fully intend on making a version based on simple and flat geometry, and trying to distill the shapes down to their essence to try and say more with less. The one thing I love about those images is the use of white space, which is something I want to try and incorporate more of in both versions. 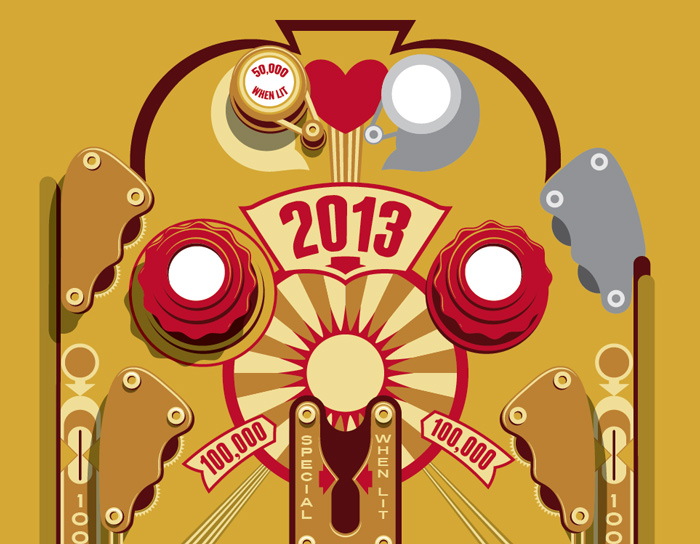 Detail of the top portion. Slowly adding details from left to right. 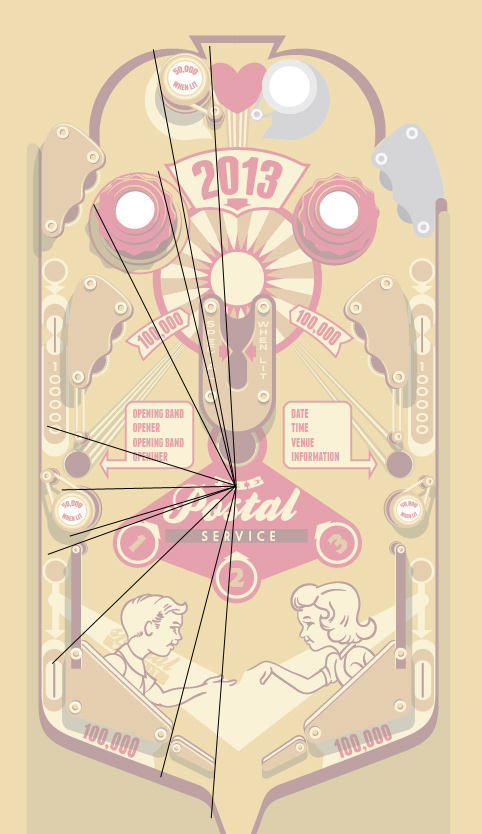 Given that there is a lot going on in this poster, I decided to use perspective to draw the viewer's eye to the main piece of information: the band name. In the final version, I hope to manipulate the value scale with texture and gradient (likely a halftone pattern) to make this more apparent.

Most of the typography uses placeholder type. I am going to draw the band name by hand, and search for old-timey fonts that are more appropriate for supporting information.

Toying with the idea of a simple, gaphic wood texture for the parts of the pinball machine that are raised and riveted down.

Open to suggestions for background treatment.

A cool/warm color palette option. I like the color palette I have, but it's almost monochromatic. I would like to explore an option with a little more variance.

What does everbody think about the flat version versus the (slightly) more dimensional version?

I started experimenting with a darker color palette, and ended up trying to create a version with a central light source. I think this idea has the potential to be pretty cool, but I don't really think it adds anything to the design. I do kind of like where the version on the right is going though... 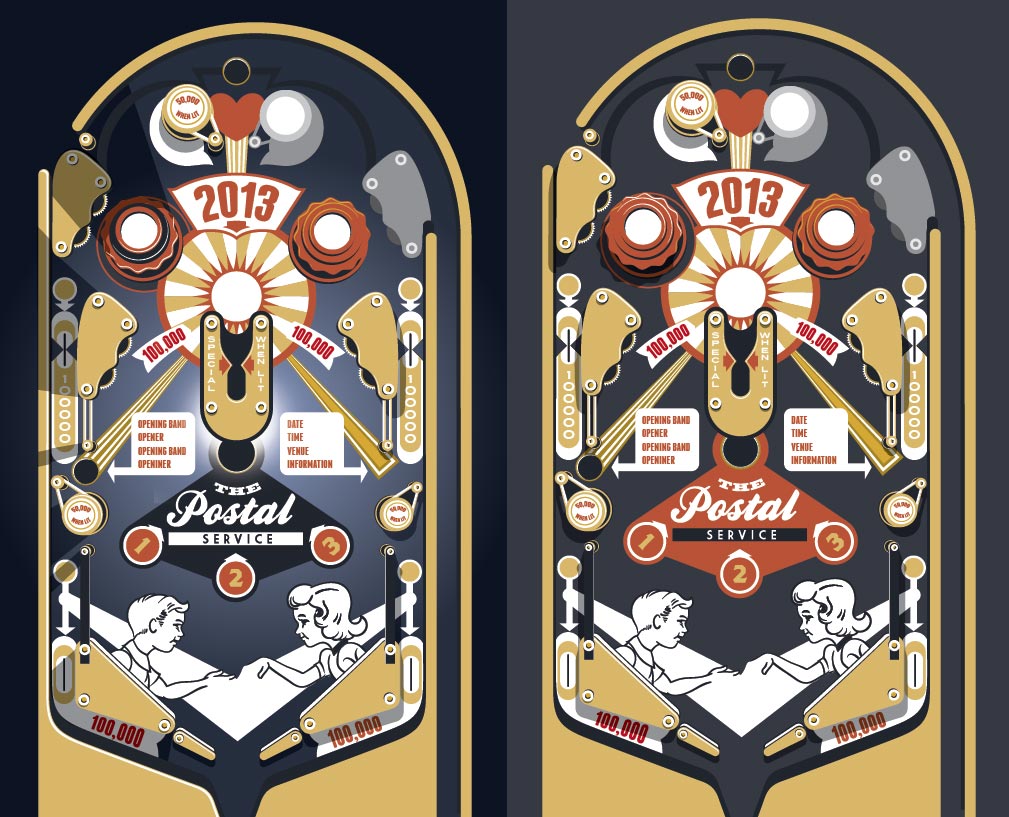 Here's a version with a little more figure/ground separation: 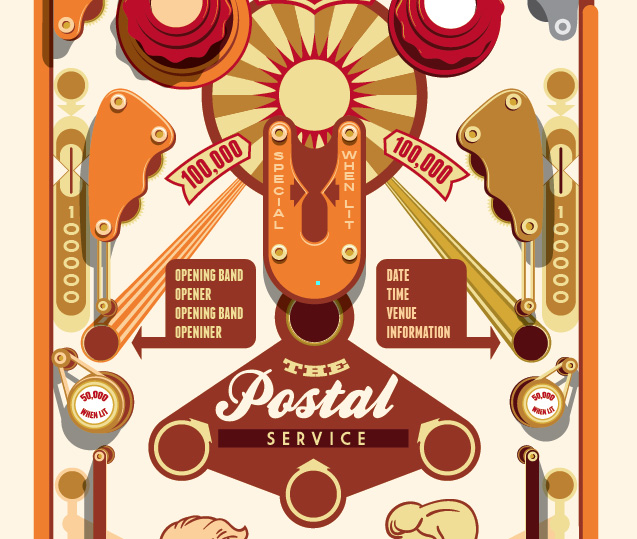 I have also been fooling around with adding texture. I decided to keep the color range for the poster within reasonable screen printing range, and my attempt at doing things the DKNG way fell a little flat. At the moment, I am attempting to use vector shapes and simple textures, but I will continue to experiment with half tones and bitmaps. 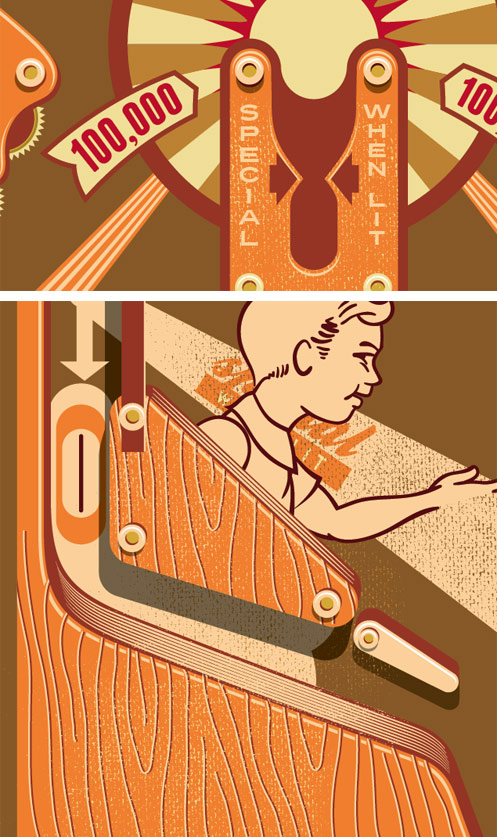 I was hoping to at least have the entire band name sketched out by today, but I got off to a false start with the word Postal, and ended up with just Service. The typeface I created is supposed to look a little vintage, to match the table. I'm hoping to have the Postal script sketch uploaded tomorrow.

Settling in on this sketch for the band name: 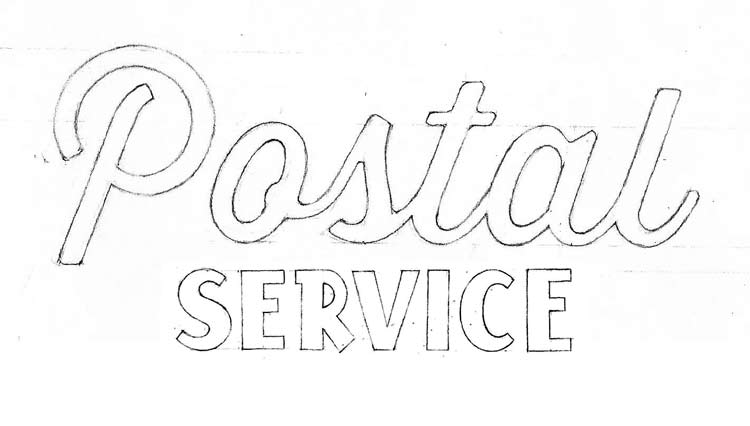