The Loud and the Quiet Musicians

31/3 I originally set myself the challenge of doing a loud and a quiet animal musician. So now adding a flute playing fox - I'm not sure if it says "quiet" quite enough - but as the project moved on I came to focus more on having them work more as a set and playing around with textures and trying new things rather than sticking too rigourously to the brief.

I've changed the" Happy Birthday"letters on the badger from the previous version. I wasn't happy with so much background showing through but nor did I want them really jumping out - so I've used them at 90%. 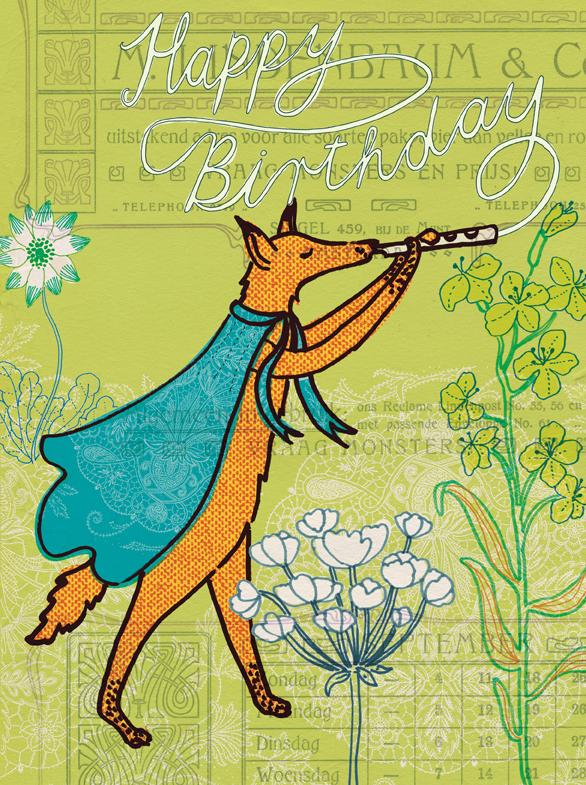 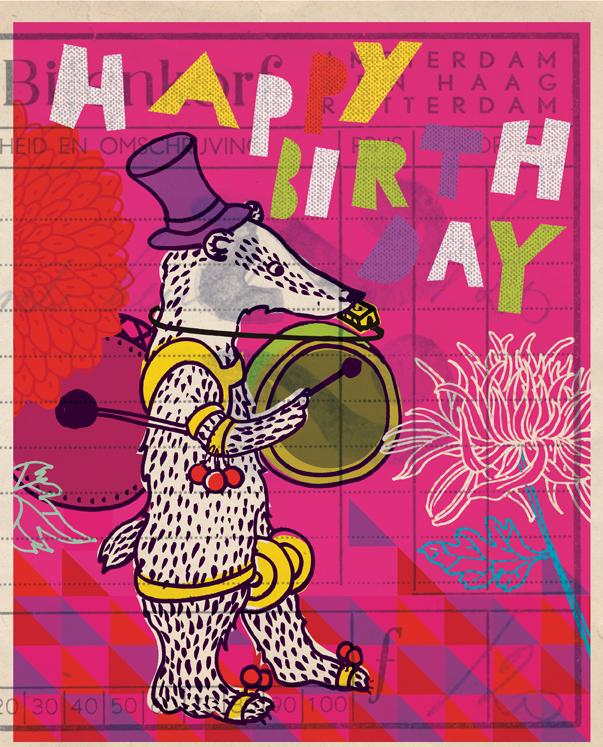 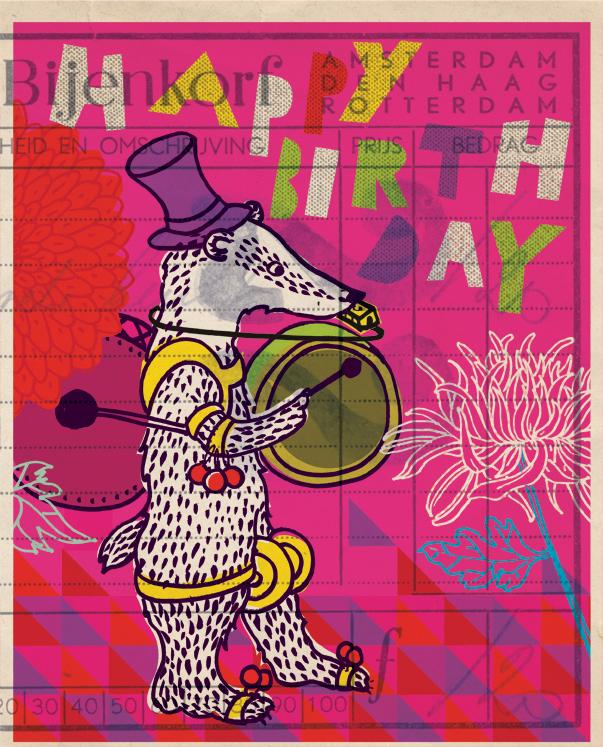 Perhaps the old bit of paper is competing too much with the Happy Birthday letters?

I tried putting the letters on the top layer but it felt too seperated from the rest of the image? Any thoughts?

The first version I did was just too loud for the fine line weight - so I drew the badger in a much thicker line and darker colour than I'd usually use. The checked triangles are much more graphic than I'd normally do and "made " in Illustrator while usually I draw everything on paper and use live trace. The lettering and the shapes behind the badger are all rough for now - until I know what I want to do with the texture...though now concerned there isn't much "room" for texture too. I'm thinking I might keep the background flat and add several different textures to the letters. I'm really looking forward to the next section of the course on texture. 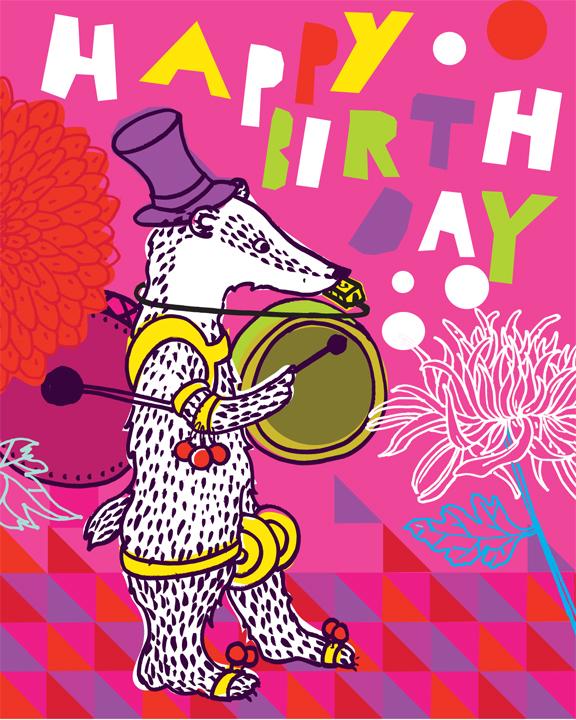 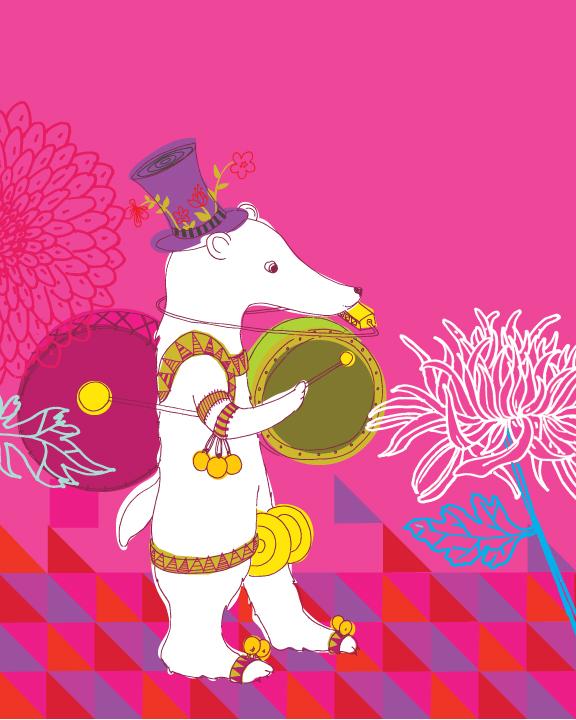 I was very tempted to do something pattern/abstract based but kept getting drawn back to this sketch I did a few months ago - on the theme of "The Intimidating Musician". I'm going to try and do two pieces of work - one for Loud and one for Quiet - I hope this doesn't turn out to be too over ambitious! I really liked what Brad said about having restrictions. I'm setting my restrictions in that I want them to work as Birthday Card designs and I want to find a way to say Quiet and Loud in the type as well as the images. 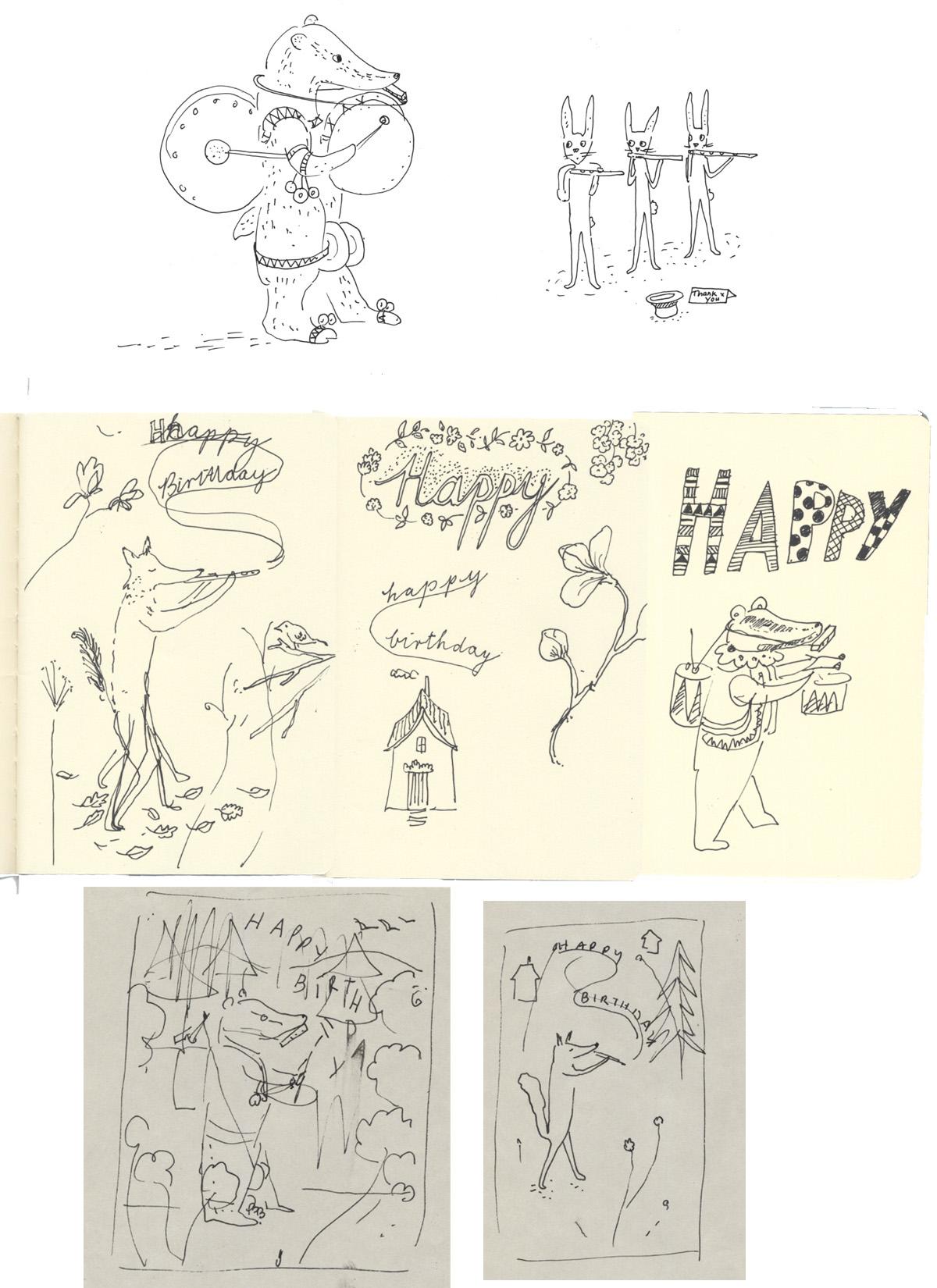 I was drawing a fox for Quiet but think I'll go back to the rabbit/hare idea as more of a contrast with the stomping solid badger.

The drawing below was done on my ipad (under my duvet at 2am after watch the second set of videos).

Though I've played with the Brushes app before this is the first time I've used it for doing roughs/getting ideas down and loved the discovery that I could email it to myself and open it up on my computer in the morning! (I'm very low tech so easily impressed!) Ultimately though I still love a sketch book and pen best. 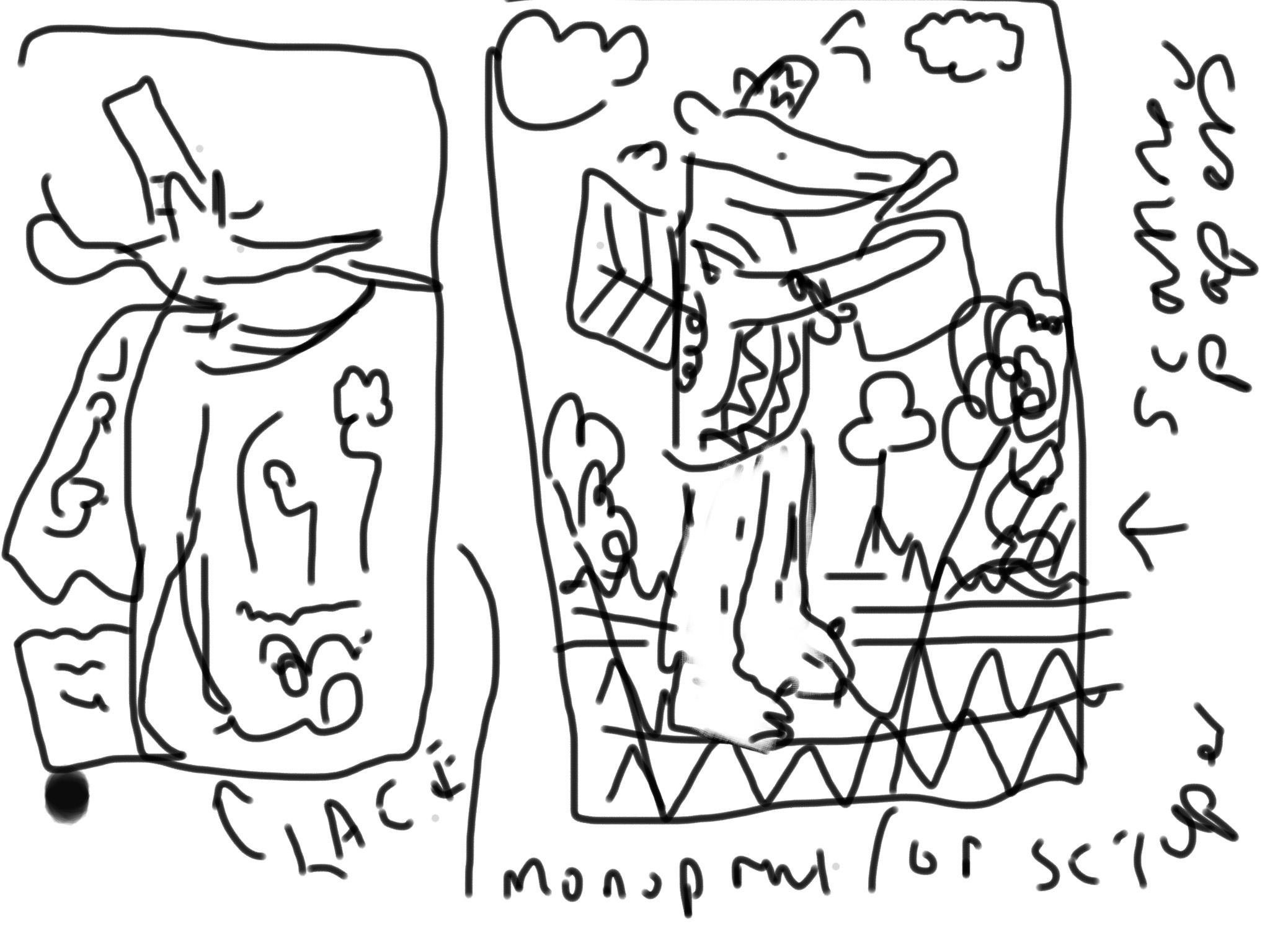 Though I've been using Illustrator for over fourteen years I still believe I only know about ten things. I usually hand draw everything on paper and use Live trace and just use Illustrator for "collaging" the elements and adding areas of flat colour. So I watched Brad's additional video on getting started in Illustrator and learnt several new things.

The picture below was an experiment with some of them. I usually "mix" all my colours myself with the cmyk sider but tried the blend tool and got some orangey analogous colours and also the blended hill side and on the tower I used the technique he showed of flipping half a drawing to get a symetrical  look. What I also discover was that by playing around with tools and windows I don't usually go to I discovered several new things - I didn't know that the blend mode (?) options I use in Photoshop was also available in Illustrator. Which was a hugely helpful discovery. 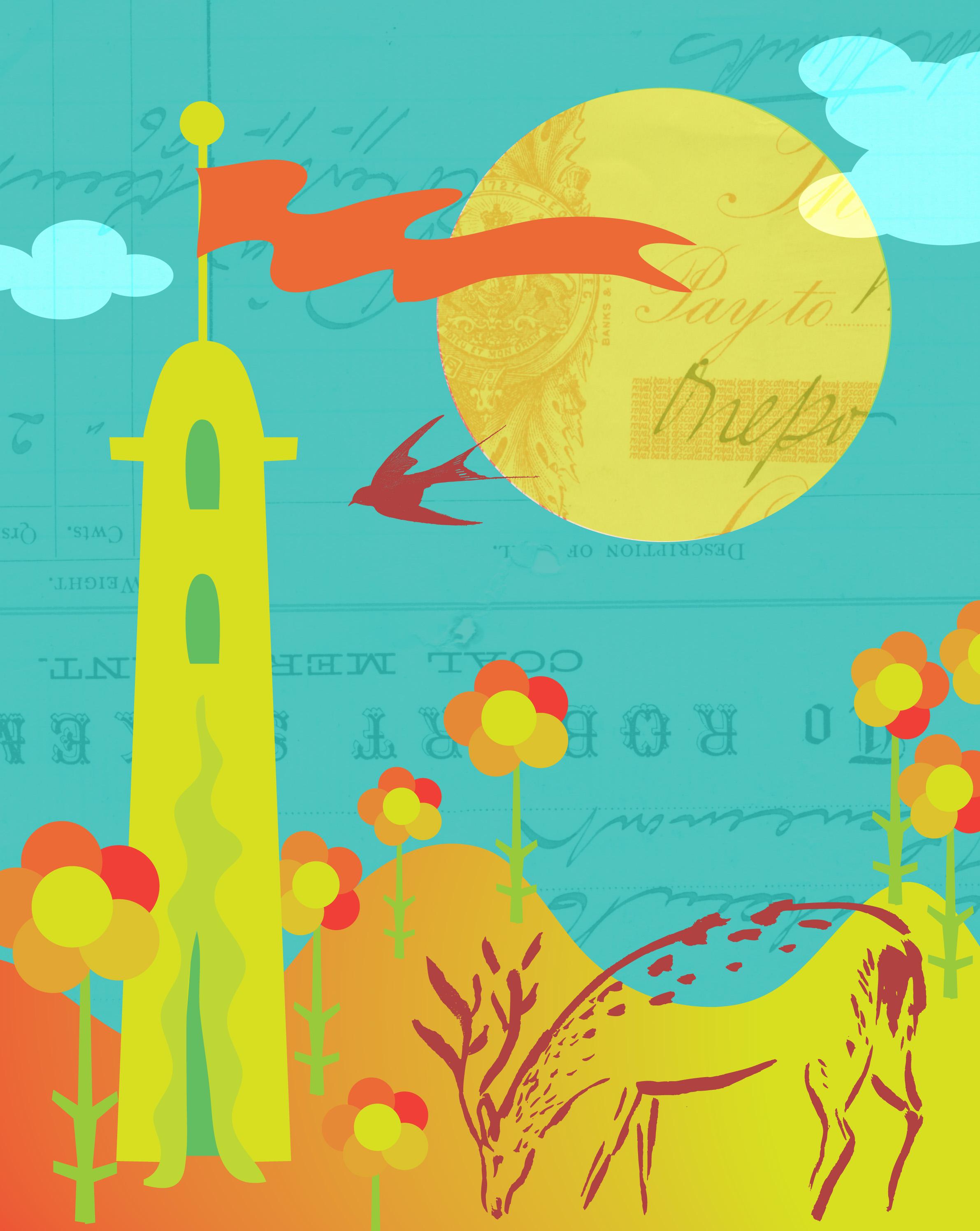 Although this image isn't directly related to the  final pieces - the experimenting and playing has given me some ideas of ways to add some elements to the final pieces that aren't part of my usual way of working. The next thing I'm going to do is draw up my artwork and start colouring in Illustrator and also think about where and what type of texture I want to use.