The Ghost of Sumi

I recalled you saying it's possible to kind of get two prints out of one tray and thought it'd be interesting to make one print, then do a few more rings and make another. Turned out kind of neat (looks better in person), if you look outside of the rather plain circles you'll see wispy pattern of ink, "The Ghost of Sumi". Definitely going to play with that concept more, will post if I have better results.

1st - prior to creating "The Ghost of Sumi"

3rd- instead of dabbing the dish soap brush in the center, I used it to push the ink (alternating right/left) as you can see on the innermost lines/circles. One thing I noticed after three prints, my outer circles/lines tend to be much darker and more crisp than the inner circles/lines, creating a blurred look that I'm not fond of... I'm guessing the ink is moving as I lay the paper, but not positive. Any idea as to why this might happen or how to prevent the blurry/faded rings?

I've made a dozen prints since posting my first effort, got some really cool looks but they all turned out like the first set- sharp, defined lines on the outside that got progressively blurry toward the center. Determined to get the hang of this technique, I hit my local United Arts & Education store for a dedicated marbling tray (had been using the lid from a deli platter) and got to work. Two things I changed this time were the water- used purified drinking water rather than bottled, and I diluted my dish soap. As you can see, I got much better results. I tend to think the water helped the most, but I'll have to test that theory another time.

I also played with multiple points as you can see in the first image (believe I had three here).

Remnants of the print above... turned out really cool, kind of a zebra pattern meets Grateful Dead-stylization.

A bit more "marbled" this round. Also picked up some colored dyes recently. Still working on consistency, but feel like I'm gaining more control with each attempt.

The next two were side-by-side prints in the same tray, happy with the way they turned out, but placing the first piece of paper moved some of the ink so they don't align quite right. 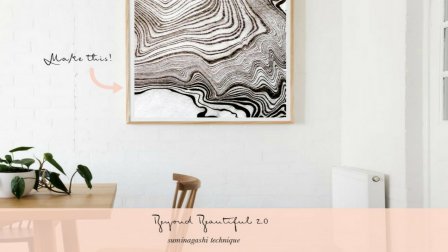