The Breeders - Last Splash in its entirety, LIVE in Detroit Gigposter

I'm an office worker in Ann Arbor, MI.  I'm psyched that The Breeders are playing their influential album "Last Splash" in its entirety in Detroit, so I chose that.

For my sketches, I tried to go three different ways, but still blend rock gigposter aesthetic with the band's identity and my own personal asthetics.  I have a degree in sequential art (aka comic books), so that will be my own pinch of flavor going forward.

The first one on the top left is a traditional cheesecake, pinup, "ooh, lookey it's a hot lady" one.  The heart on the cover of the album always looked like a strawberry to me, so that's why the strawberry is there, but if I go with this one, I may swap it out for the heart with black things on it.  I threw in the snake though because of the big fruit to give it a "fall of man" feel (last splash...maybe too punny?).

In the second (top right), I tried to capture that awesome 90s feeling of jaded idealism in youth.  I feel like it's appropriate today with the economy and current events being what they are.  The girl is holding an enflamed dollar bill in front of a picket fence (symbol of ideals and stability) as the city burns behind.  Did she set this fire?  I like to think so.  Worked the band's name into the bushes to make it feel more cohesive.

In the third one, I thought of their lyric from their hit single from this album "Want you coocoo cannonball."  So I thought of a cuckoo clock.  Hitting on some more of that jaded anger though, I had to make the cuckoo bird angry.  The band's name is a framed cross-stitch, echoing back to that feeling of stability and ideals (perhaps too stereotypically, but I'd hope it would resonate).

Looking forward to seeing what everyone has and what they have to teach me! 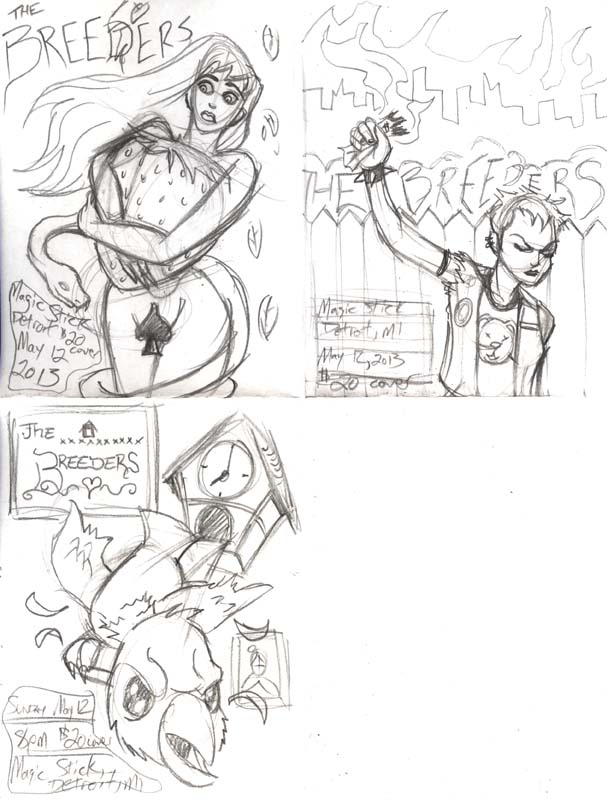