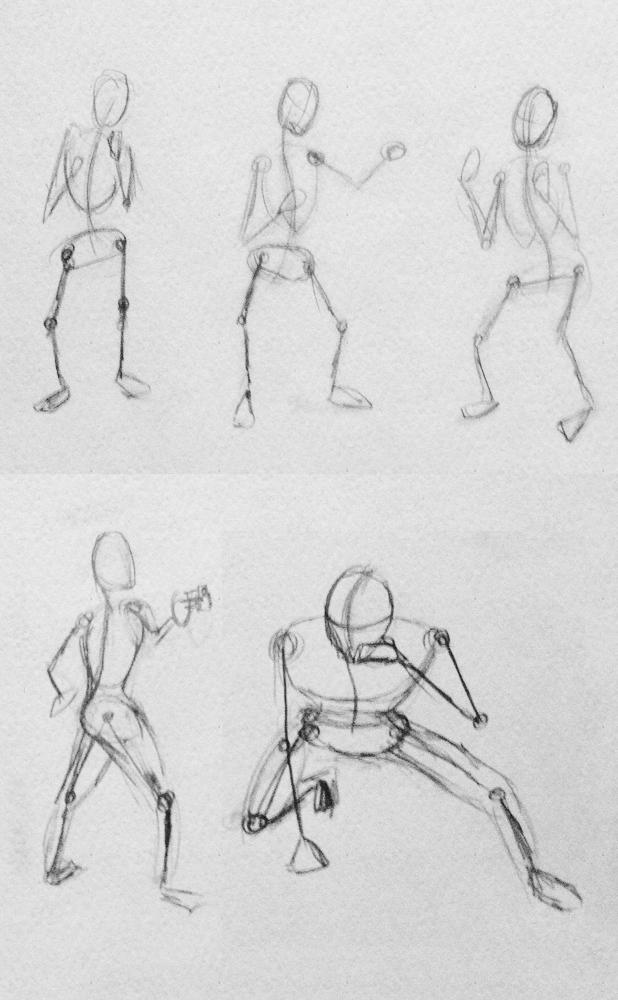 These are my thumbnail sketches so far. It has taken me a long time to finally come up with a concept...but I am thinking of going with a female boxer or a female agent type character. Tried to do a variety of poses, some more dynamic than others.

For the standing poses, I think I will need to bring her fists closer to the face. The bottom left image is based more on the officer/agent engaging in combat. The bottom right pose shows the character rising up from the ground after taking a big hit.

I developed one of the standing poses only slightly more (slightly larger), for a better idea. See below: 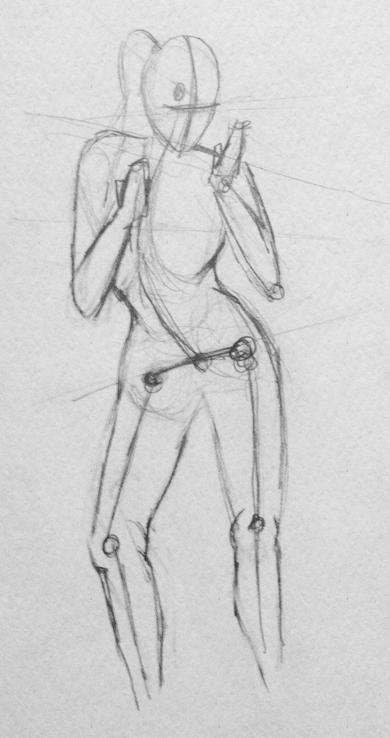 Used black ink to tighten up the outlines and features of the character. Used grey markers to suggest shading and light sources. I decided to stick with the standing pose, but I got the boxing gloves closer to her face in this revision. And I positioned her body a bit differently so that her face is more dramatic and engaging with the viewer. I think im also going to go with a 3/4 body instead of the full body to make her face more promitent in the canvas...Thoughts on that? Should I crop at her thigh versus below the knees?

I'm also debating a hand wrap versus gloves to make her look like more of a street fighter than an a boxer in the ring. As for the environment, I am planning to have a graffiti or cracked concrete wall behind her (like shes in an old warehouse gym). 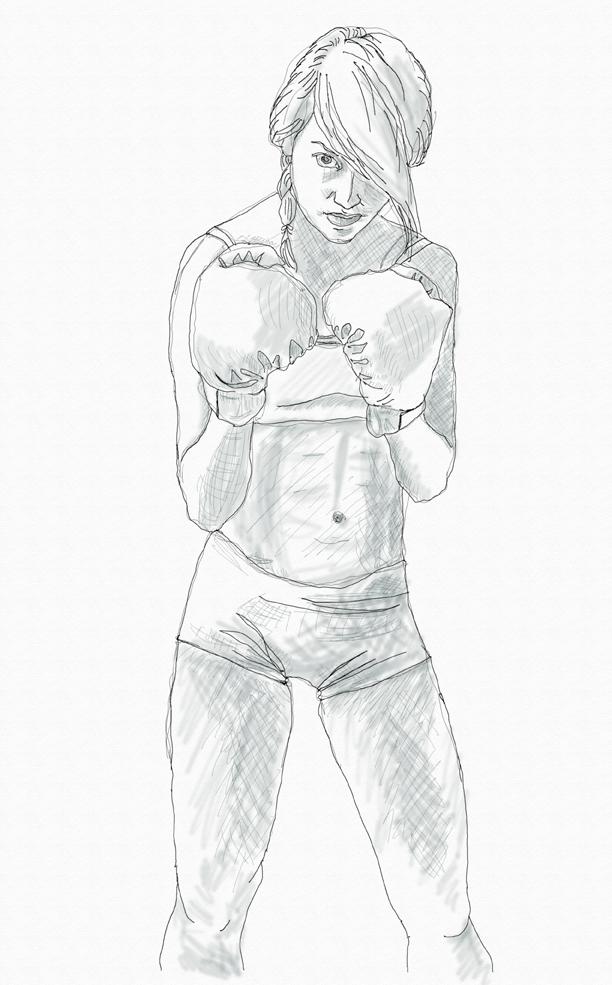 This is the inked drawing. I replaced her gloves with handwraps to add a little more detail to the main focus area of the image. I might go back into the ink lines to thin-out and thicken some areas.

For this step, I used the Blob brush and pressure sensitivity with my Wacom Intuos tablet.

I've used some contour lines that extend inside the shapes (such as on the knees, arms, and shorts) but haven't decided if I would add some more lines in her upper arms to "bulk" her up. I don't want to over-do those lines that suggest muscles. Should I use these lines for her abdomen too? Or will shading be enough?

I've painted in the inked version with areas of flat color. The swatches used are shown off to the side. I am *hoping* that some shading and highlights will bring it to life ... 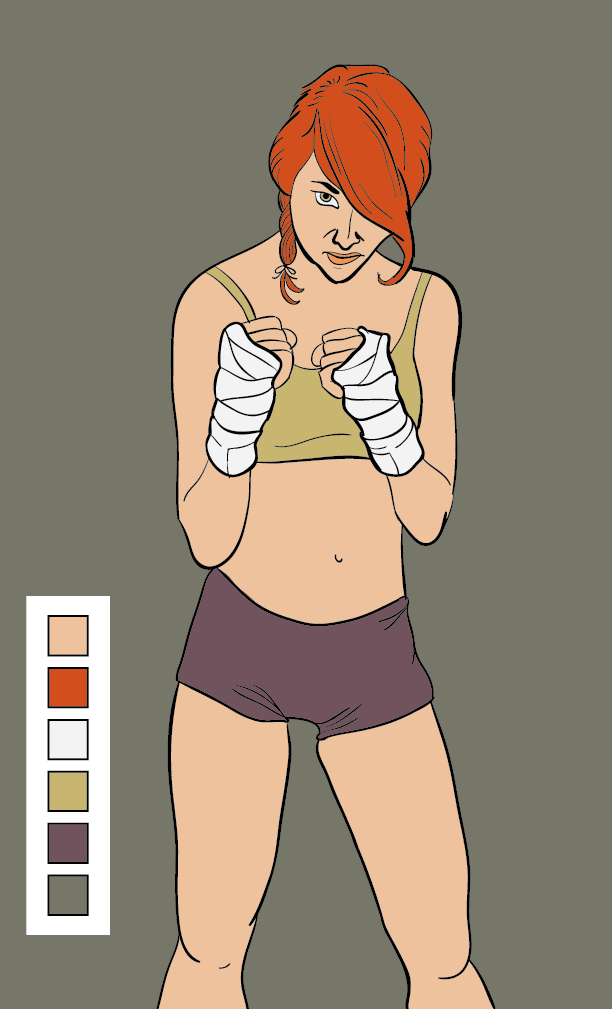 5) CLEANED UP Flat-color on Inked Drawing:I just went in and cleared up some stray marks, and removed the background color for now...Still undecided on the background and environment. Next step is to shade and highight her...struggling with that part at the moment....

I am just using the blob brush again for shading, and I think that is working so far (at least for the hair, I may have to use the pen tool to make more precise shadows for other areas). Now, I am debating between flat colors for shading or using gradients for the shading...

As for the background, I think I want to introduce a little perspective, so I am planning to have some crates behind her (like the inside of a warehouse) The crates will be very linear, creating a little pattern, but hopefully not distracting from the character. 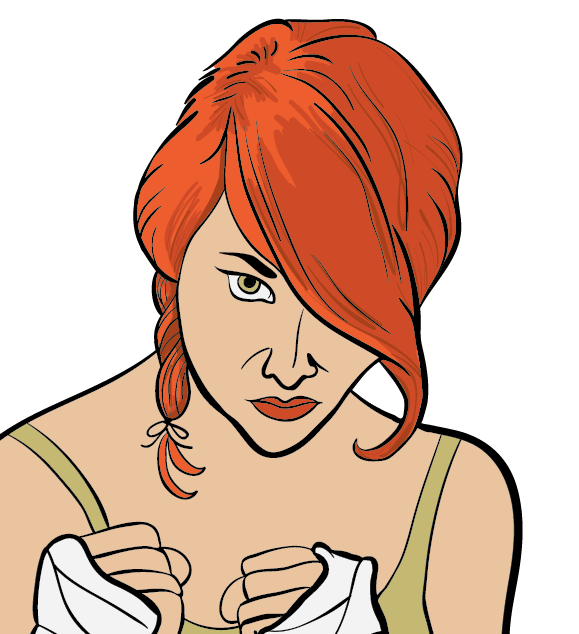 I redrew the fingers. Hopefully they're looking a little better.I also fixed some of the lines around the jaw and face. I think this definitely improved it. Thanks for the suggestions!

This is my progress so far with shading...still a long way to go with it. This is by far the most time-consuming and difficult part of the illustration! But I can see it starting to come together, which is pretty cool. 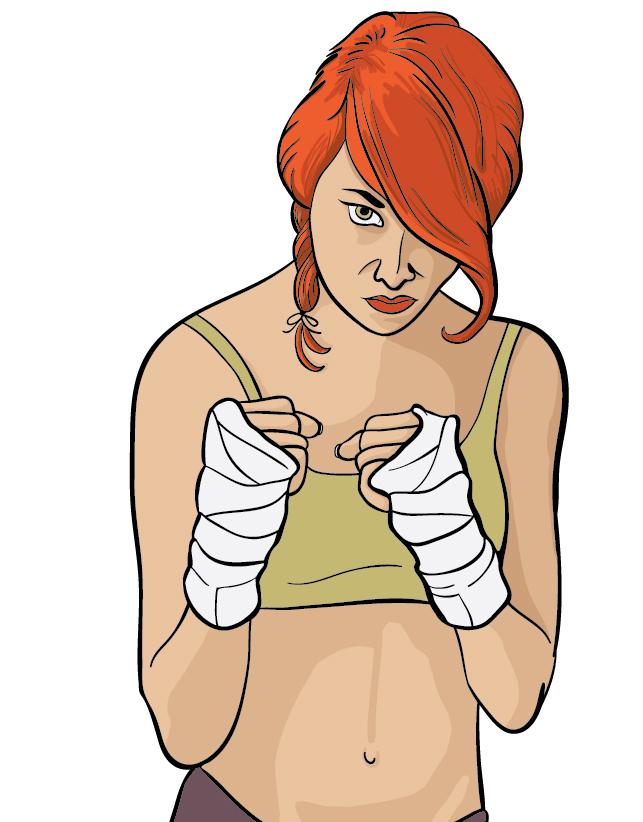 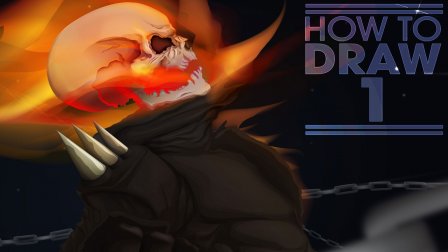