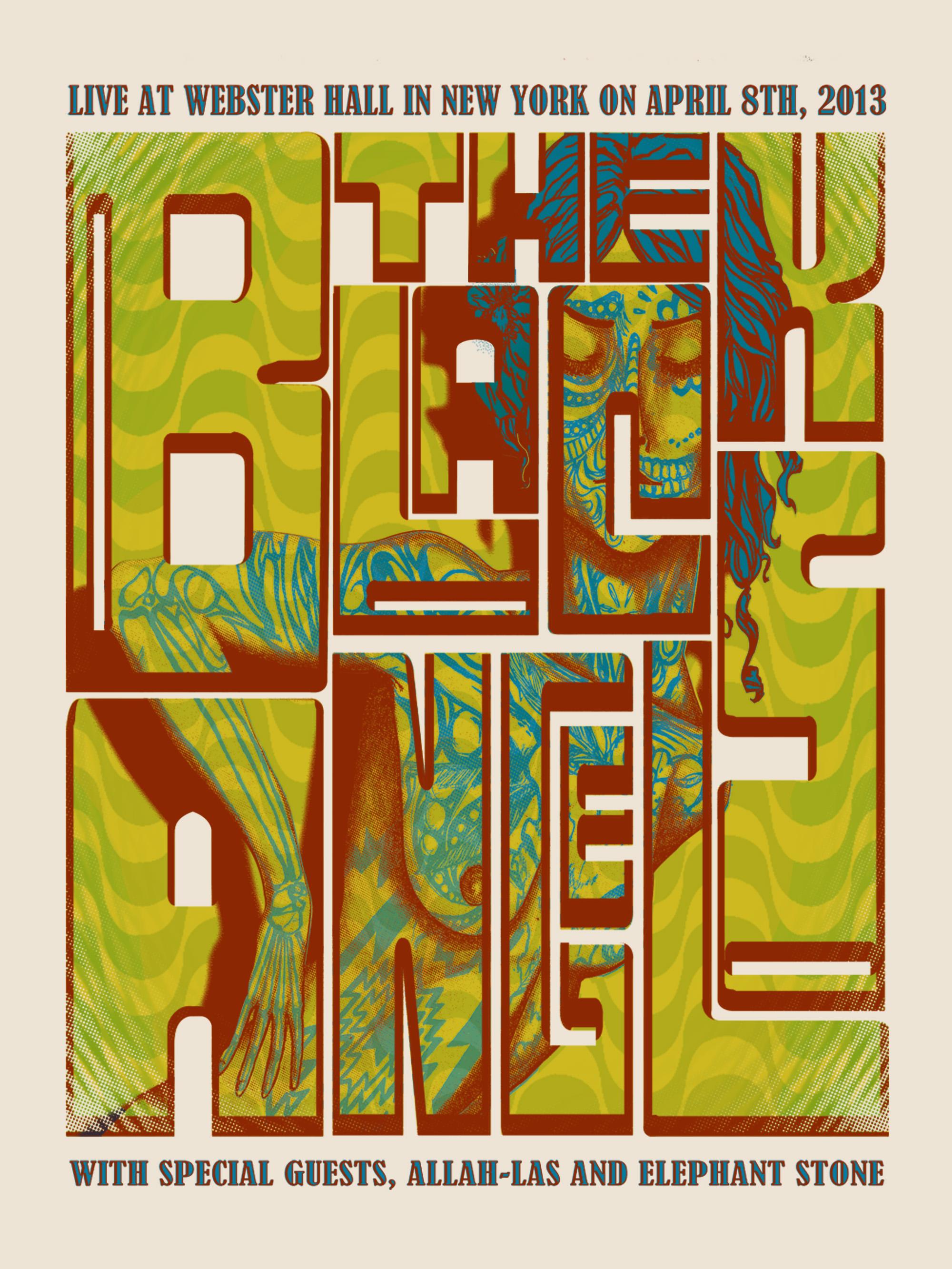 Plates are broken down! 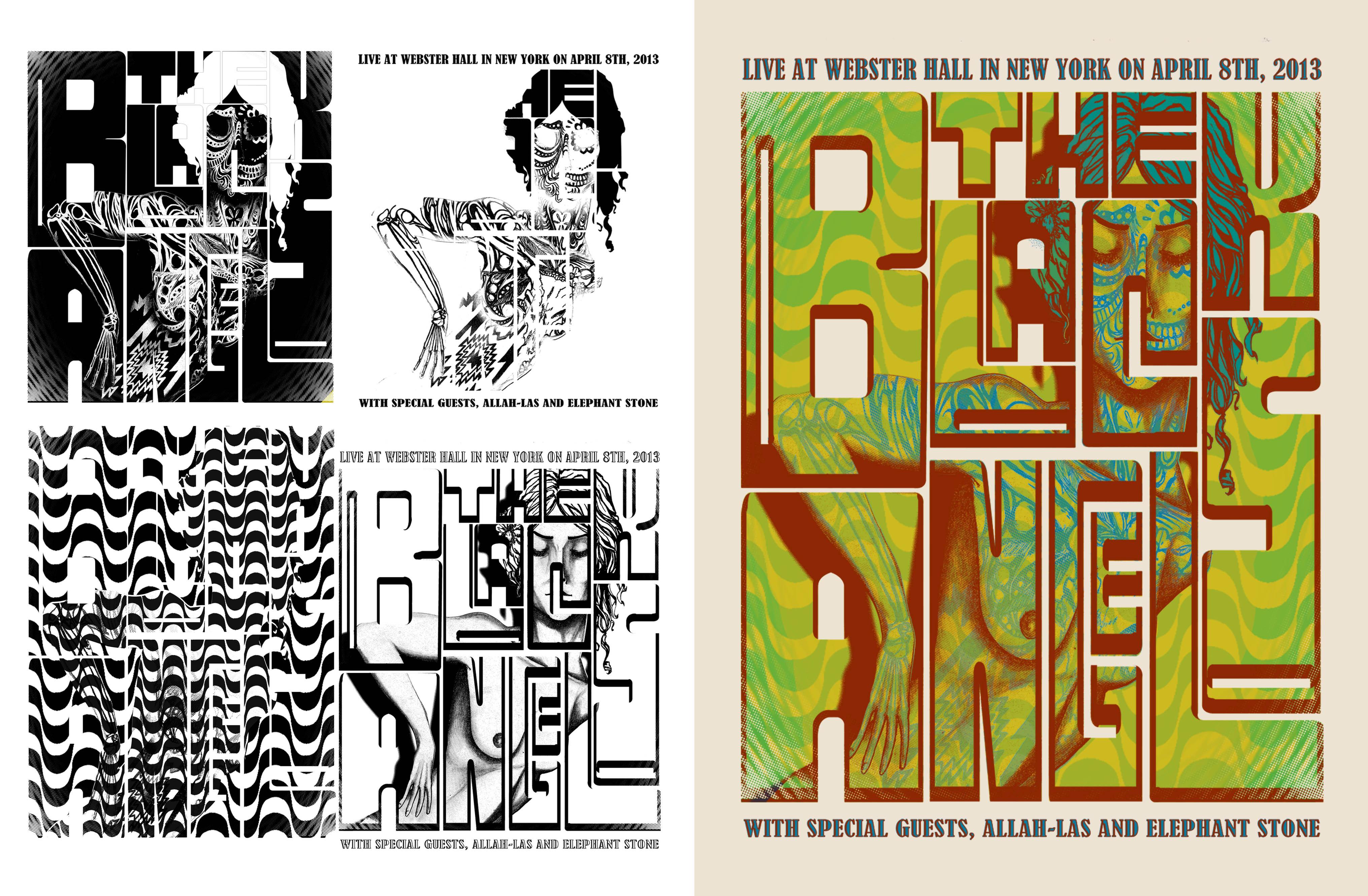 I was hoping to update this project more, but didn't have the time to go in depth with my process.  So, I added a few pictures used throughout the process below and left them totally out of context.  I wanted a poster reminiscent of the Fillmore East posters in the 70's, but my poster to have it's own unique feel.  I really wanted to stay true to my original concept, which was really difficult to do at times.  Still, I love how this came out and am very happy with it!  I settled on a color scheme after spending two nights changing colors consistently, and still don't feel entirely satisfied; there were so many that worked, but I always seemed to find something better.

The poster would be a 4 color print, and outside of some minor cleanup work around the lettering, this image is print ready.  I didn't want to rely heavily on textures or layering for this design, I wanted stark color and subtle mixes.  At some point, I played with lighting and angles, but in the end felt it complicated the image so I threw the work out.  I'm happy with the planes created by her shadow, and feel this was a simple solution to create depth and still hold the constraints I created while concepting the image.

I'm sure I could go on for a while with process information/explanation, but hope the image holds its own without all of that.  Every piece of this poster was hand drawn first, and the trapping is set to show minor misregistration (very minor) because I wanted an overtly obvious screen-printed feel.  I had the image cut down to 3 colors (which I really liked) but felt the design became overly stylized and didn't fit into the psychedelic arena I wanted.  Still, it was a valuable lesson; over designing and chipping away is a great way to work if you have the time!  Here are some of the process pics: 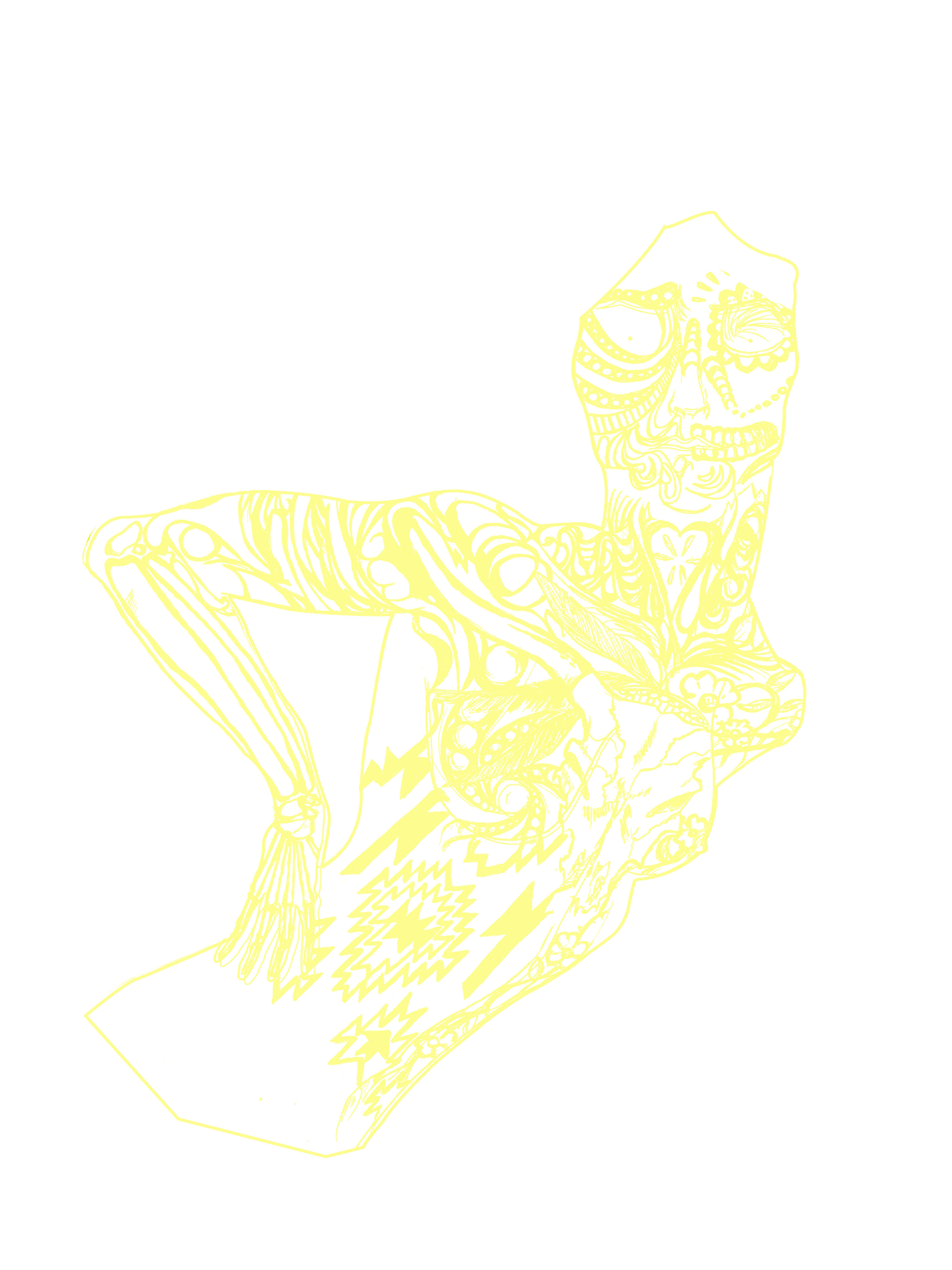 After inking, rendering and registering the first layer of body paint, I printed that layer to add a 2nd color paint layer.  However, this muddled the design too much and I ended up throwing out the second layer. 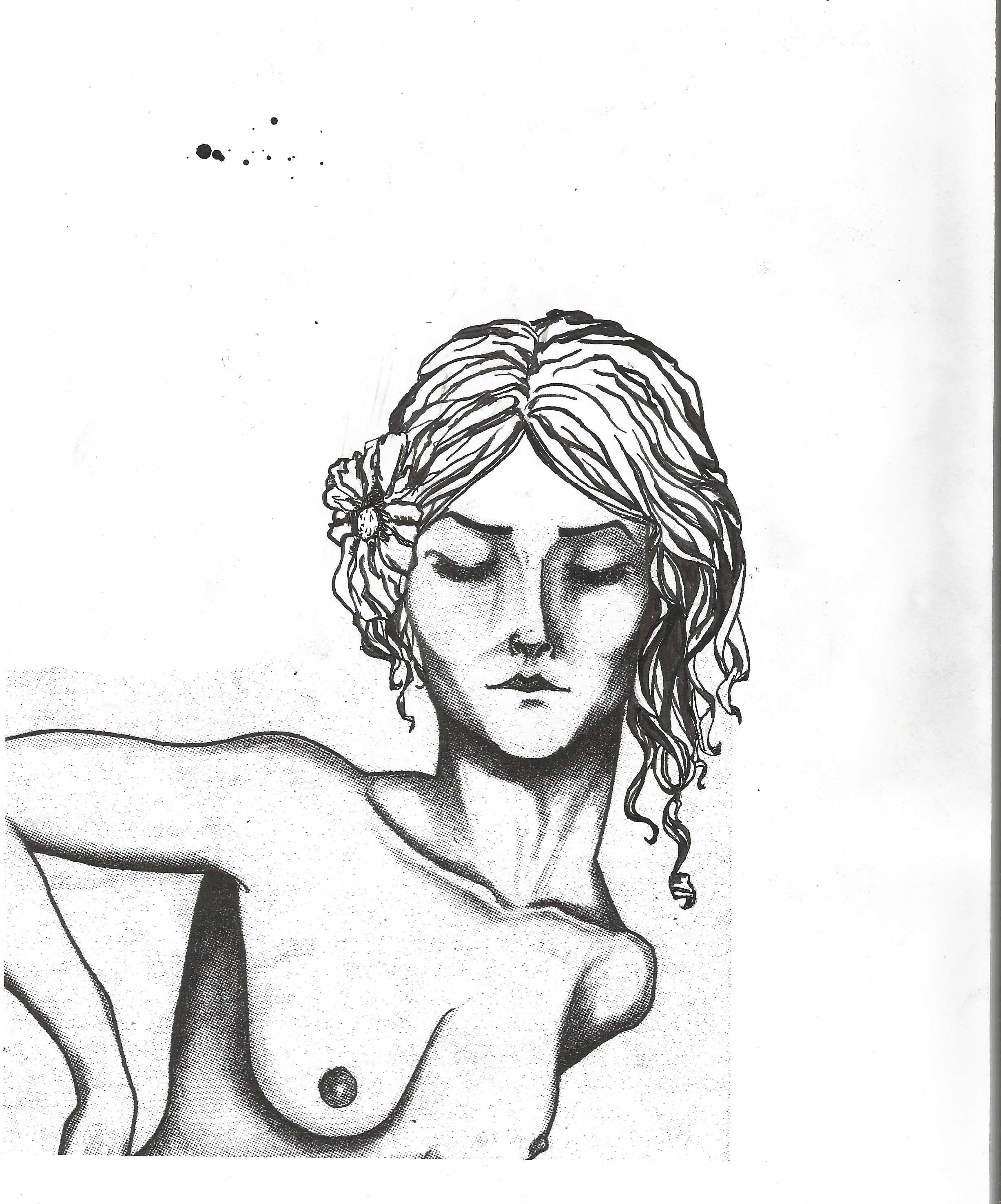 I ended up drawing 7 different styles of hair, and found my match in this one, I'll be happy to upload the others once I find them and scan them. 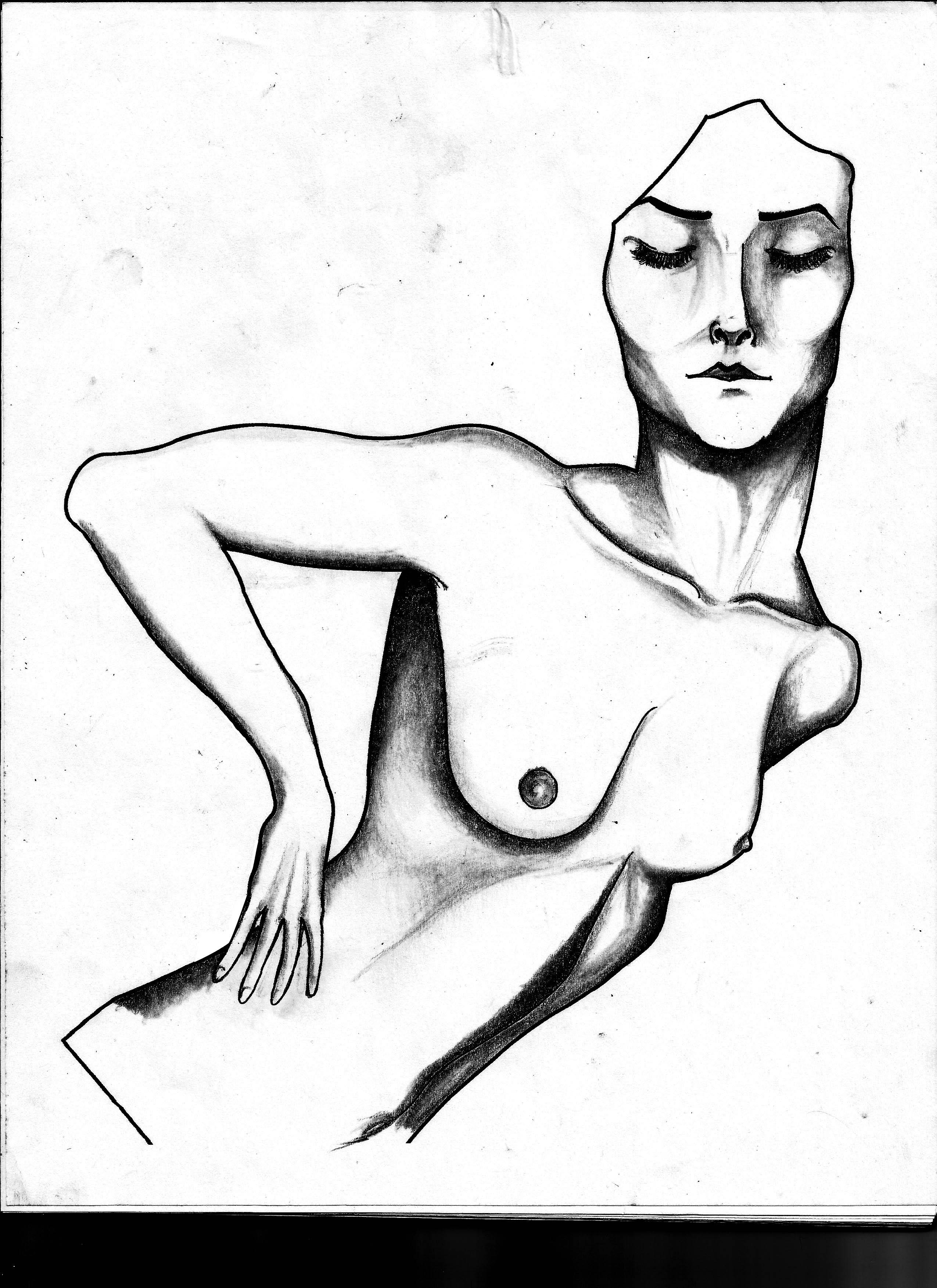 Progress on Shading the woman prior to finding a hairstyle.

I'm still tweeking the final colors, textures, and venue information, but the design is mostly completed.  I thought I would give an update just before it's finished.  There were a lot of pieces I needed to create for this final image (and haven't included in my project space) but I'm very happy with the progress! 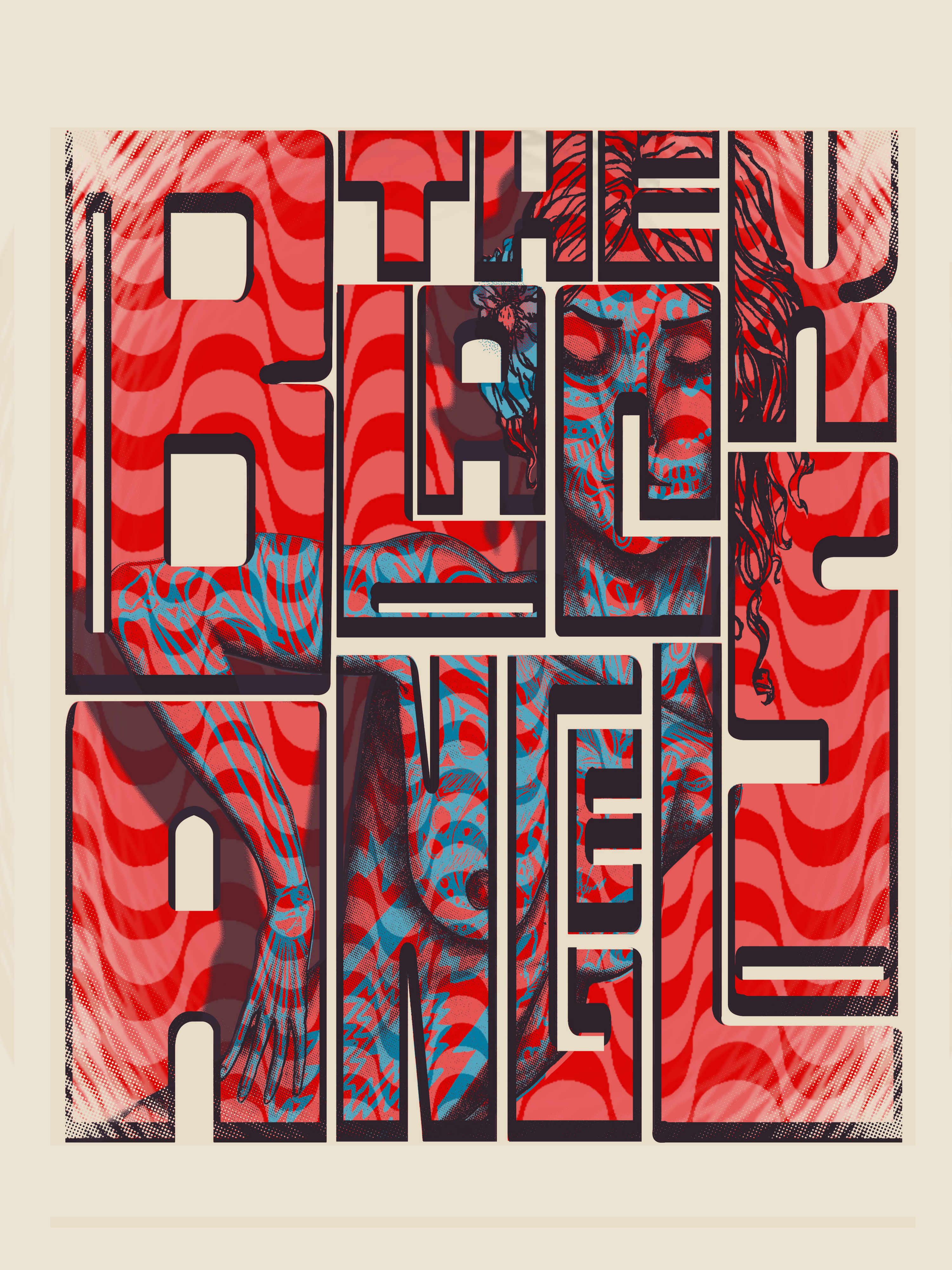 Over the last few weeks (since I've enrolled in the class) I've thought up a few concepts which I felt were perfect for the Black Angels.  I had been listening to the music here and there, and for whatever reason I was really excited about these ideas!  I debated on whether I should find a new event and illustrate for that (a band I'm not so familiar with) or if I should get these concepts down while they were fresh and hopefully receive some constructive criticism.

So (for now) the Black Angels it is!

They're a psych-rock band out of Austin Texas and part founders/presenter of the Austin City Psych fest.  They have a range of music carrying various themes, and it's the b-side tracklist and smaller projects they've worked on that inspired some of my sketch concepts.  I always really appreciated their site presentation and album covers as a sort of 'dark side of psychedelic' music and style.  I've had the opportunity to do a few posters over the last few years while learning how to design digitally and print.  I put a lot into my designs, but my tools have always been limited and therefore I feel my designs/concepts suffer.  For this project, it's my intention to go all out as far as illustration and 'effect.'  I'm hoping to hit particular tones with each concept, so here they are:

*Note, I scanned these at work so the thicker lines were incredibly rushed and the work isn't presented as strongly (in my opinion), luckily they are prelim sketches.*

Sketch 1:  It occurs to me that this illustration/concept is relatively obvious, but I really like the bones of the piece.  There's a huge divide between raves and psych music, and glow in the dark body art is often associated with raves.  However, for this piece, I'm hoping to turn that association around and give it a more psychedelic tone through color, imagery and pattern.  The lettering (which needs a lot of fine tuning, but hey, quick sketch) will be the darkest color causing the body art and color to outline the silhouette of the woman. 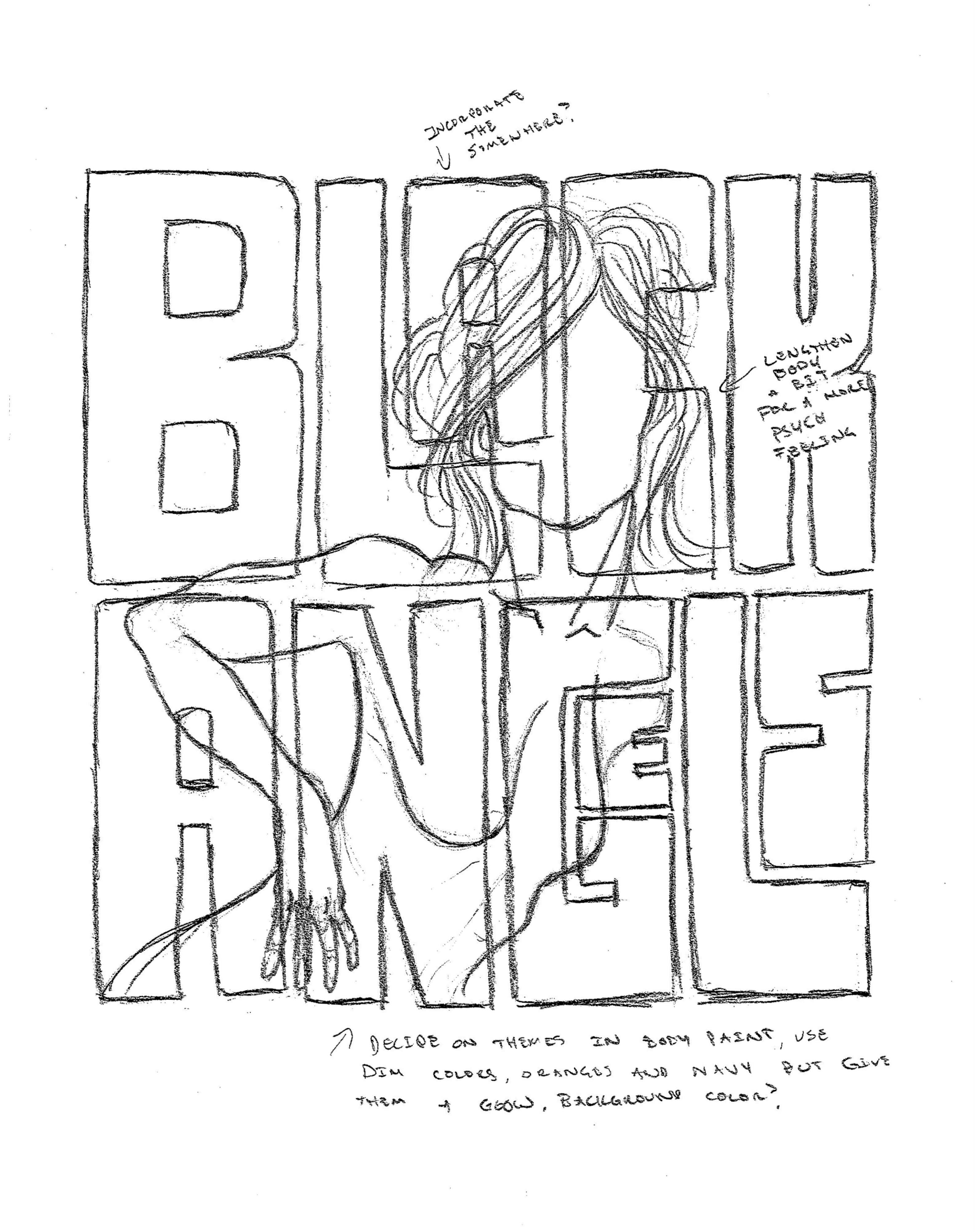 Sketch 2:  For my second concept, I'm hoping to incorporate wavelengths patterns based on various waves into the design, as well as fix the perspective of the piece.  This is an initial sketch, but I'm wondering if the angle should be changed; would an overhead view be better?  Would it change the nature of the design to be more slick and straight-lined?  If so, will these wave lengths work at that angle?  There is a lot to consider with this, but I feel the imagery is strong.  Again, a little obvious with a snow angel on a black tar roof creating a 'black angel,' but with the right tweaking and perspective, the piece could really work.  It sets a really strong tone and relates well with the music.  We'll see what can happen with this. 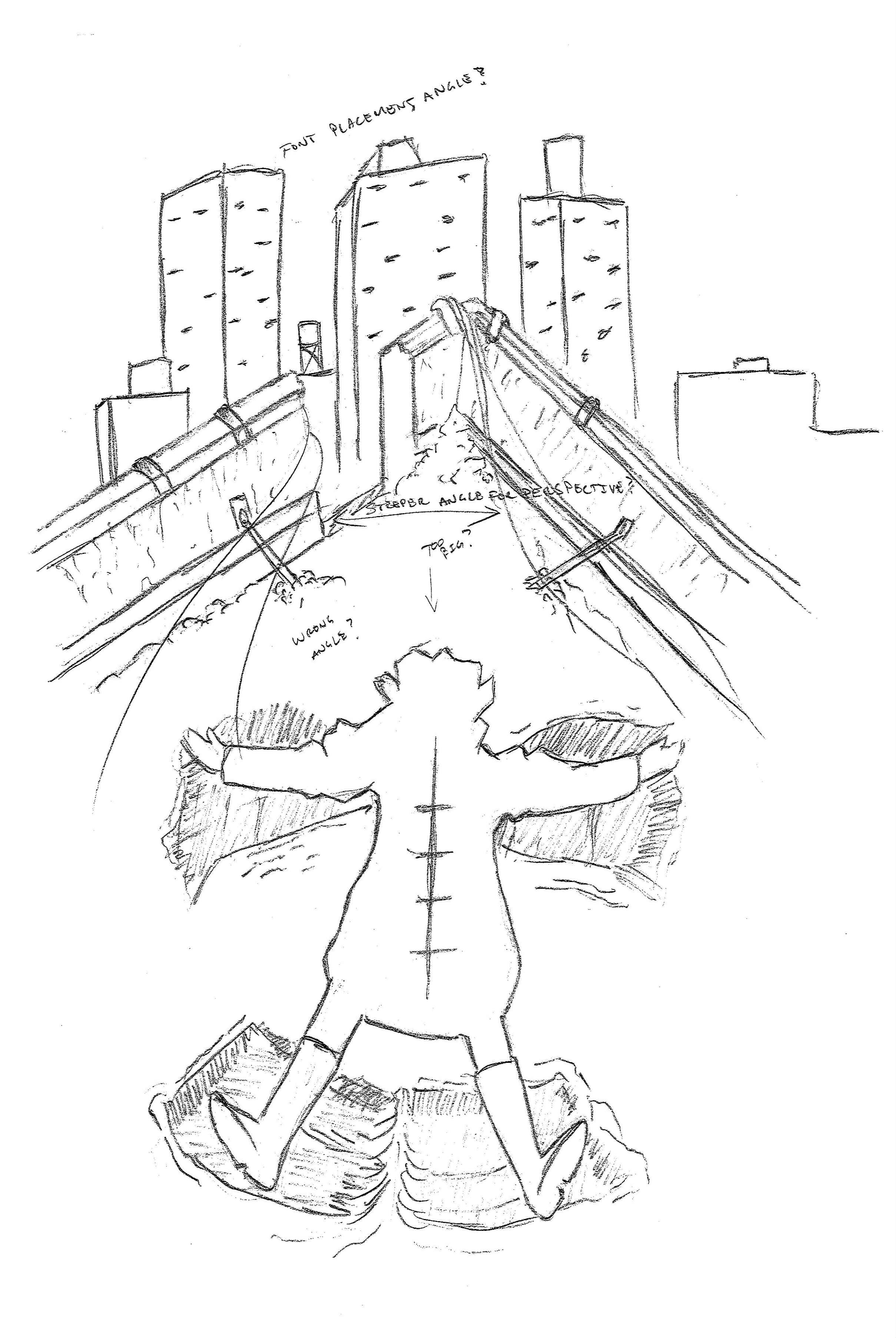 Sketch 3:  Lastly, this design caters specifically to an EP exclusive track called Boat Song.  It fits the theme of other songs in their catalog (Manipulation, Black Grease, etc) but it is the tone of this EP track that I wanted to set.  I plan to reframe the image with the crosshair so the character's outcome is ambiguous.  I feel like (if done right) this image can really tell a story, and in my mind, the tone of that story really fits the song.  Again, this is another quick sketch, so the scope of the image, as well as the outward design will be much more stylized (as noted on the sketch). 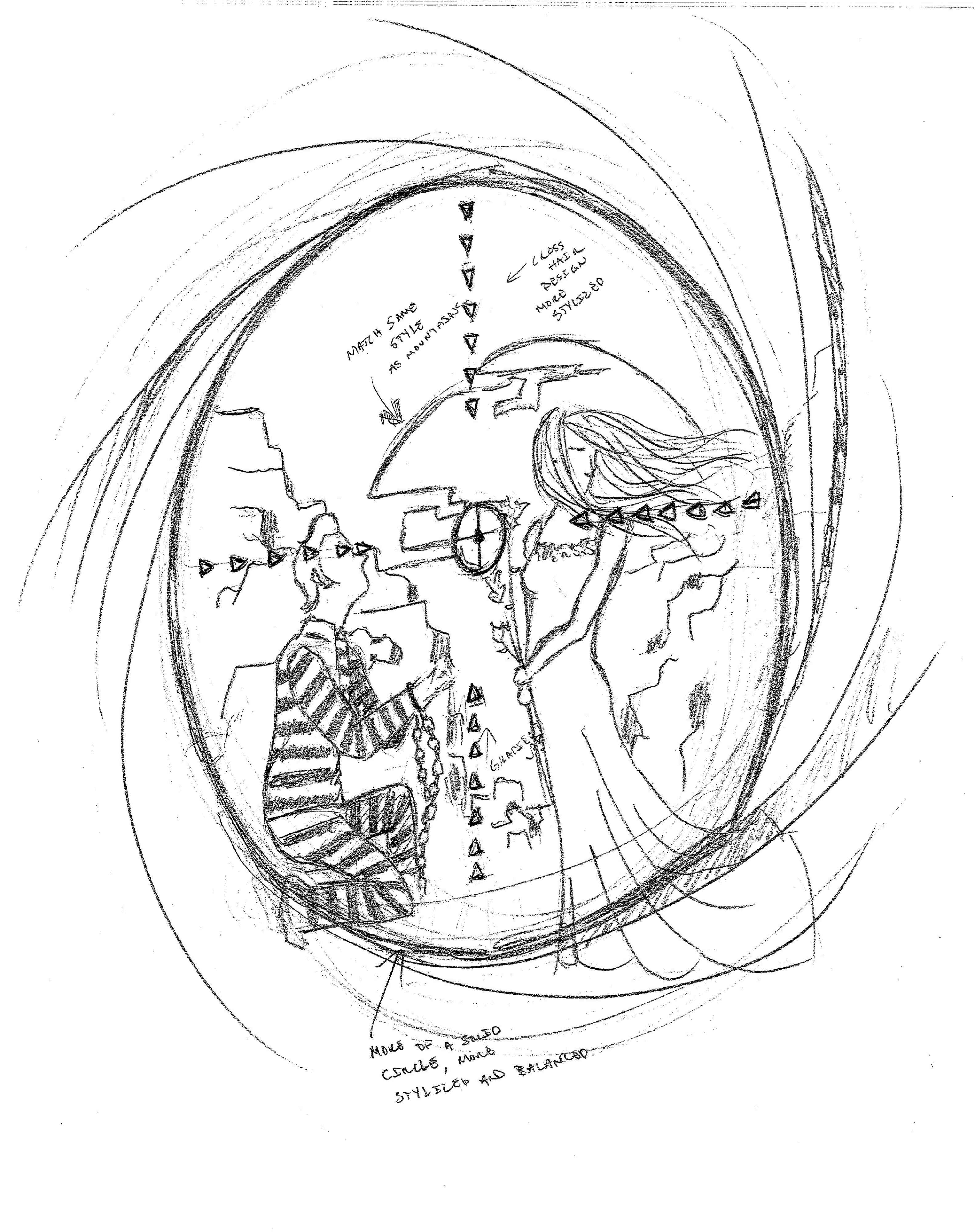 These are the prelim sketches to-date, and I'll be doing some more research to see if I can/need to drive these concepts in another direction.  Or, scrap the whole project, and really challenge myself with a band I'm not familiar with (which I'm tempted to do, but with a 9 to 5 it's hard to find the time in a day or two).  Any and all criticism is welcome and much appreciated!

Updates have been a little slow going, but the work is really coming along!  After playing with concept 1 some more (sketching my font layout, and continuously reworking the woman's pose) I've got some digital progress to report.

Here is the 'detailed sketch' of the font I would use to create the final background layer, this was more for reference: 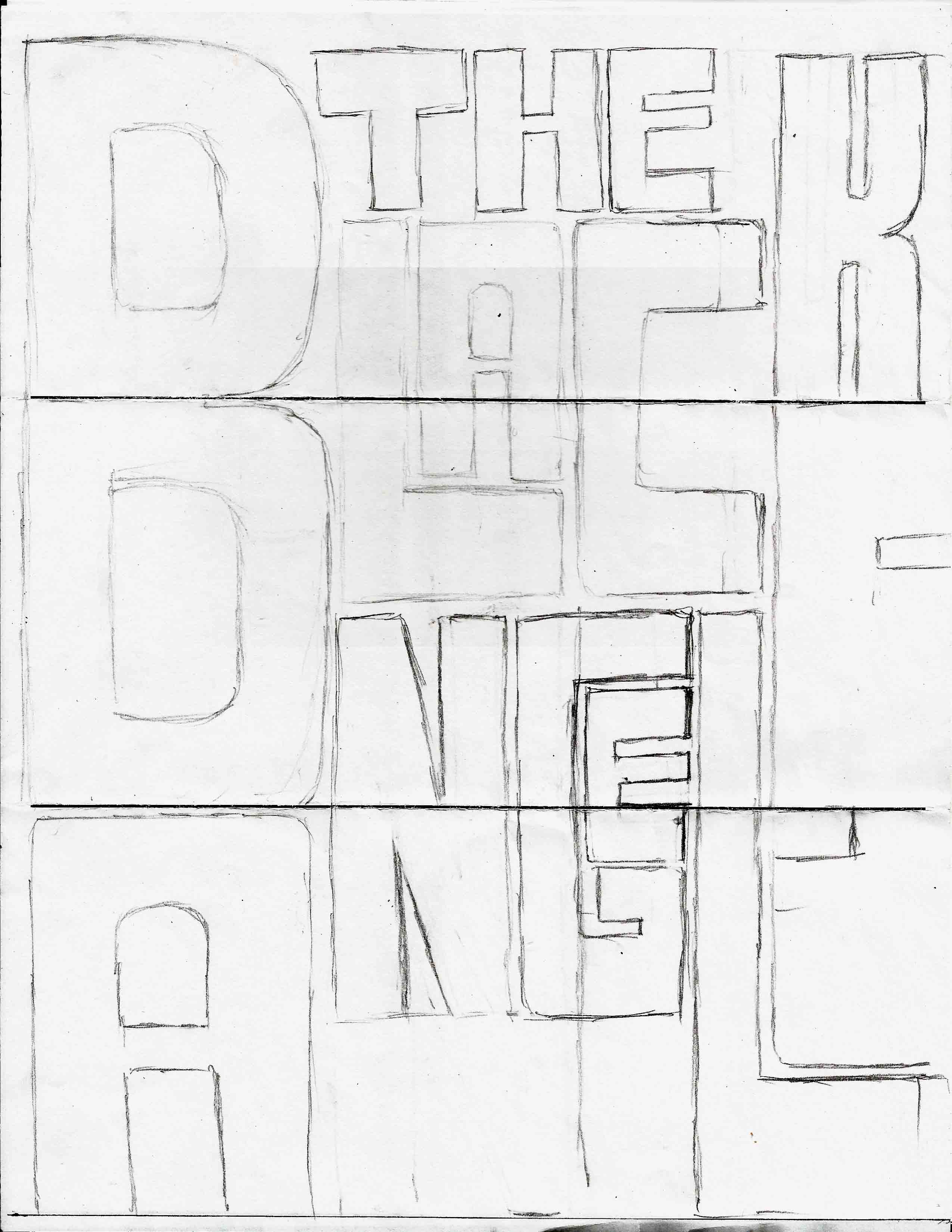 And here it is a more completed image, without venue information: 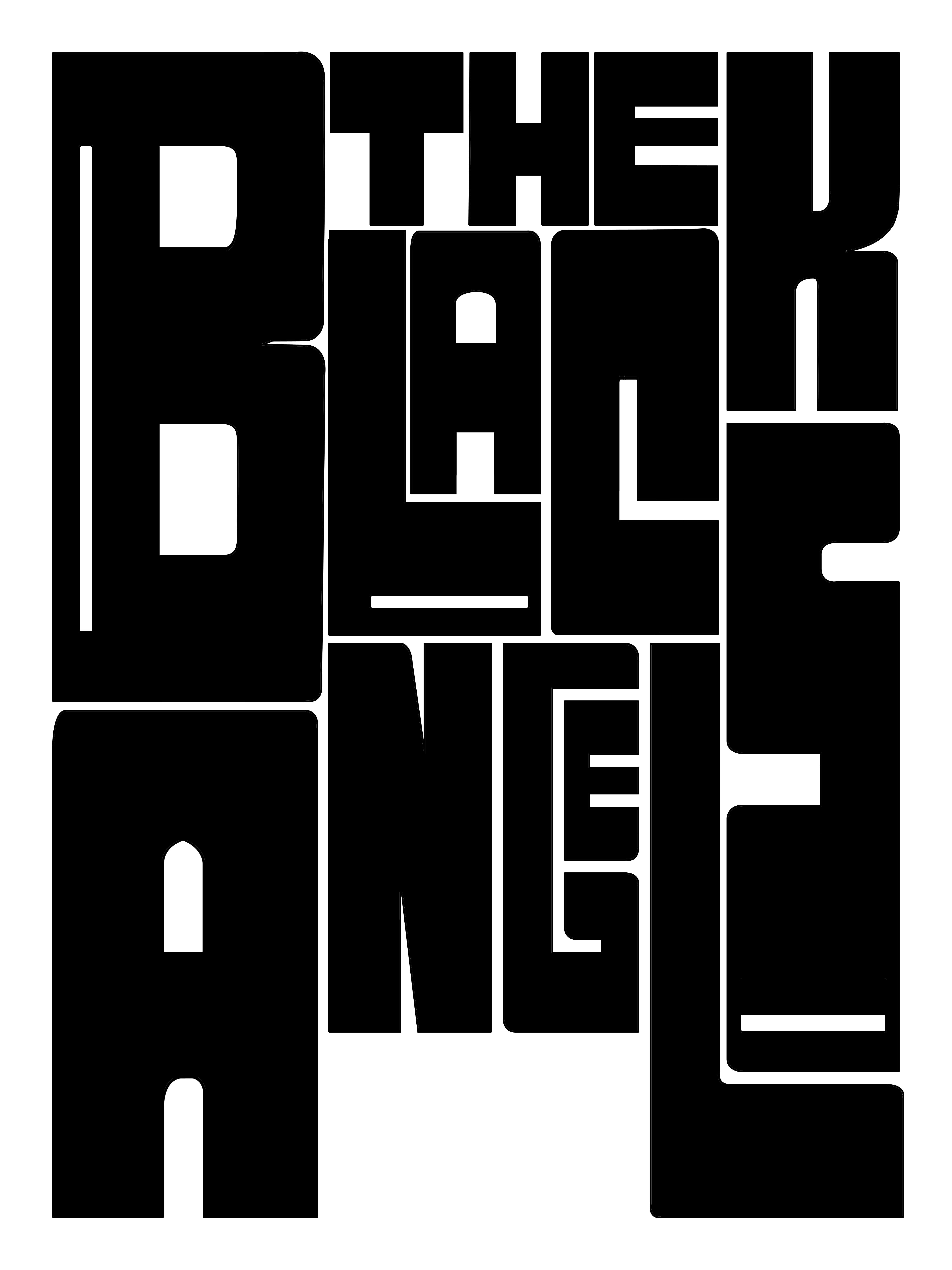 Finally, here is the reworked image of the woman.  I have a solid idea with how this image will be treated, but here is the initial sketch for this color layer, a basic piece of the puzzle. 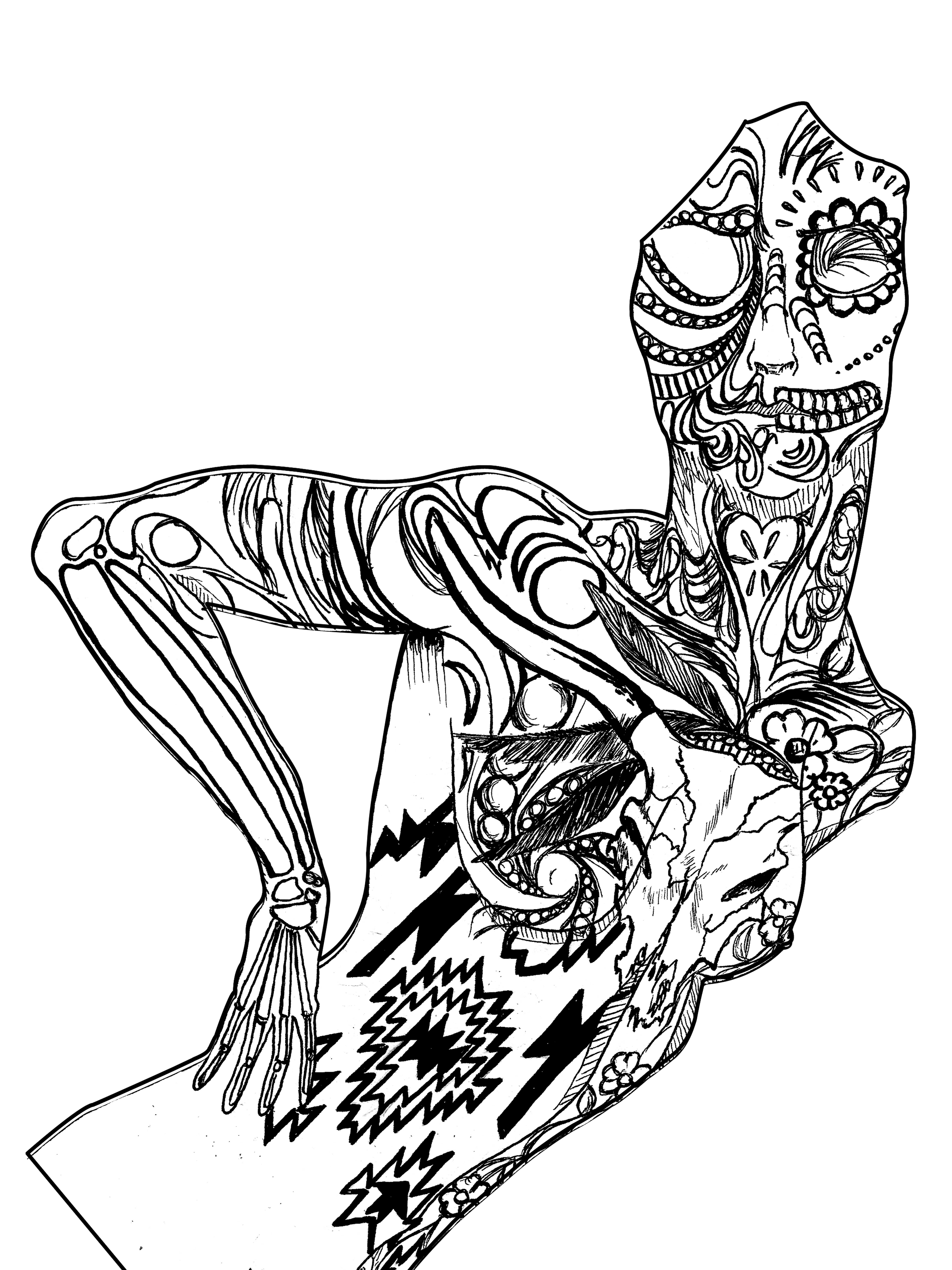