The 3 Portraits that inspire me

My names Denys Twiss I've been a hobby photographer for the last 4 years and I have met some great people through it who I shoot with when I can, the majority of my work over the last 3 years has been Cosplay (costume play) portraits where the model is dressed as a character from a tv show, video game or animation. over the last year, I've been trying to get more into fashion and street portraiture.

and my portfolio which is a still work in progress https://dtwissphotos.myportfolio.com/ any feedback is greatly appreciated thank you for your time.

The above image is an image I took while at an event, the image wasn't planned we were waiting on a mutual friend to arrive to do a shoot together. The reason I'm inspired by this photo is for a few reasons, the first being the focus being solely on the model with the background being out of focus, I also find that the colour contrast in the model's attire is good as red and blue work well in contrast to each other I also like the way the photo is framed with the model slightly left of centre with her feet pointed out the bottom left corner of the frame.

The above photo is again 1 of my photos that inspire the contrast in this photo between the black and white and how the image fades to black at the bottom of the photo as well as the point that the model is turned away head down with the one finger up when I took this photo I was trying to give the impression of goodbye of a friend.

This last photo is one of Peter Mckinion's this photo inspires me as I love the colour tones and framing and just overall the simplicity of the photo but outside of that it just goes to show that even with the most simplistic of an idea that a great photo can be produced and that someone like Peter who is well respected around the world for his photography and videography is the same as any one of us he's just another guy doing what he loves. 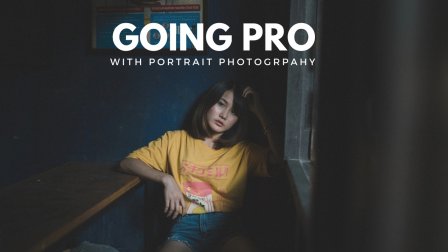 Going Pro with Portrait Photography: How to Turn Your Photography Hobby into a Job
Sean Dalton