Quick update here, as I've had a chance to really play around more with texture overlays since taking the class. I really love how much depth they can create in a piece, not to mention how fun and easy they are!

Here's a piece I made recently using overlays (inspired, of course, by Eric Carle's style, which I thought would be a fun way to practice and see how far the overlays can take you):

Overall, I used a combination of some inkier/wetter brushes in Procreate, as well as 4 texture overlays on various parts of the watermelon and treehopper. I absolutely LOVE having brushstroke texture in my work, but as a mainly digital artist these days, it's not the easiest for me to pull out the paints and do the whole scan/cut/paste/tweak thing in my illustrations. Texture overlays are a great way for me to gain some of that more painterly/messy texture, and the bonus is I can spend an afternoon making the overlays, then use them a million times in various pieces. So handy!

Can't recommend this class enough, so I'll leave up my initial post below as well in case it's helpful for others. Happy making!

I'm always a fan of Steph's classes, so when this one released I pretty much dropped everything to check it out. So glad I did! I use Procreate for most of my work, and am a big fan of the various blending modes to bring out some fun textures or depth. I've made my own texture 'stamp' type brushes and used those on various layers before, but it really never occurred to me to create some full sized texture overlays that I can move about on the page, within those different blending modes! Such a great idea -- and already a time saver!

This is a piece I made using two of Steph's samples -- there is a scribbly background overlay that I used (linear burn blending mode) over the blue background, as well as a grungy overlay that I used over the entire piece. That last overlay doesn't add a *huge* difference*, but it was just enough to bring out some of the earlier depth I'd made with the shadows and whatnot. Just enough to help make the character pop from the background! I also used a sample of 'denim' that I yoinked from an online catalog, and applied that (once desaturated) to her pants. I probably could have pushed the opacity on that one a bit more, but it was fun to use these techniques with some other photos!

I will definitely be creating some texture overlays to add to the repertoire this week, and I love the idea of having a bank of them in Procreate that I can sift through for each project. Another 10/10 class -- thank you so much, Steph!

(PS For those of you who love Steph's classes here but don't subscribe to her email newsletter -- I highly recommend it! I've learned so much from Steph already, and she has a wonderful video library of tips and tricks that is growing each week!) 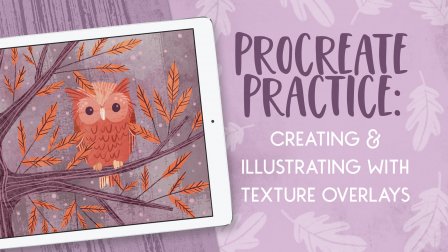