Reflections on the course. Although I’ll contribute this lines as a public comment to the course, I feel like leaving it here too. And first things first. The course has been nothing short of fantastic. The lessons are clear, well exposed and explained, well recorded and advancing at a comfortable pace. The exercises are significant and useful and there can be revisited once and again as a part of your warmup and also as a starting point for inspiration. The worksheets are quite clear and informative and a valuable resource for the future. Finally, the teacher, Bryn Chernoff, is passionate, engaging, knowledgeable and creative, which make for an awesome learning experience. Thank you very, very much!

Day #10 (last of the challenge). Habit breaking. As expected, today exercises were a lot of fun! I find the habit breaking idea quite interesting and alluring. It shows where you are in terms of flexibility and it also provides a wealth of possibilities worth exploring. I carried out today’s tasks with my Brause No 361 nib mounted on a straight pen holder. The nib is a favourite of mine but today, I’ve been struggling to tame it sometimes with disappointing results, even on the smoother Rhodia paper. On the pictures, my outcome for the proposed exercises and my sentence with some of the tools of the trade. By the way, despite the evident flaws and the inconsistency in my slant, I think there is some improvement on my calligraphy. If my sentence is a representative sample, not a small one, I’d say.

Day #9. Playing with style. Today, I carried out my warmup routine alternating two nibs, the Zebra G and the Brause Rose, both mounted on straight pen holders. The Zebra delivers less ink and hence both hairlines and downstrokes are lighter than those made with the Brause. In the end, I chose the G for the exercises for the sake of keeping the consistency. One problem with the straight pen holders is that I needed to keep my hand well below the baseline to avoid smudging the ink while writing (which happened whenever I forgot it and returned to my usual hook position.

With respect to the exercises, today’s batch was a lot of fun. Especially, the adjective interpretation. I selected the vintage (though it doesn’t look very vintage to me), the bold (as it came out with straight and quite simple ascenders and descenders, which I think were bold in themselves) and the rustic (which, in my case, could be renamed as runic because of its straight-line letterforms).

Day #8. Creative Break: Alphabet Collage. After my warmup routine (basic strokes + flourishing for a mere 45'), I tried this idea of a wheel with the uppercase alphabet in the shape of (the beginning of) a spiral and the lowercase alphabet following the inner part of the previous one and extending the spiral inwards. I added the numbers and the ampersand (in times, it was a part of the alphabet) because I felt like doing it. The rationale was increasing slightly the size of each letter but the outcome is not really consistent on that chapter. Also, my slant is faulty but I'm improving. Just compare the first rendition of my chosen sentence to this one!

The nib today was the good old Brause No 361. Again, it didn't fit exactly on my oblique pen holder. It was a bit loose, meaning that the nib orientation changed from time to time according to the direction of the pressure that I applied while writing. Once again, I used a tiny paper wedge. Not very orthodox, I'd say but it worked. By the way, I write on a slanted (45°) table. Hence, the nib is almost all the time pointing a bit upwards and I experienced some problems with the ink (blots and reservoir not delivering the ink evenly to name just two).

Day #7. Flourishing. It's been fun although the outcome didn't meet my expectations in the end. Not that I couldn't do it better even though I haven't a lot of practice with flourishing but, well, I guess there are days and days after all. I always warm up with the exercises proposed in the first worksheet and then, I move on to the ones for the current day. What I've noticed is that, when I start I drive my pen with my forearm but, as I get increasingly tired, I tend to move my fingers instead of my forearm. And there is where things start getting wrong and consistency drops quickly. Anyway, one week and counting.

P.S. The nib is the Zebra G. It doesn't fit really well on my Speedball left-handed oblique pen holder so I needed to add a tiny paper wedge to prevent it from moving. From time to time, I needed to set it back into its original position.

Day #6. Mood meets tool. A lot of fun today, as I've practised with a bunch of tools, many of which had been sitting on my drawer for some time. A number of them, in an unusual way (as the Brause, which I use for writing the Chancery hand or the Pilot parallel pen, which I used for the Gothic or Blackletter hand until I followed Seb Lester's course within this very same challenge and then i started using it for the Chancery -or Italic- hand too). As the photos are self-explaining, I won't linger any longer on the details.

Day #5- Capital letters. The nib was again the Zebra G mounted on an oblique holder. The ink, Winsor and Newton's Calligraphy ink.

I chose U and X as my least favourite letters but that was because I had to pick up just two of them. The rest of the alphabet could've played that role so I have still a long way to go. Nevertheless, it wasn't that bad.

With respect to my inspiration sources, I checked three books [see *] and a couple of web sites on the Spencerian script. Then, I did what I could and you can check the outcome below ;-)

Day #4. Today, i've tried two nibs with an oblique holder. On the one hand, the Brause No 361, the "Rose nib". I liked this one though I couldn't quite feel at ease with it. On the other hand, the Zebra G. I get along really well with that one so I went back to it as yesterday I couldn't practice and today i wanted to catch up (I've completed days 4 and 5).

My creative break has consisted in writing eight lines of the song whence my sentence comes from. The song, "The Road Goes Ever On" was written by J.R.R. Tolkien and it appears in The Hobbit and The Lord of the Rings (it was meant to be a "walking song").

With respect to my calligraphy, I think I'm improving, though I need to work (much) more, especially on the slant and spacing, apart from getting more consistent in general.

Day #3. New nib. Today it was the Zebra G (couldn't get a Nikko G around here) with an oblique holder. The Zebra is a nice nib (I like its flexibility) and the holder was a game changer for me. That doesn't mean that I made a giant leap today but, by using this holder, I can keep the paper in a position which makes viewing and writing my strokes much more comfortable. I also changed my technique so that my forearm drives and guides the motion for writing my strokes. Well, as it can be seen in the accompanying pic, the results are not consistent (yet) and, at times, I keep struggling to actually use my forearm instead of my fingers :-( My daily strife as a lefty also includes dealing with ink smears, smudging and spots. My approach consists in an ink eraser though at some point i could favour a cutter as the Medieval scribes did ;-)

Finally, my sentence looks worse than the one I wrote yesterday but i think that's one side effect of the changes I've just made to my technique.

Ups, I almost forgot it! None of the proposed tasks required just ten minutes for me. Each and every day, I need warming up, lots of testing, repeating the drills and some ninety minutes later, tackle the task for the day. I wonder if it's just me or it's a common issue among beginners.

Day #2. I changed the nib. Today, it was a Brause #361. There's still a lot of work to do but, as Bryn said, a small improvement can be already seen. I'm trying several alternative movements: finger drive, wrist drive and forearm drive. Each of them feels better for some particular stroke (or group of them). I think the forearm drive strains my muscles less than the finger or wrist drives but I'm still struggling to build some muscle memory and some positioning and paper rotation (90° vs 45°). Nevertheless, writing letters at an angle means imagining the motion (ductus, I'd say) in a different way and I think it's going to take some time.

Day #1. This is my first attempt at pointed nib pen. A bit wobbly, as you can see. Being left-handed, I've needed to work out how to do it. I tried several approaches. The hook didn't work well for me, so I changed to a 90 degree rotation of the paper, which allowed me to hold the nib pointing upwards and hence, keeping the common writing direction. For the training strokes, I eventually managed to get a not-so-bad outcome. As you can see, writing letters was a different thing. I'm going to need a different approach to the strokes or a different ductus for the letters.

By the way, my nib (I'm planning to try a number of them) was Gillott's #303, the ink Winsor and Newton's "Calligraphy Ink" and the paper Navigator 100 gsm. 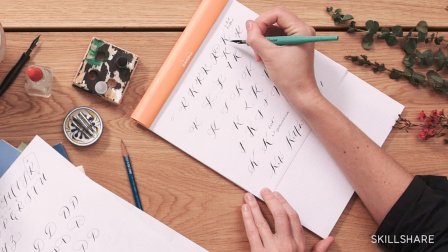