Below is the moodboard I used for Temple, which was just released online (for those who are curious, scroll to the bottom :)

START WITH A SINGLE IDEA OR IMAGE

As I mentioned in lesson 2 of the class, sometimes the easiest way to get started on your film's moodboard is to start with a single image. Pick one key visual that inspires you, and illustrates the world in which your film will take place.

This is the single image that I chose, which represents a future world that's flooded by the ocean:

From there, I started to put the pieces in place to fill that world. Remember, if your world doesn't work, then nothing in the world will work.

Due to my science background (I used to be a dentist), I'm always reading about technology and medicine, so I thought of this idea: what would happen if our bodies were to reject our own organs?

From this thought — combined with my love of sci-fi movies like Blade Runner — came the idea of cyborgs, futuristic visual effects, and of course a healthy dose of martial arts.

Here are the color references I pulled from various websites. Again, the goal is just to start painting a picture of how your film will feel, especially from a visual effects standpoint.

I wanted the main character to have a certain look in order to realistically fit into this world that I'm painting. Here are some of the wardrobe references I pulled for my main character, Oz.

I also do a lot of scanning for textures that I like. This will help you with location scouting, set design, wardrobe, and visual effects (you might recognize some of these on the antagonist's arm tattoo in Temple.)

If your film has some visual effects intensive scenes like mine does, you'll want to include some more images that help convey how this should look and feel. In the case of Temple, the arm scanner was an important scene. Below are some references I pulled to help illustrate this.

I know, this may seem like a lot of images. I tend to get very detailed with my projects :) Your moodboard may be much simpler than this, and only have a few images to depict your world.

Whichever route you go, this moodboard will not only help sell through your idea to your team – it will also keep you motivated throughout the production process, and serve as a helpful reminder for the vision you're bringing to life.

I look forward to seeing your moodboards in the Project Gallery! 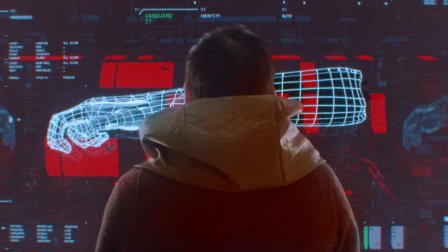 Indie Filmmaking: Get the Blockbuster Look on a DIY Budget
Nguyen Anh Nguyen