Taylor's 14 Days of Messages to Myself

It may seem strange to some that I need permission to "trust the process," but I am resistant AF sometimes. However, the overarching message from these last two weeks has been about transformation, change coming, keeping on keeping on... This phrase was literally in the oracle card I drew before my "listening" meditation - and it got louder and louder.

I am quite grateful to have found this workshop at just this time - both classes have been amazing. And, I truly believe, transformational. Not sure that's a real word, but it means a lot to me.

I don't know. Everything feels so wounded right now. But I keep getting messages about transformation, change, growth, and this ended up being what surfaced for today. Really wanted to keep working on the art, but I had to move on with my day, so I let it be. So interesting how different each one has been...

Think I might have added something like, "You are rocking it!" - but it just didn't happen. All I could come up with as I was thinking and listening for something to cheer me on was that I was making progress and that was good enough. That was ENOUGH! Sigh. Well, with some things, done is better than perfect. Hell, Progress is better than Perfect!

Really struggled with how to change my tone... And my day got away from me, swirling into my Stuck Muck, so I didn't actually do the piece until the next morning. But, over the course of my Yucky day, this is the message that came and wouldn't go away. Not sure if this represents a real change in tone for me (maybe the lack of color?), but I guess the point is that some kind of message comes - and then express that. Not trying to pass a test. Don't need to be a good girl and "do it right." Trying to spark self-care, connection to my kinder inner voice, and creative expression. So, I will pat myself on the back and go with "mission accomplished." (Now I just have to catch up with the next prompt!)

"There is always hope" was what actually came up in my meditation, but this is what it evolved to in the art making. Been thinking about my combination of feeling fearless and fearful a bunch lately, and it finally hit "the canvas" here.

I named this piece "Bouyed" when I named the file. Find myself wanting to go in and tinker with it, but I think it is enough. I am enough. Breathe... Relax... Float... Breathe...

Once again, yesterday's piece would have worked for this prompt - interesting... As part of my process, I let fate select an oracle card to read before I do a 5 minute meditation to listen for the message related to the prompt. Today the card was about focusing away from negative thoughts and new age positive thinking stuff: you attract what you think about, blah, blah, blah. Now, don't get me wrong, I do think generally thinking positive is a good thing. Wallowing in negativity is brutal for the human condition.

But unrelenting positive thinking can be toxic, can make you afraid to acknowledge the bad stuff - and that is like trying to avoid reality and living in an alternate universe. I mean, seriously, it's like gaslighting yourself, you know? And being afraid to have a negative thought can be exhausting and ultimately detrimental to your spirit and health.

As with most things in life, we need balance. Don't want to wallow in a pit of negativity, but forcing yourself to fake yourself into nothing but roses and scented candles when you are standing in shit doesn't make sense either.

Anyway, I can go on about that, but the message for this piece shouted out just a moment before my 5-minute timer ended my meditation period. And I believe it is exactly the right message for this difficult moment in our country's history. For me, anyway.

Ended up with three versions...

This was the image came up and evolved, but what was the permission message?

Okay, this was definitely part of the message (I've been fighting a sense of doom and hopelessness recently), but I felt like there was something I was avoiding...

Oh, yeah, this is what I was avoiding listening to... I think that is reflected in the blurriness, although I didn't really notice that until looking at it again after I'd declared myself done.

Also expresses my frustration that Liberals don't seem to be allowed their patriotic rights to red, white, and blue these days...

I really felt like I hadn't been paying much attention to listening throughout the previous day, but proceeded anyway. During my meditation, I realized that I'd been getting a lot of messages telling me good change is coming, that I am approaching a transformation, and that I am ready for it, regardless of my fears... And this is what developed to express that. So there you go. Fascinating how the creative brain works, magically making things flow onto the canvas.

Yesterday's piece could have been for today's prompt. But I am calmer today, and I found myself contemplating the theory that we are here to be what we are, that our value is intrinsic, not earned. I believe it was Carolyn Myss who said your entire purpose in this life might be to smile at a stranger, saving them from personal doom which allows them to do something grander, something that might seem more important... Because I was raised in a culture that says we must produce something of cultural or financial "importance", "be somebody," to achieve our potential in life. But I think there is great value in bringing what you bring. And that that is enough.

It's all complicated and makes me uneasy. However, recently watching the amazing documentary, "My Octopus Teacher," the lesson learned was very profound to me (I was tempted to quote it in my piece today): "I realized I'm a part of this world, not just a visitor. And that's a big difference." (Pretty sure I'm not exactly accurate on the quote but very close.) That has really resonated for me. Even amidst the constant barrage of internal voices that keep insisting I need to do and be more.

Rough day. Overwhelming emotions. This piece became a weird bunch of experiments with unkind voices in my head bellowing that none of it works... Even while I was fascinated with what I was discovering. I'm not sure it makes sense - compassion is certainly more substantive than icing, right? Unless you like the icing more than the cake? Anyway, I have succeeded in slogging through finishing it. Took numerous hours over the course of the day. Done is good.

Today I realized I'm actually making some progress with my self-care activities. Walking the dogs first thing in the morning, brushing my teeth before I go to bed at night, and being committed to my online art classes, working the processes for this Workshop... Feels a little like progress. I'll take it!

It took awhile to get it done - had to take a long break between watching the video about the prompt and actually doing it (had a live Zoom class to attend and other life chores), but it came out good for me. I, again, was anxious about "hearing" or finding the one word message. And, again, I discovered during my meditation that I was thinking "maybe something like persist" - and then realized that persist was it!

I had a somewhat different idea of what the image was going to be when I started, and it continued to evolve as I worked it. Decided that was okay and enjoyed allowing the process to play out, excited to see the result.

I can already see things I would "fix," but I'm going to let it be. On the most basic level, this is what it's supposed to be, right?

Wow. I was so anxious about trying this. Felt so uncertain anything would come or that I would be able to express it. I was concerned that it might be a problem if I didn't do the process at the end of the day, but I already have an end of day practice for journaling, and I didn't want to crowd that. So I created my plan doing it earlier in the day - and my feeling now is that it worked! My message came to me so easily once I focused on listening for it. I'd instantly identified my dominant emotion of the moment (aside from anxiety - ha!) but wasn't sure how I'd come up with a positive message about "rage." It came to me almost instantly in my meditation! Along with ideas for how to express it making art. I've never made art that looks anything like this. I feel like I've touched something magical, and I'm pretty excited to see how things proceed. Just, wow. 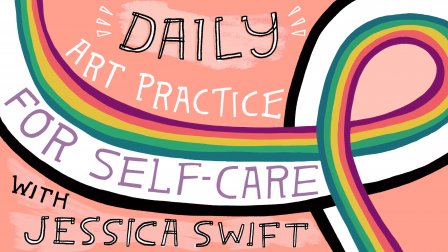 Daily Art Practice for Self-Care: 14 Days of Messages To Yourself
Jessica Swift