Taming the Shadow Monster- Before and After!

This is the same photo taken last year at the Matisse (Arabesque) exhibit in Rome. Italy. (Some of you know what a color geek I am, so this show was a must-see.) As we rounded the corner to head back downstairs to the gift shop, we got a glimpse of a lovely view of Rome from the window just as the sun was about to set.

Taken on just my husband's terrible cell phone camera, of course we weren't able to really capture the moment in all its glory.

Still, we had something, but because he took the photo of me with the light behind me, I came out like a typical shadow monster. Playing with the image a bit, while not an ideal image to work with for professional purposes, I thought I could still rescue it enough to share with family/friends on Facebook.

I adjusted my levels but mainly used the middle gray slider to lighten up myself. I then adjusted "brightness/contrast" a little as well as played with "saturation."

I was more or less happy with lightening myself up but I had then accidentally/unavoidably washed the view out a bit too. So I took my doctored image and put it on it's own layer. I then opened the original underneath that still had the nice background. I then, in my doctored, lightened-up layer above, erased the area in the window to reveal the original below. Where I got sloppy around the edges I used my blur tool so a viewer wouldn't see my fix.

This took me about 5 minutes, but of course if you are new, it will take you longer. (It all gets easier with time and practice though! Take heart...)

Just thought I'd share to show you how you might make a similar fix. Of course, getting the light right the first time when taking the photo helps. :-) 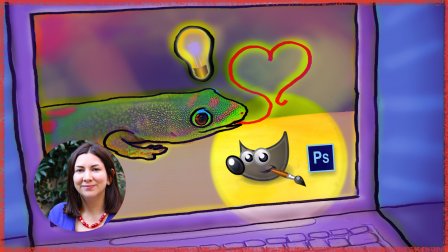