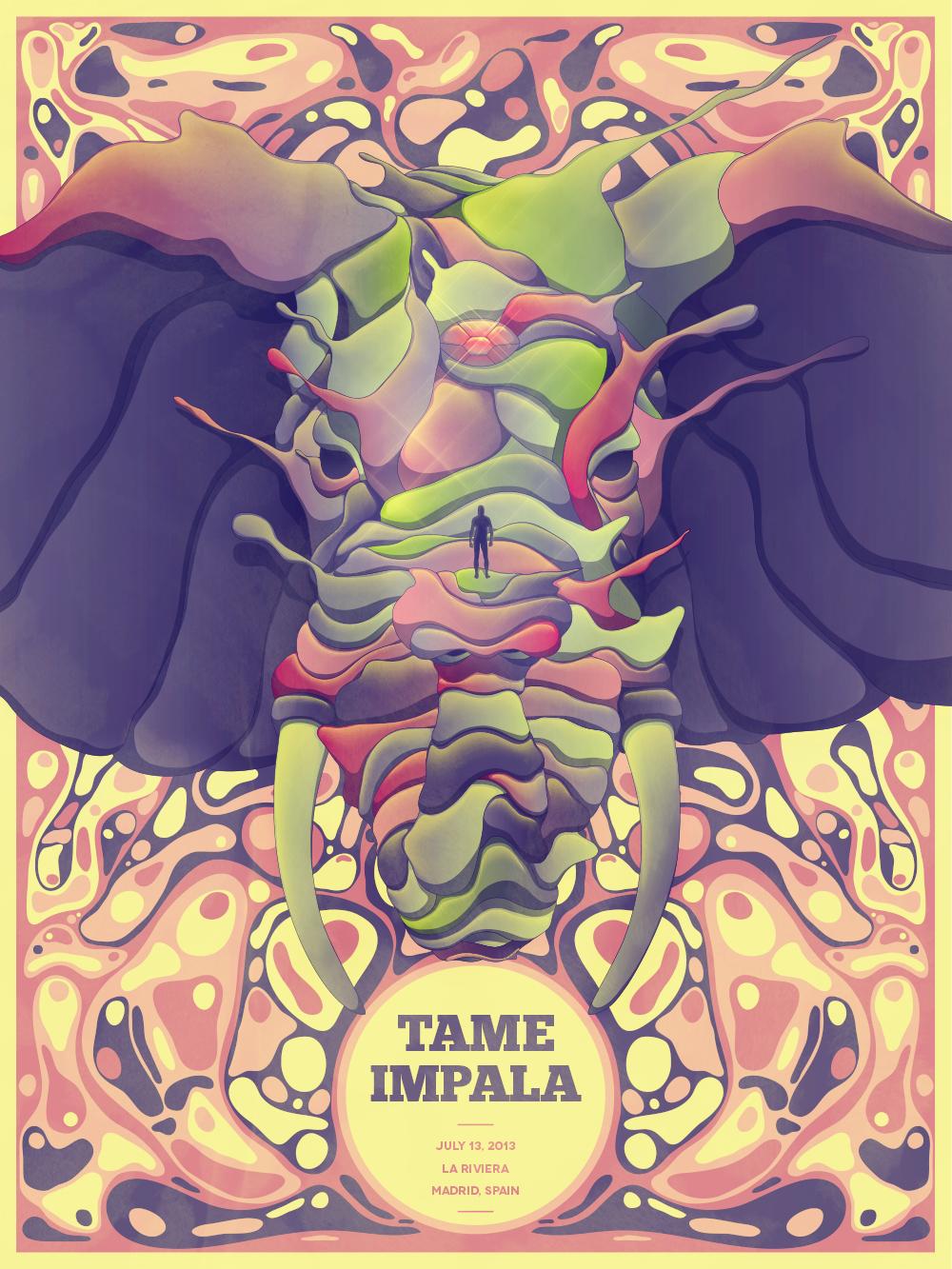 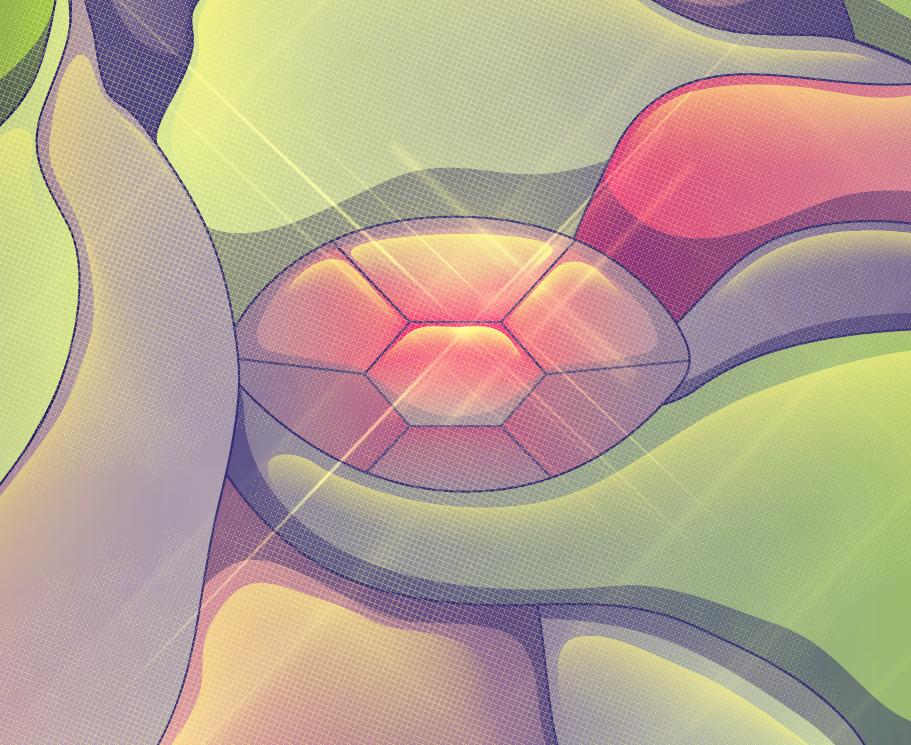 Hey all!
I've to say that I'd wish to explain more but I don't have a very good English ~~.
I hope to be clear enough...
And of course comments are welcome!!

Tame Impala Poster that will be used as a marketing piece to promote the following show:
Tame Impala · 7/13/13 · La Riviera · Spain

RESEARCH:
- Tame Impala is a band from Perth, Australia.

- They like to see themselves as “a steady flowing psychedelic groove rock band that emphasizes dream-like melody .

- Interesting quotes from interviews:
Their name refers to the impala, a medium sized antelope. (“the name ‘Tame Impala’ is just a reference to the African animal really, from a perspective of coming into contact with a live one, one that you’d come across in nature and having this real brief, unspoken moment but with some level of communication between yourself and this wild animal. Then the next minute its gone returning to where it came from.”)
Speaking of the album’s “explosiveness” Parker said “With Innerspeaker I was more into melodies that beam at you rather than wash over you. This time, I want the songs to be like waves that hit you rather than you swimming in an ocean of melody.”
“Apocalypse Dreams”, the first song to be released from Lonerism, shows this change. It features poppy verses featuring piano stabs and a poppy melody. The choruses and outro of the song feature the classic Tame Impala sound, only more lush and expansive, with heavy guitar overdubs and synth effects.
“For me it’s like the last album was singing about someone who’s already blissfully in oblivion, so I was already there. Whereas this album is like the child version of that, someone growing up and discovering other people and just realising their place is not involved with the rest of the world kind of thing. Like discovering that you’re a loner.”

- Some Covers (By Leif Podhajsky):

- Designs from other designers: 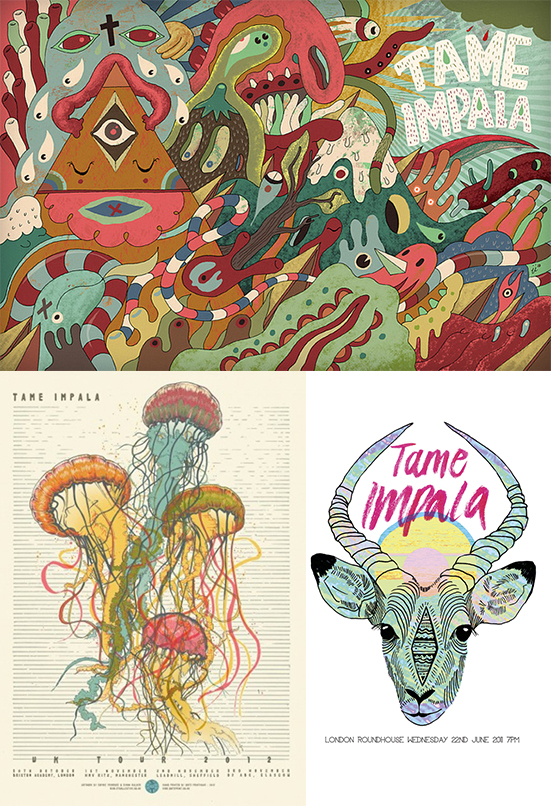 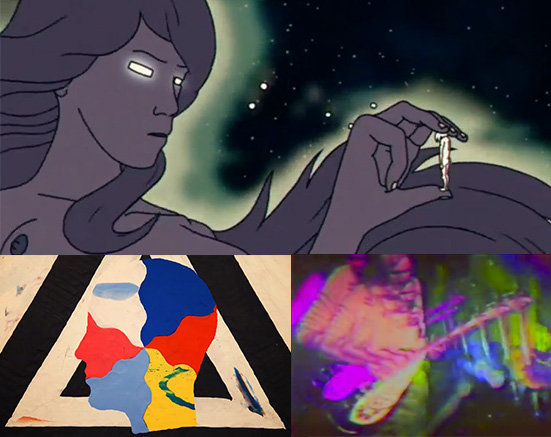 Taking into account where the name comes, I'd like to use this 'connection' between an elephant (wich is easily recognizable by their fans because is one of the most important songs of the band) and the person. Also, the elephant emits a spiral wich hypnotize the person.
For this picture, I'd like to use my style (the bottom picture) that I think it matches with the style of the band. 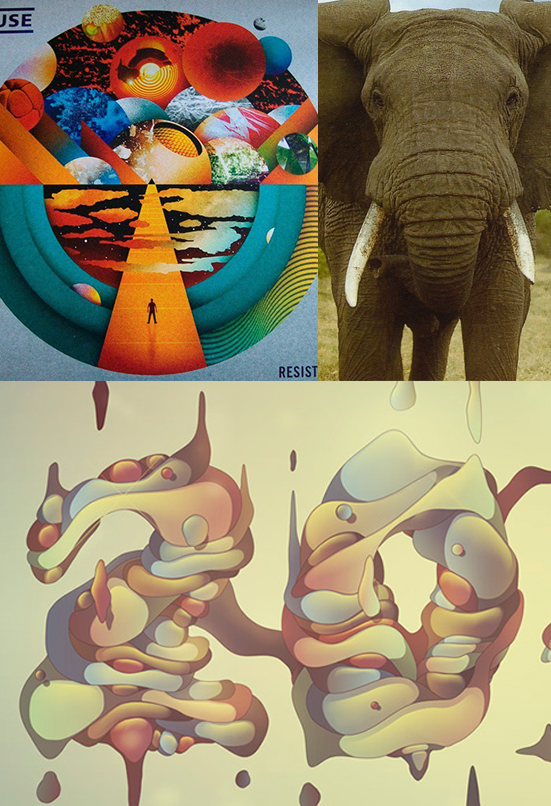 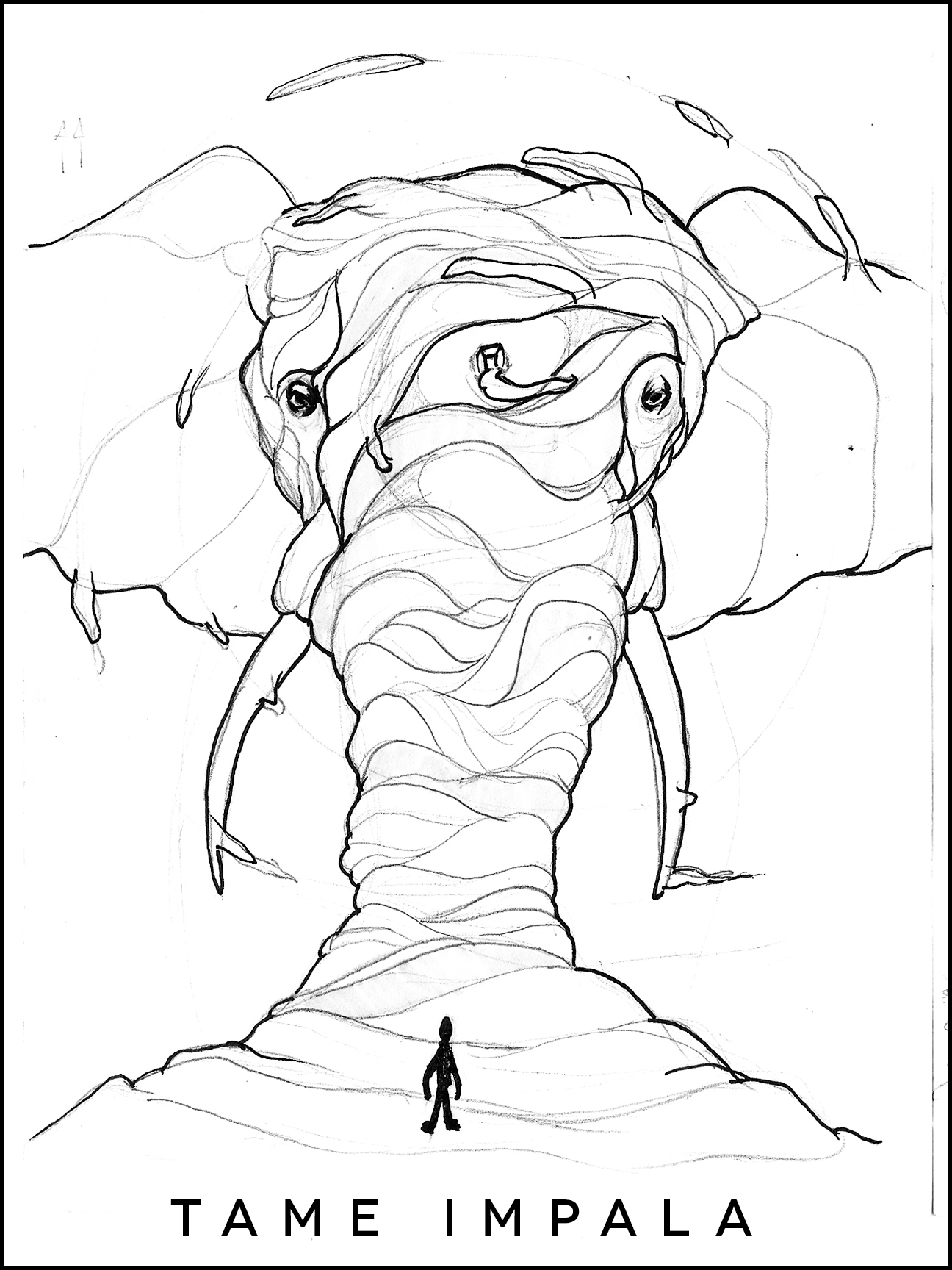 A hippie van that takes a 'trip' in a colorful tunnel.
I'd like to use a custom lettering similar as the Victor Moscoso's (left image) but maybe with more actual look and with better legibility. 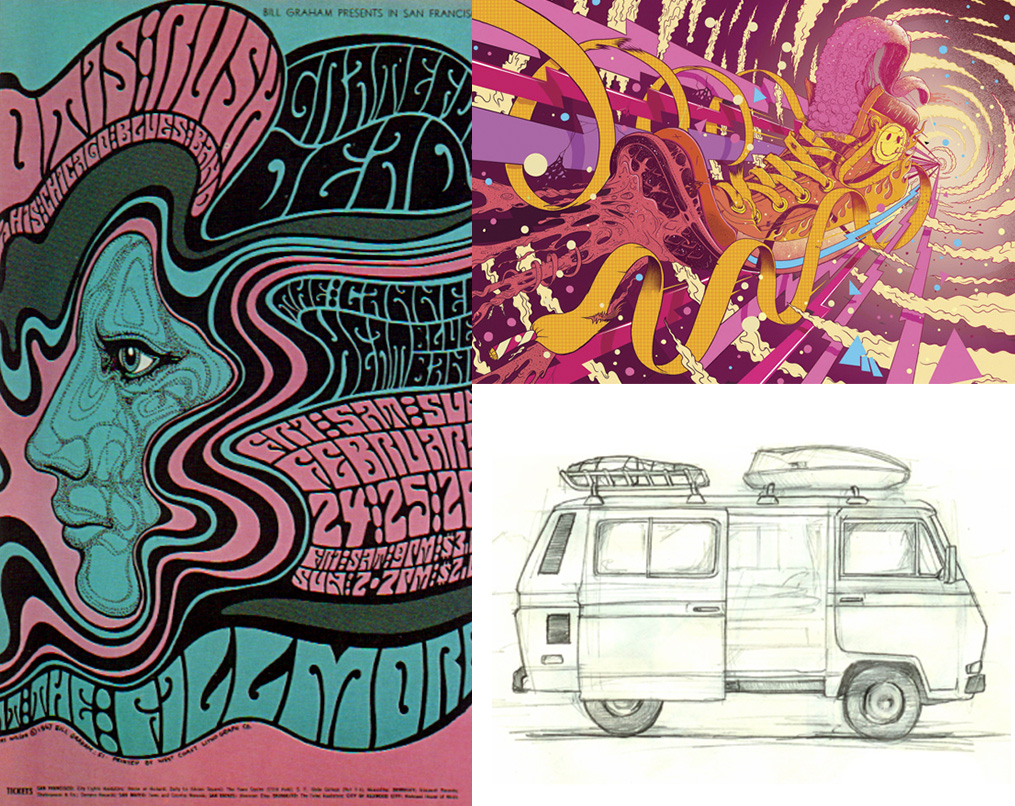 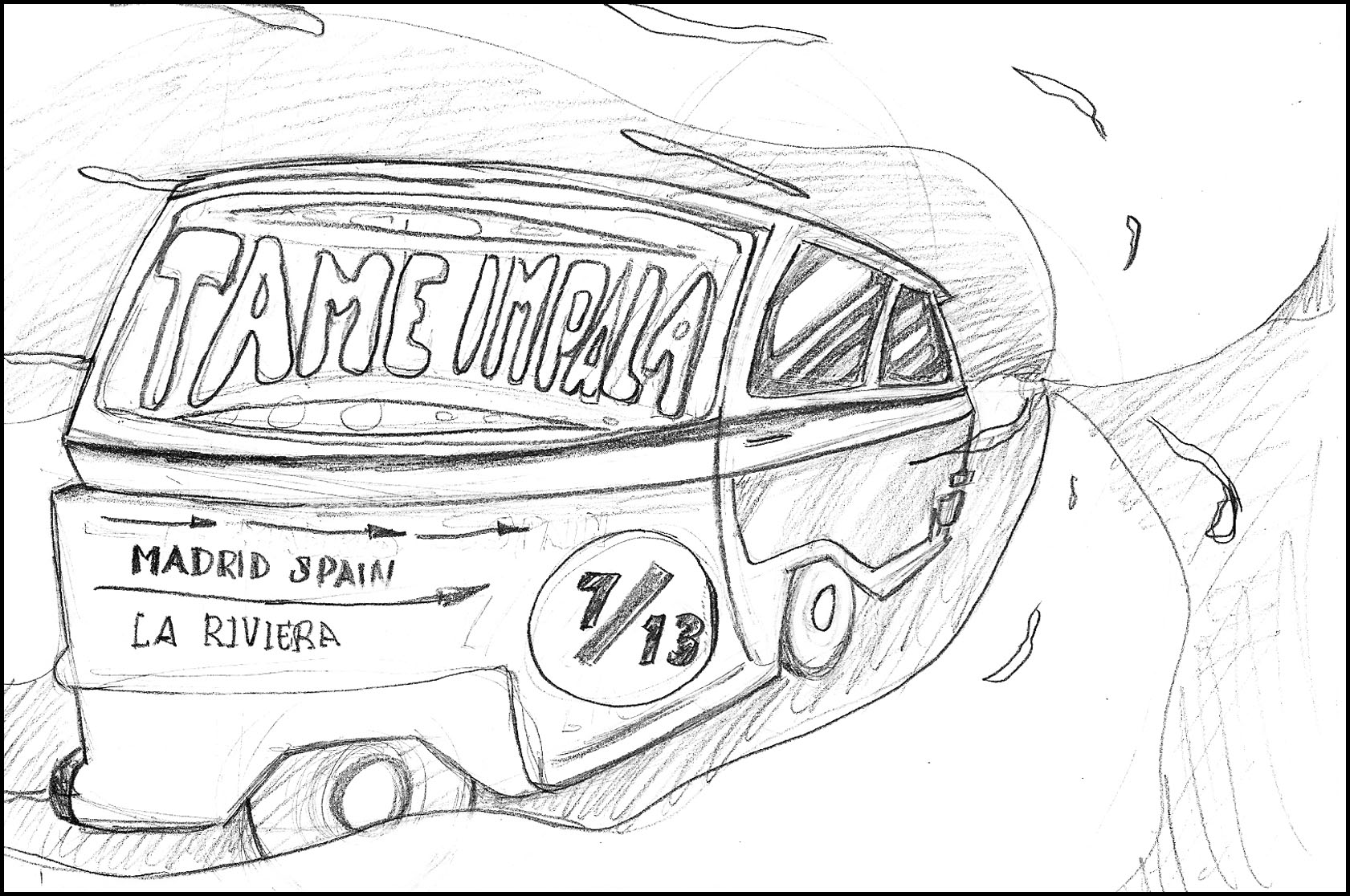 But before I start, I preffer to work first in the composition, and I'd like to get some feedback. :)

I've done this fast sketches, so let me know wich one do you preffer. I preffer the 2nd one. 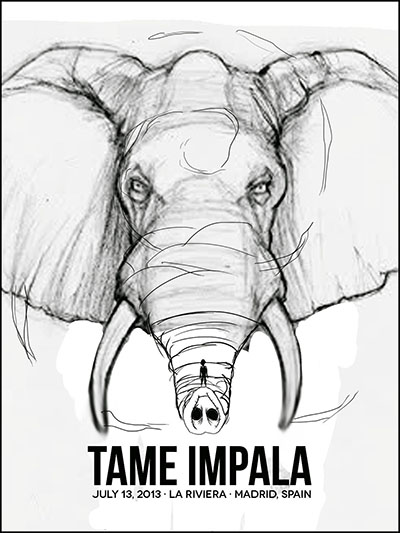 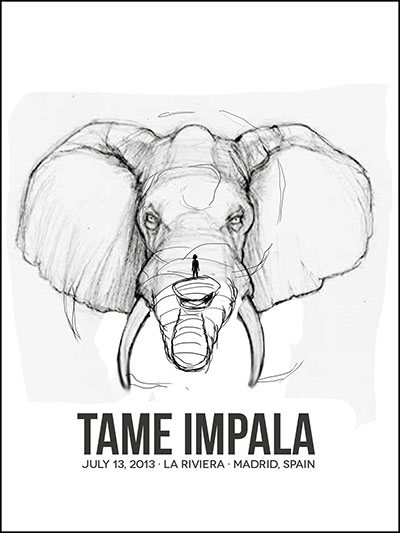 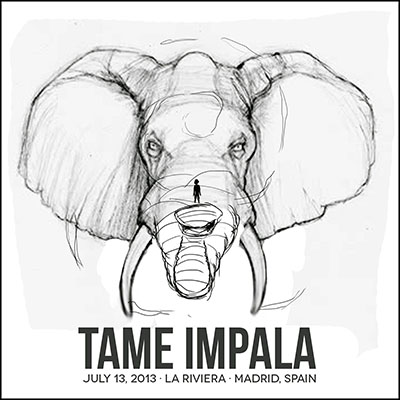