Well, this was a fun class, and I sure learned a lot. Here's a bit of my process:

Easy enough for starters, though I did wonder whether I was going to regret picking a chair that's so much more complex than the one Tom picked. Turns out it wasn't too bad, but I did completely forget about the lift handle.

When considering the kind of plant I wanted to draw, I decided to go with some kind of flower, as I felt it would add color to the piece (though in the end I opted to make my final work black and white).

This one was a bit trickier, not only because it took me a while to nail the plant's look, but also because Tom repeated what I dreaded most to hear: that I should try to draw without looking at my canvas. This is something that art teachers say a lot, and I've never managed to figure it out. For that reason, I made another small exercise before moving on to the next video.

I have a little black toy pig whose eyes pop out of their sockets when you squeeze it. I named it Napoleon, after the character from Animal Farm (and that's why he also deserves all the squeezing). As you can see, I tried drawing him without looking at the canvas, and the result is disastrous. I know, the result shouldn't be the important thing, but I also felt that I wasn't making any real useful progress in understanding the object I'm drawing, and I was getting very frustrated.

After a few attempts at drawing without looking at the canvas, I decided that I've had enough of this concept for a lifetime and opted to draw and also look to see what I'm doing. The result was much better, I believe, if for no other reason than I felt better about it. Even though I allowed myself to look at the canvas, I did make a point to try and draw what I see and fought against my habits to draw things in the way I'm used to, so I believe the important element of drawing from observation was still there.

I took a photo of myself and drew it. I look a lot older and angrier than what my drawing implies, but oh well. I did manage to get my likeness quite nicely in the ideation stage, I believe.

I have a keytar right next to my desk, but at first I left it out of the workspace drawing. While working on the final project, I decided that I should add it, because the left side of the page was a bit too empty, so before adding it in, I made this quick observational study. Drawing a keyboard can be a pain, because you need to fit a very specific number of keys into a limited space, so I decided to cut corners and make sure that at the very least I have full octaves and that it doesn't appear to end abruptly. In this drawing, I messed up the black keys at the bottom, but as it was just a quick sketch, I let it be.

Because the leaves of the clivia go up and then curve down, I thought they would be a nice framing device for the final piece. I also didn't want my workspace to be the main focus of the work, as I wanted something more relaxed and ponderous. I removed a lot of details from my desk for the same reason.

Not much to say about this one. It's all part of the process of making things look better, as a refined sketch would imply.

And so we return to the final piece. I'm very happy with it, as it allowed me to test out some new shading and texturing concepts I had. I tried very hard not to go overboard and overwhelm the canvas with black, so I mostly shaded and textured the plant and the character, adding only a little bit of black filling where I felt it looked a little too empty.

If you read all of this, I hope you found it interesting, if not helpful, and good luck/congratulations on your own project! 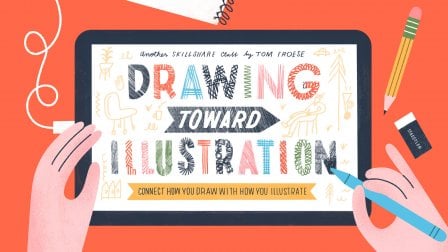 Drawing Toward Illustration: Connect How You Draw with How You Illustrate
Tom Froese