Update something - i overbooked myself!

Well that's okay. these aren't coming out totally how i had expected but I shouldn't be surprised. I overbooked myself with a bunch of client work near the launching of a product and another class. stupid on my part BUT I'm extremely happy i did it nonetheless becuase I got an amazing insight into one of my favorite illustrators currently (seriously dom you're top 5) and i learned a lot from it. And i gotta go back and grab the videos etc so i have em in my library.

I think the issue with what i've got is i'm too scattered conceptually. I dont know what i want to do - do i want to recreate the level? just take one element from it? one enemy? a metaphore? etc. I simply spent too little time in the beggining stages, but that was becuase i wanted to keep up with the course.

Anyway! here's whati've got so far. I think i'll revisit this series sometime when i have a bit more time becuase i love the idea. I do really like paying attention to teh gestalt rules while doing this sort of stuff. very interesting. 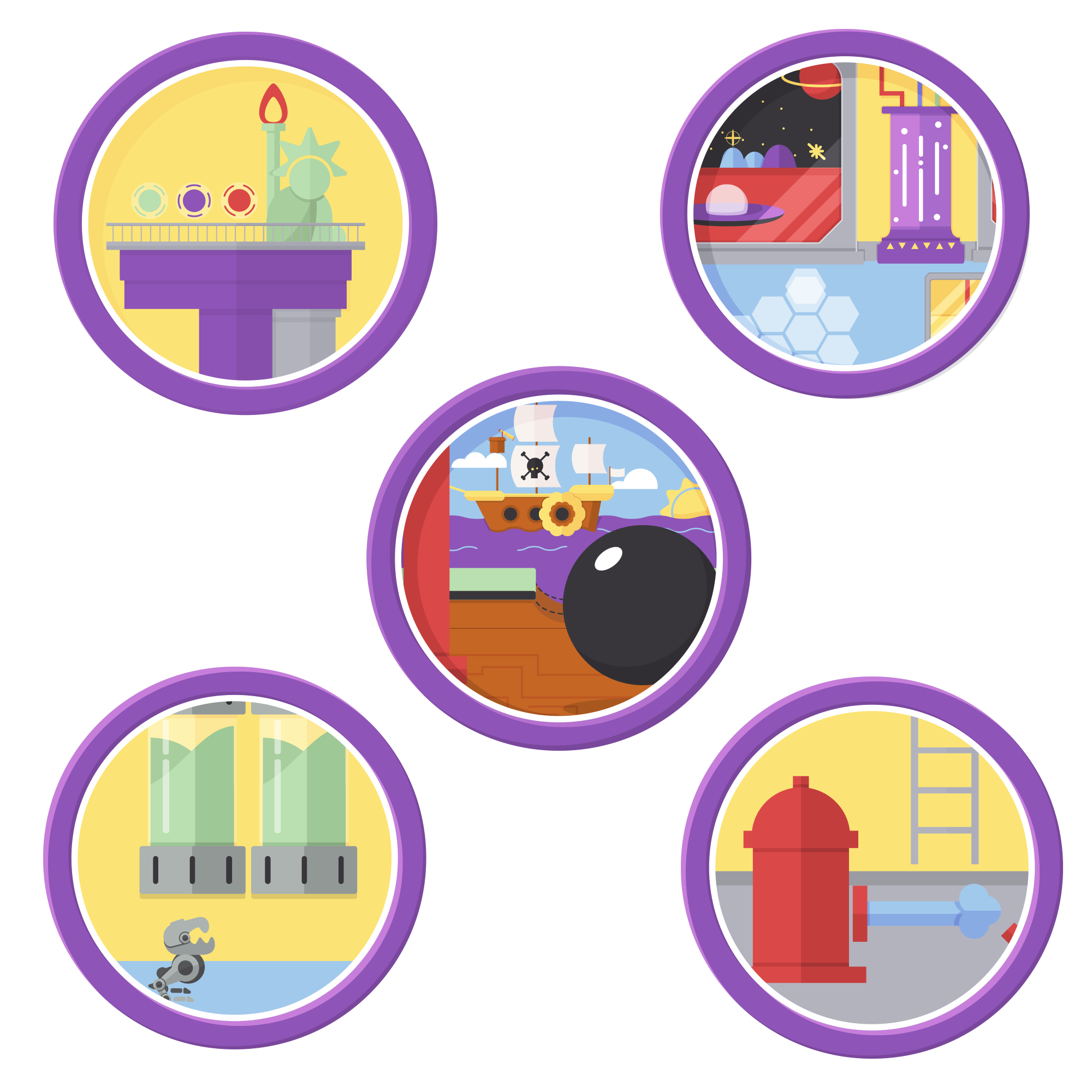 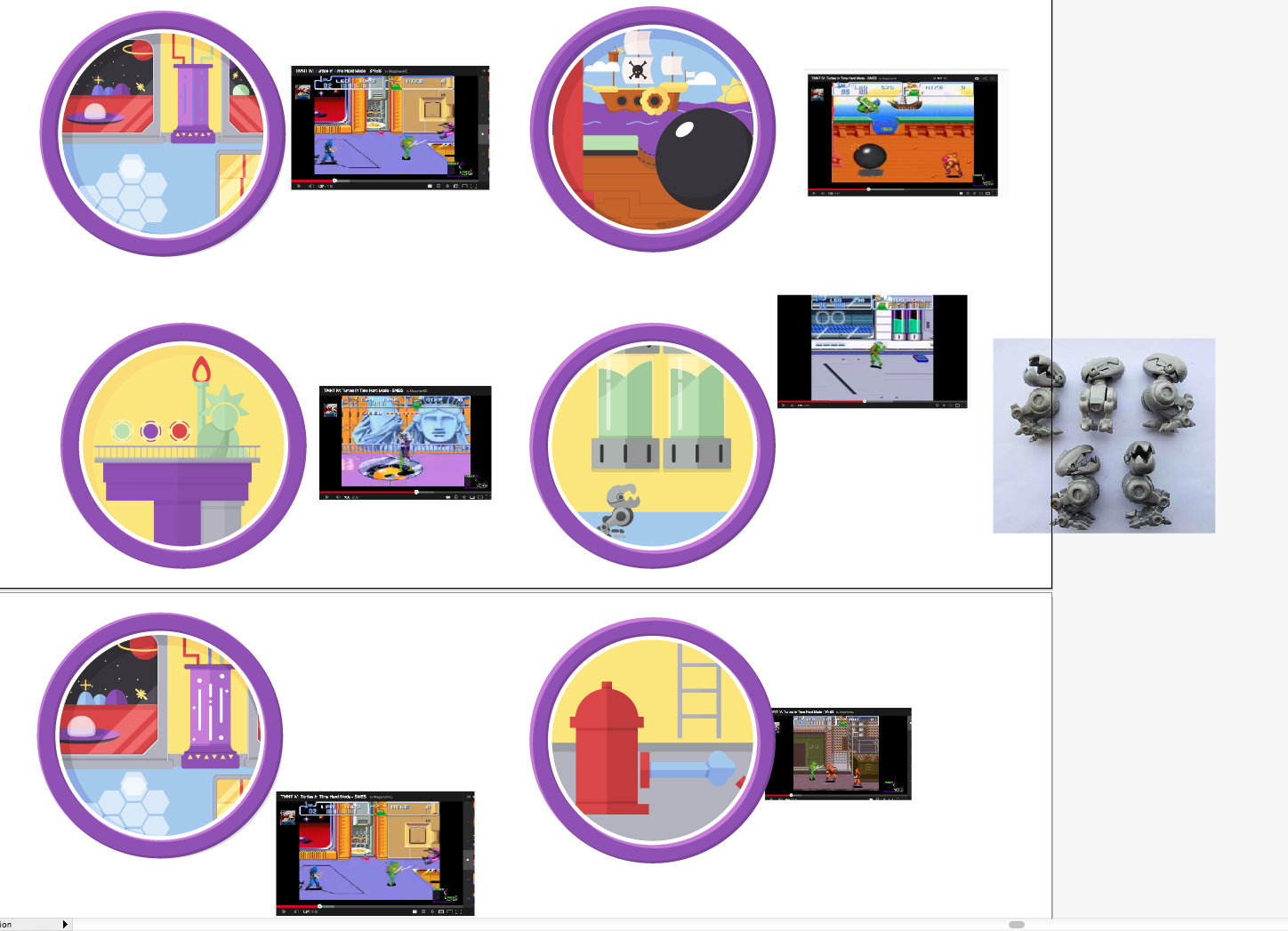 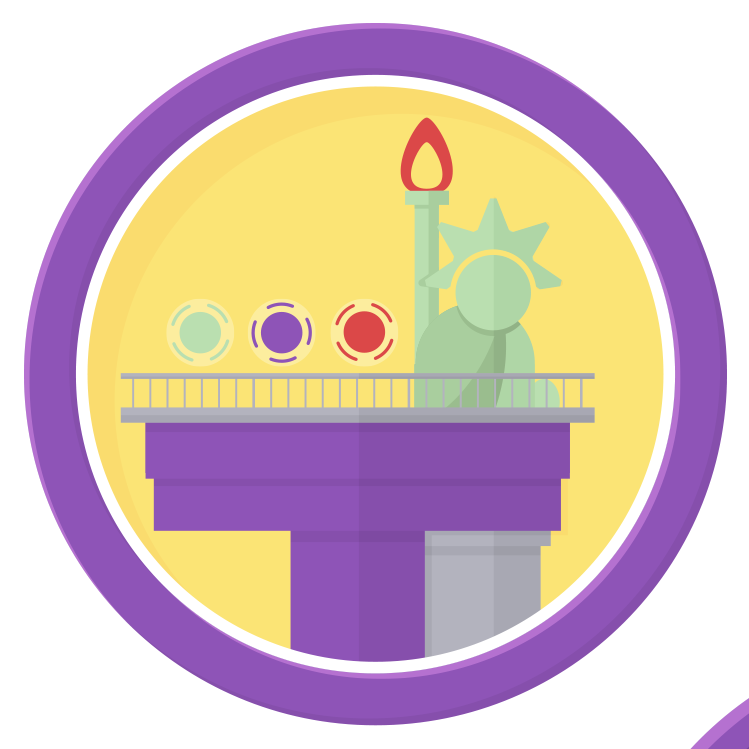 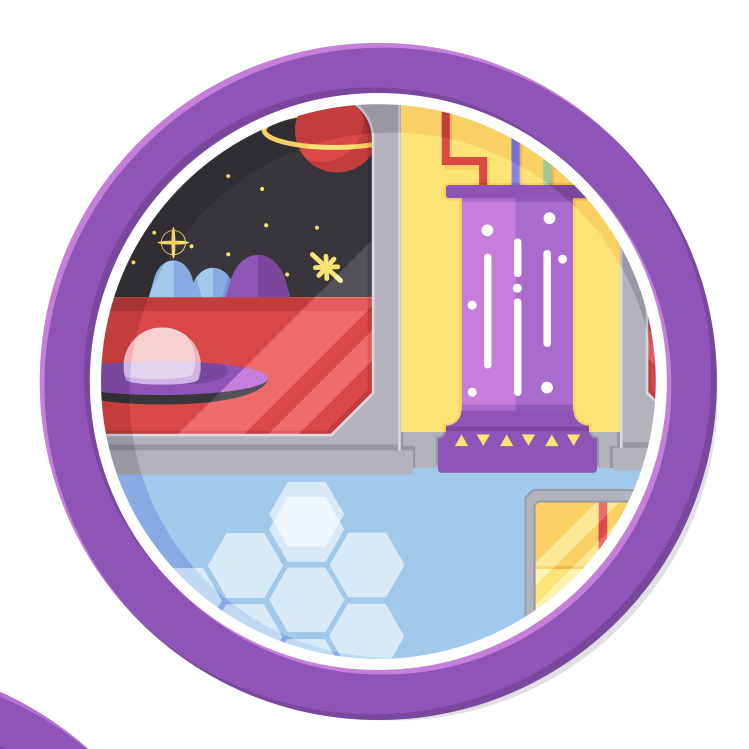 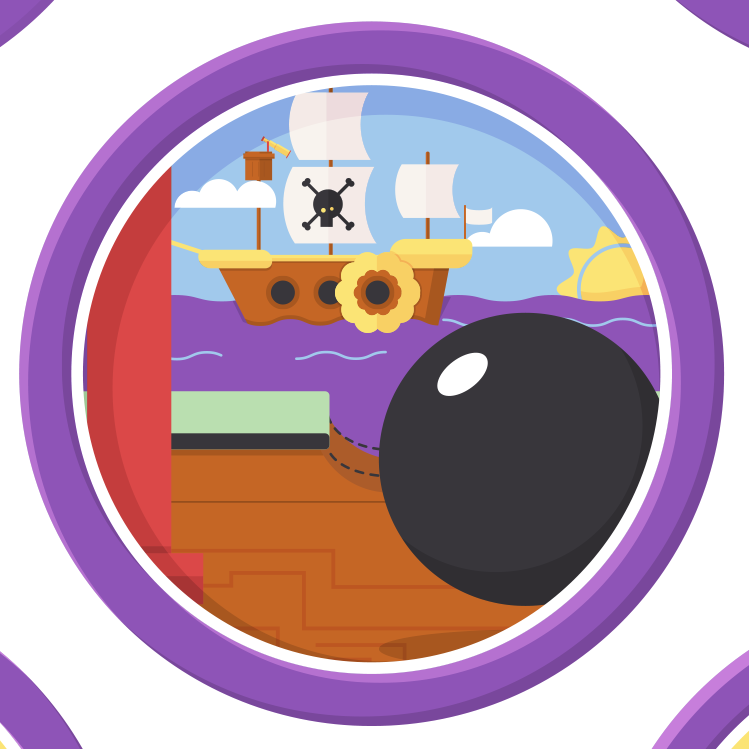 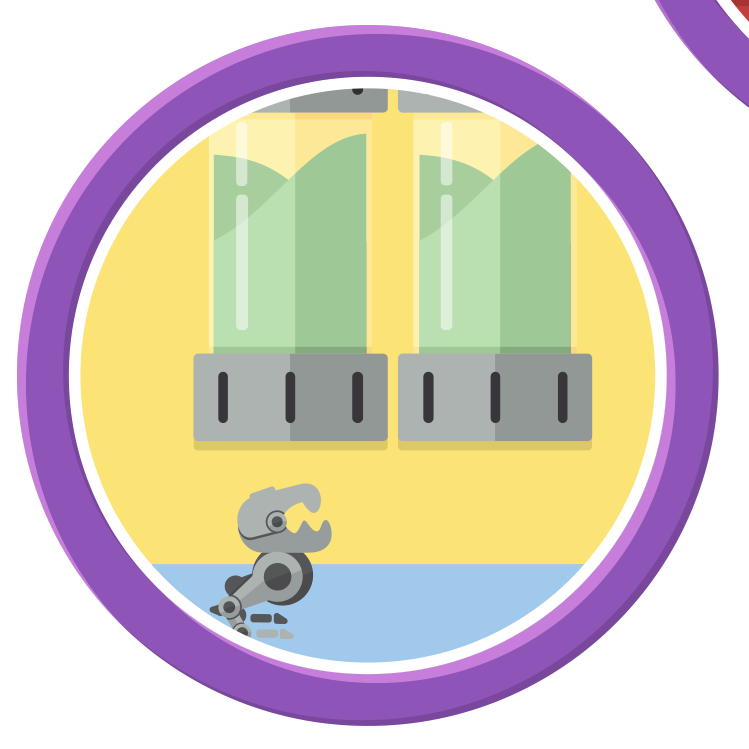 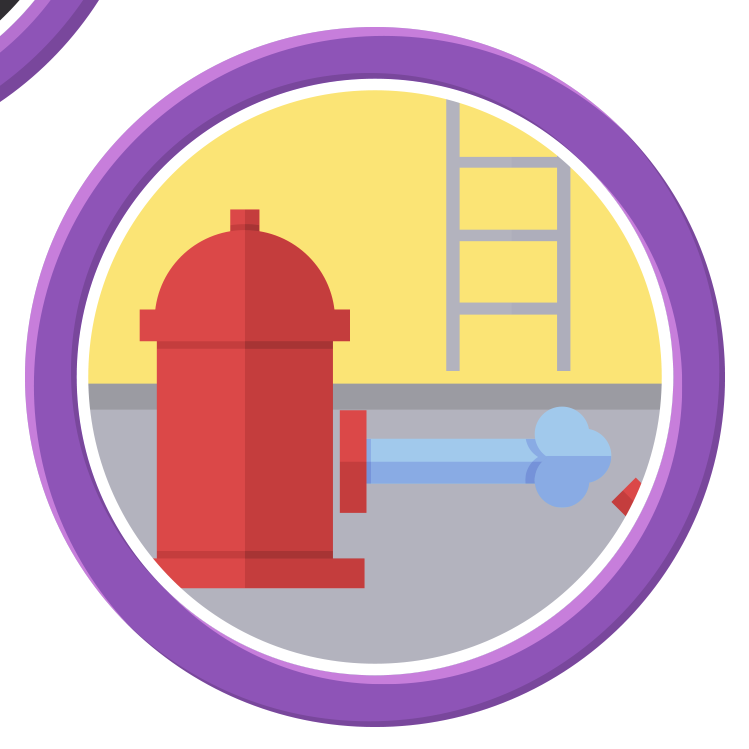 I find myself using the gestalt rules a bit without trying to force them. I love learning more theory to the reason why I do things subconsciously already.

I've only got 3 ~80% finished and think ill call it a night around 1am tonight. I'll see if i can get 1 more done. I've had a tough time finding a color palette that fits all of the levels, but it's starting to work. I'll upload the 3 here now. 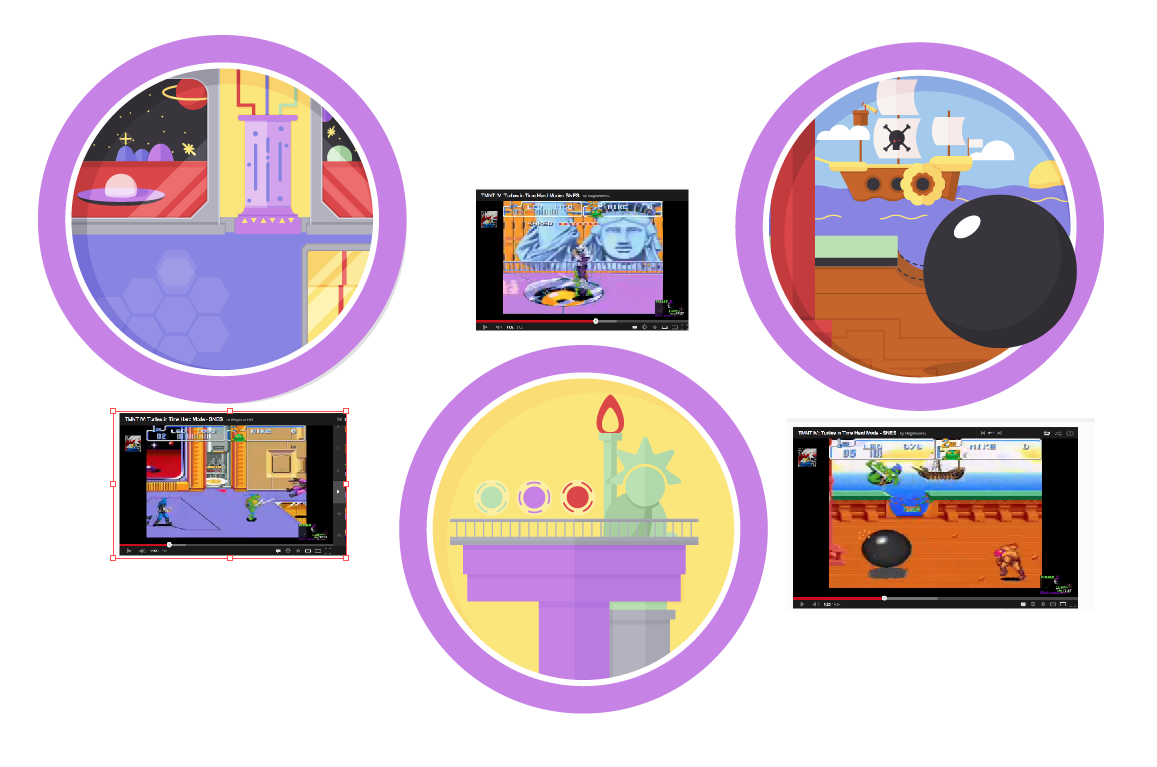 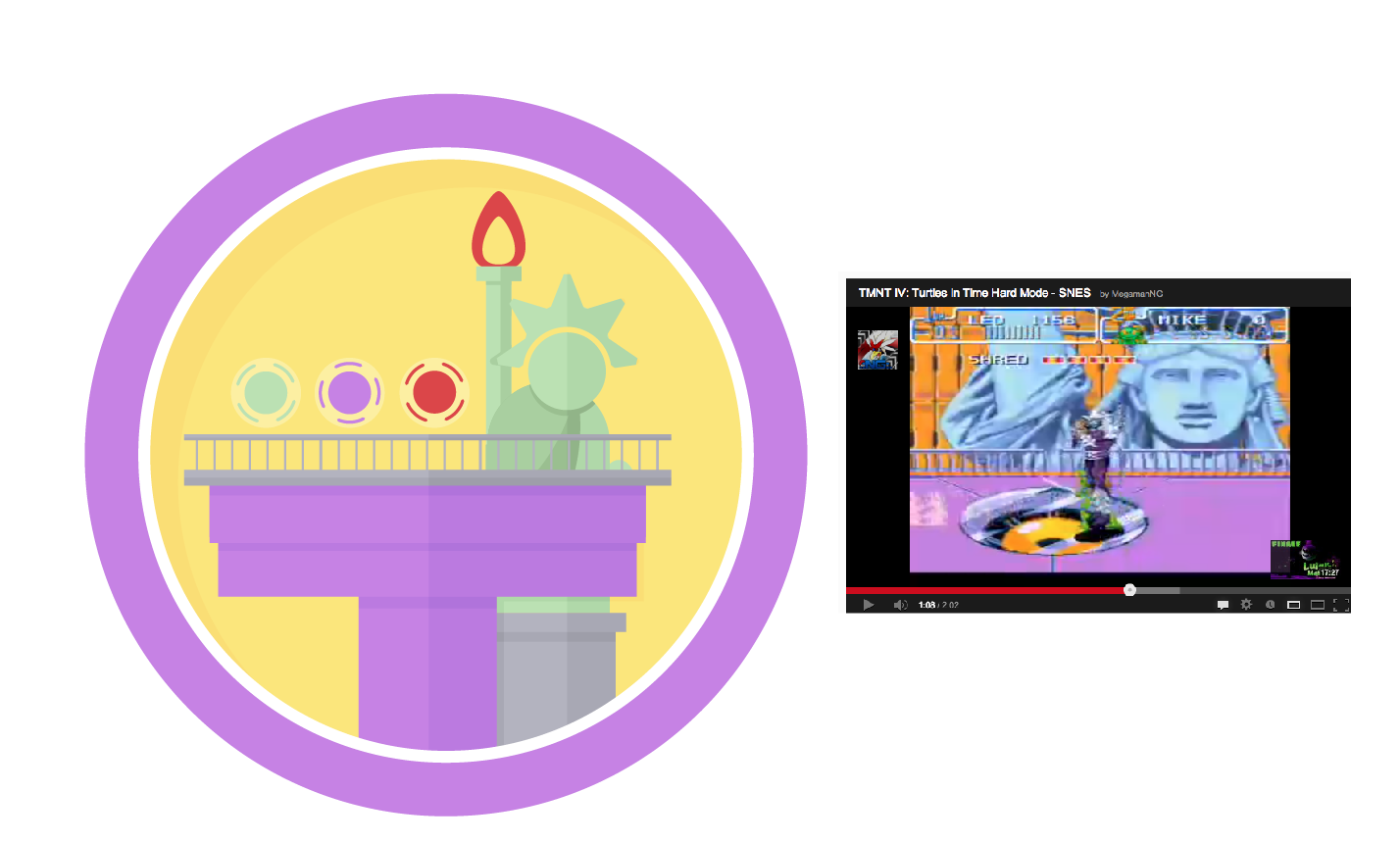 Statue of liberty with super shredder

Where the statue of libery is being kept (shredder stole it cuz he hates liberty or something) - the 3 colors are for the 3 energies he uses against you as weapons as a boss. An ice one, flame, and .. green. the statue of liberty in the back. 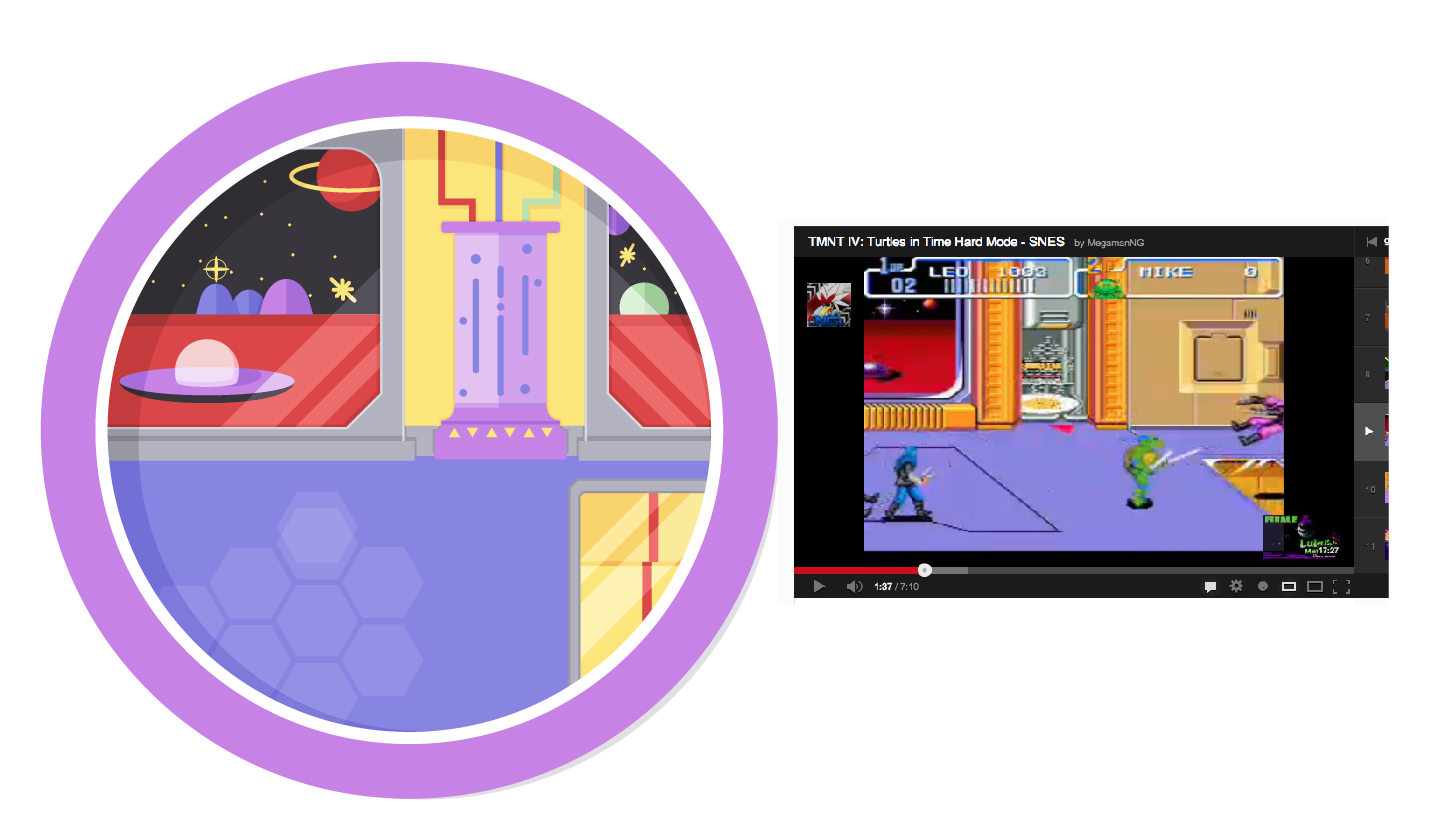 Starbase: Where no turtle has gone before

The space level, the teleporting device that the foote use.

The planet outside in the background, and the weird little teleport thingies on the ground that light up randomly and hurt you. Maybe you recall them. 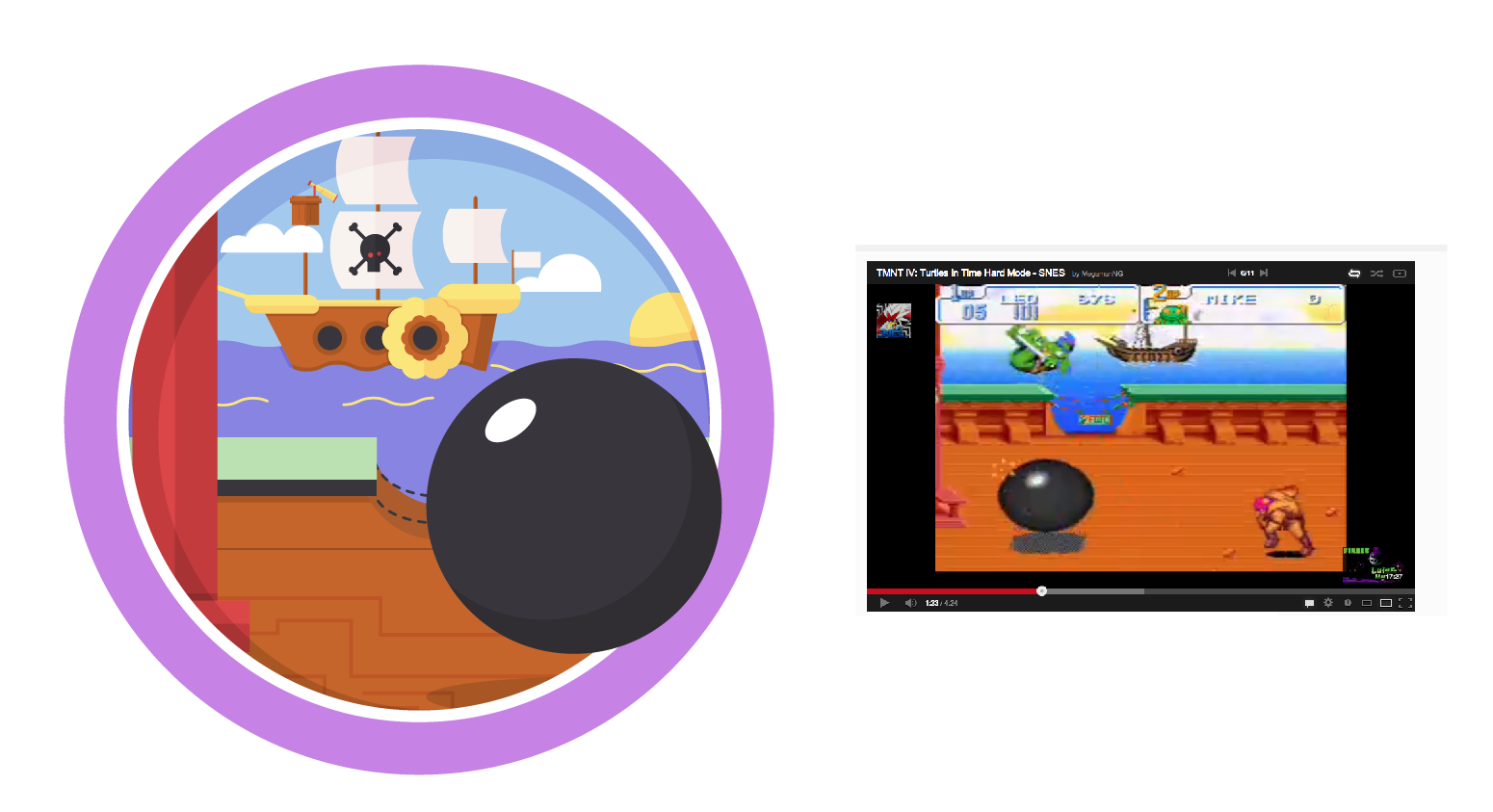 The enemy foot ship shooting the damn canonballs onto your boat while you're fighting the stupid rock men and trying not to step on bad boards that hit you in the face.

1. Ask yourself the who, what and why of the project. What are you making? Why are you creating it? Who will use or view the final product?

I want to create a badge / icon for each of the some 10 levels in the game TMNT: Turtles in Time.

Each level has a very unique feel, mood, goal, etc. That's the idea of the game really, each stage being a different time in history.

I look forward to playing off the art style that's arleady defined in the game and specifically each level. Colors, characters, buildings, landscapes, etc.

The ninja turtles have been a staple to me forever. I don't think that needs explaining. This game in particular has been my favorite of the franchise. Co-op on screen, a beat-em-up, great characters, amazing soundtrack (bury my shell at wounded knee specifically) and so on. So I'd love to do each level justice.

This will be an homage to the game more than anything and a great subject as it's interesting to me. I think I can think of this functionally as something that would be given out as achievements for beating each level, or badges to say 'i beat this level'. So the trick will be identifying the level / objective for each one very clearly.

I'm going to admittedly be inspired a lot by Dom's style - that's why I took the class in the first place. I am going to try to follow his rules as closesly as possible to help myself in the most basic of way, just learning how to think differently. It might not be better all the time to do it Dom's way but for now I'd like to at least try it, learn it, and take what I can from it and apply it to my own workflow and style.

I'm thinking to ground all my icons in a SNES game cartridge. That will give me a nice canvas, I will likely crop the cartdidge either with another shape, or just in general. Showing enough of the cartdidge so that it's obvious, but not wasting space, as I'd like these to translate to a small canvas pretty well. (something like 128x128 is my aim)

Here is my first hour or so of sketching and working in illustrator. These are far from polished, just blocking for a general feel. The first one I'm working on is 'Bury my shell at wonded knee' which is a train / western level. Where you're on a runaway train, battling the foote. It's got a chug-a-lug soundtrack to it, its fun bright but very west. I want to show motion in this icon somehow. I want to also keep it as basic as possible.

One issue I've come across so far is my color palette. Because I'm playing so heavily off mood of the level, I believe I'll be changing my palette for each icon / stage. This isn't really an issue, but might create inconsistency. So that means I'll have to get consistent in a different field, to make sure they all feel the same.

Heres the very much wip so far - 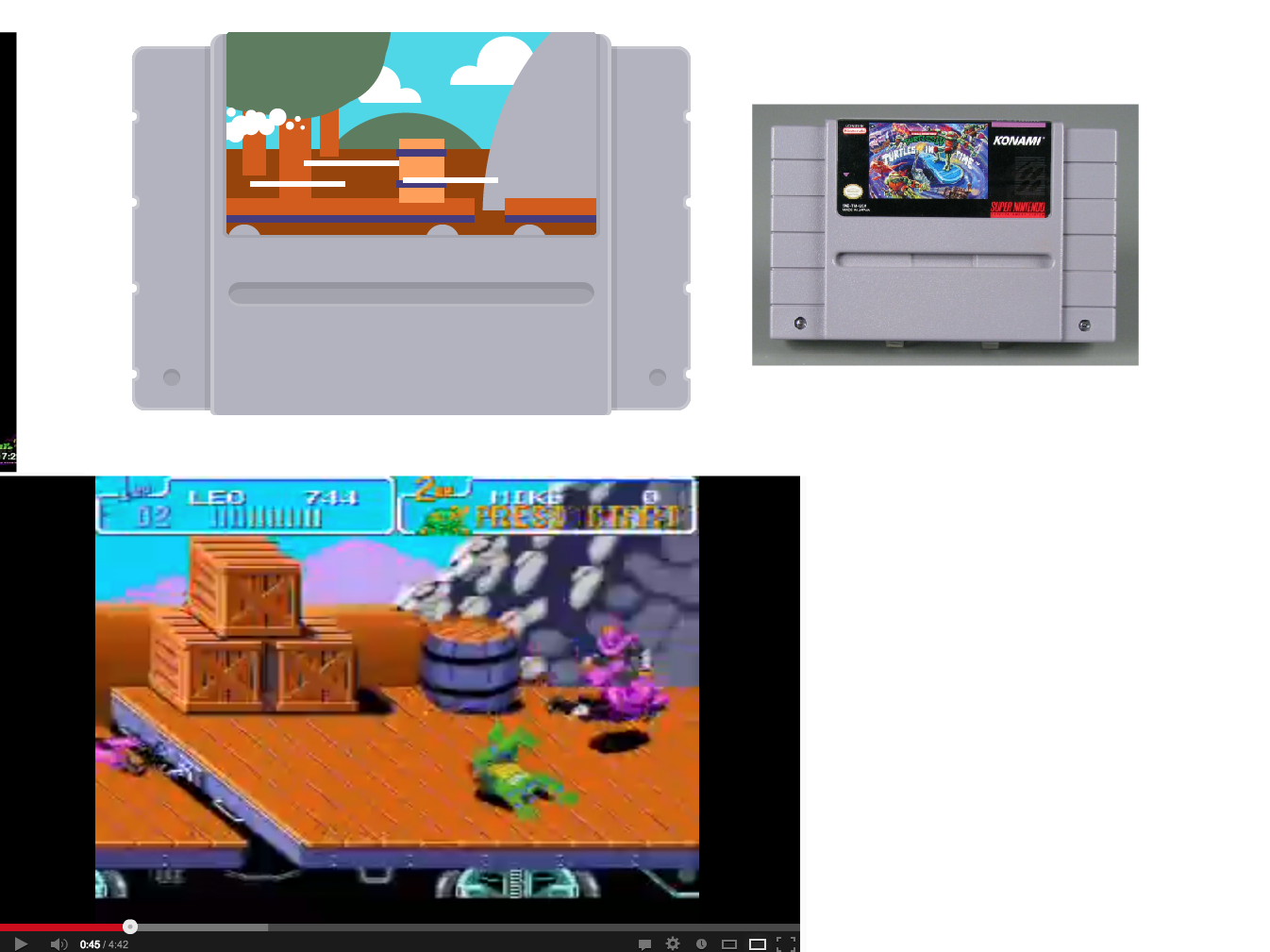 Some sketches to get an idea of what will fit. 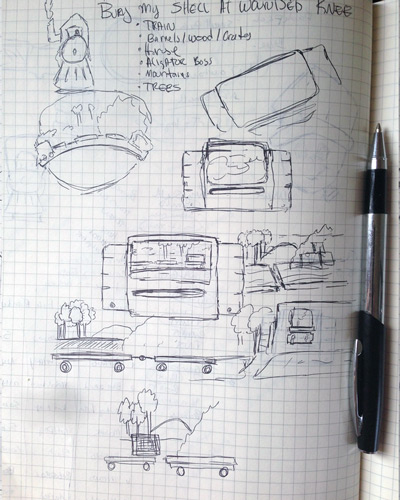 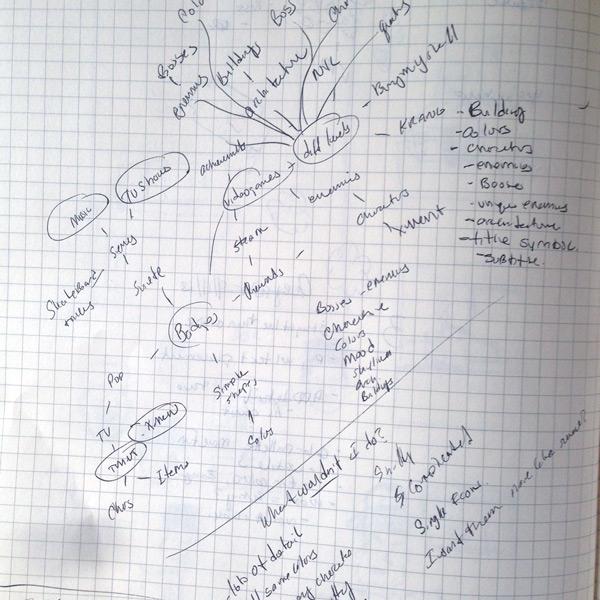 I began to break it down to see what has the best commonground between all the levels. Would it be good to choose an enemy from each level? an boss? the scenery? I ended up deciding that the scenery is the best to go with for now because it is the most descriptive and has a lot of effort put into it from the game designers. It's color heavy giving off an immediate mood. Simple, fun, and shape-like. 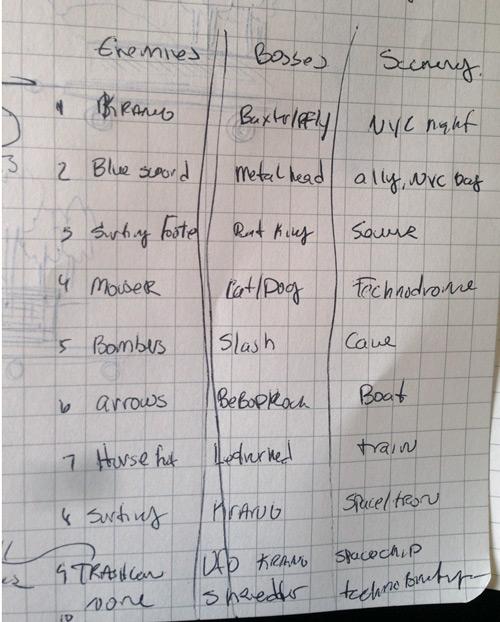