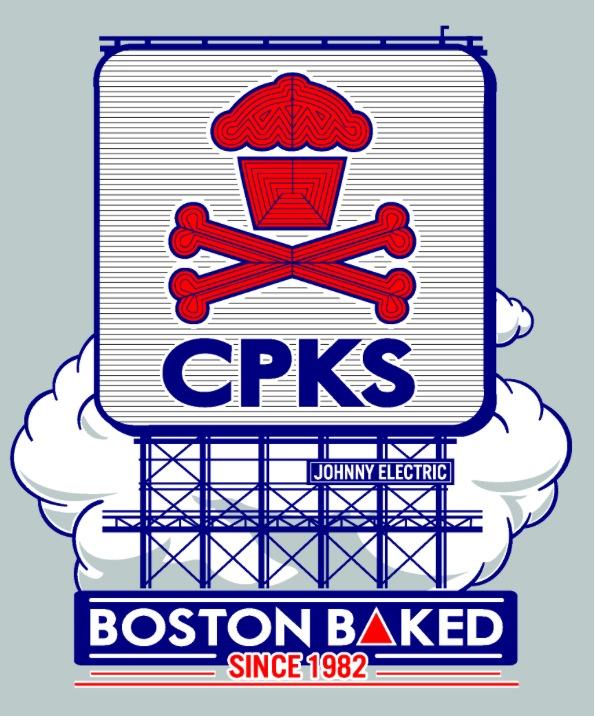 Since completing my Johnny Cupcakes Dinosaur Shirt design I couldn't seem to get cupcakes off my brain, so I decided to finish up some of the other ideas I had from my original brainstorming for this shirt. One was to pay tribute to the brand's Boston roots and replace the iconic Citgo sign that has become a landmark in the city with the Cupcakes Logo and even replacing the smaller "Foley Electric" Sign with "Johnny Electric". The second design is homage to my favorite "Cook" Breaking Bad's Walter White. With the series finale coming up this summer and all the cooking and baking puns it allows for it seemed fitting for a Big Kid makeover. Let me know what you guys think and keep up the good work! 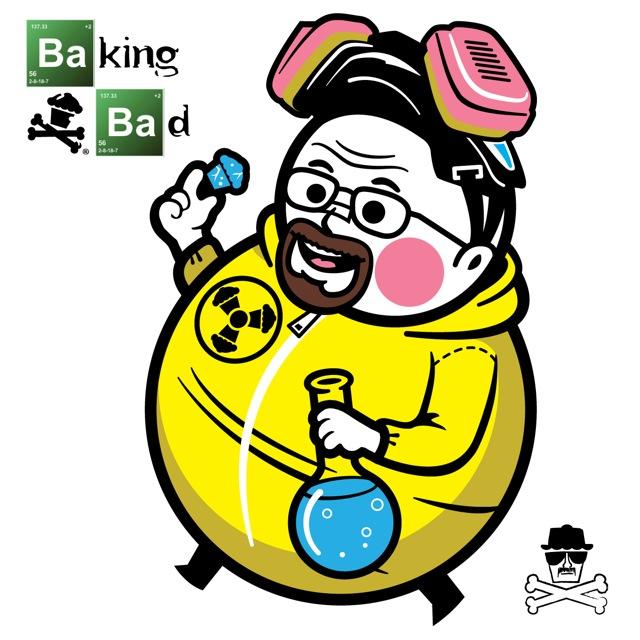 Here's the latest version of my design! I think I found a more harmonious color palette, a better shirt color, and that "happy place" between both the black and white and color versions. Let me know what you all think, all your comments have been so helpful. Thanks again! 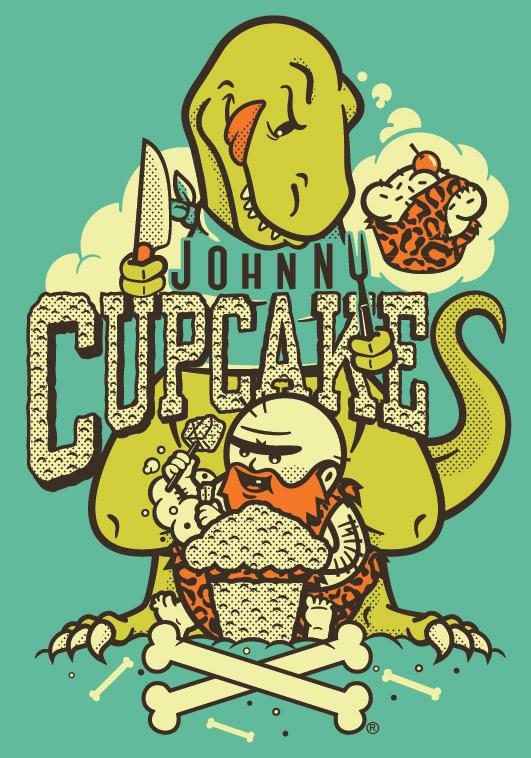 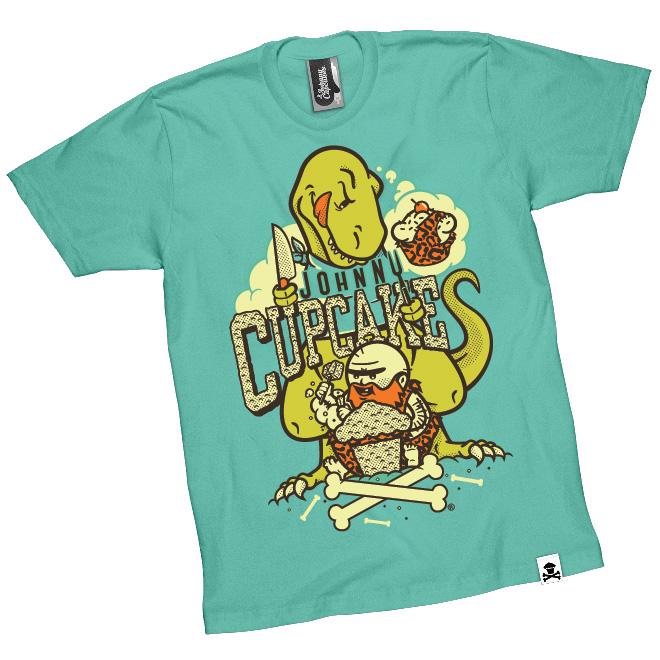 Thank you all for the feedback, it was so helpful for making changes and I really like where the design is right now. I think switching it back to black and white helps the overall design read and allows you to focus more on the details of the scene. Let me know what you think and thanks again! 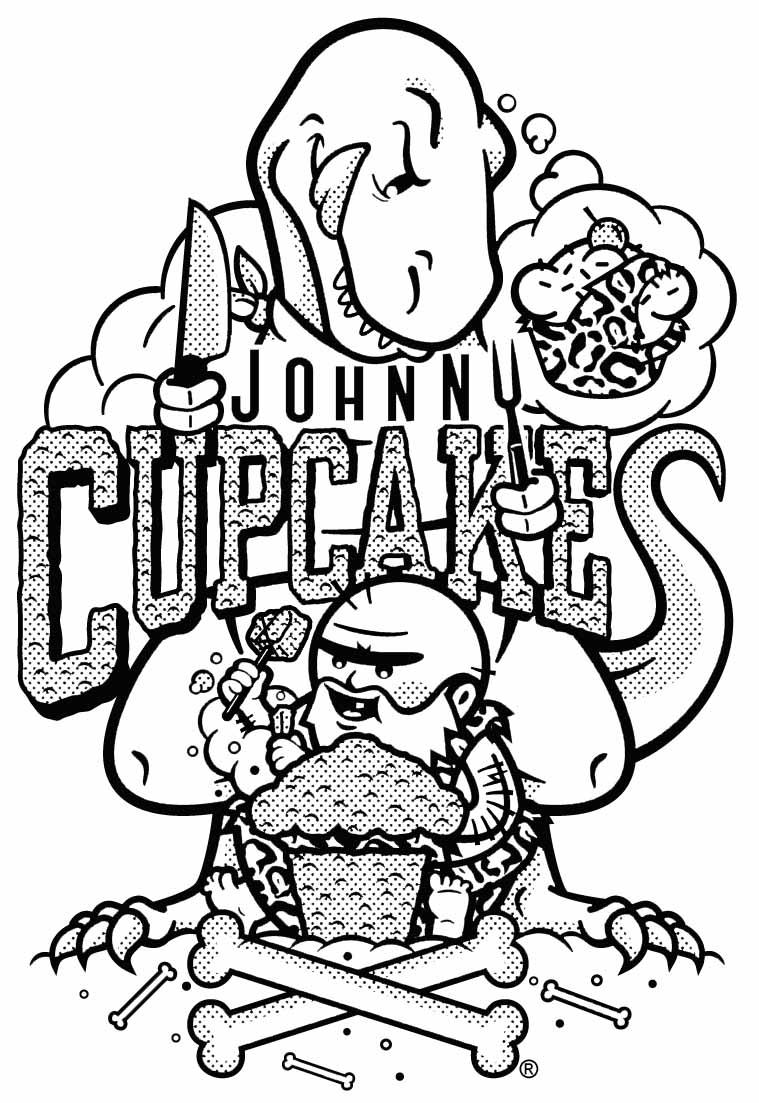 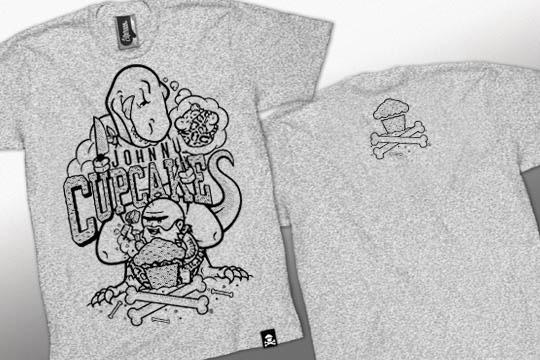 Hey guys, here's an updated version fresh off a bus to NYC on my way to the Boston for the weekend. I made the green darker, the rocks rougher, and the text clearer. Let me know what you think. 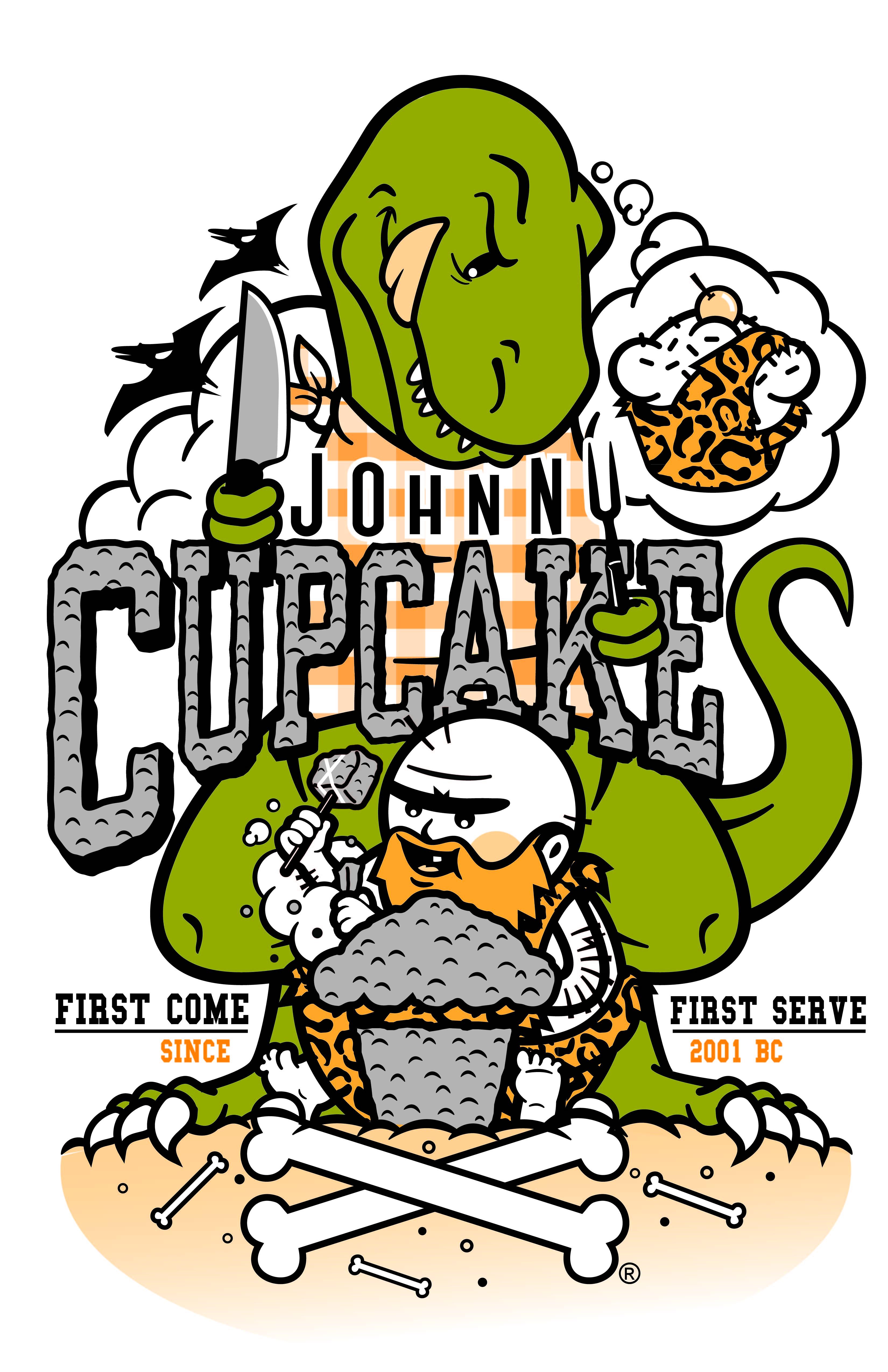 Vectors in Progress: Here is what the design is currently looking like in vector form. I still need to roughen up the lines of the text and the stone cupcake similar to those of the finished hammer. I'm also looking into how the hands connect to the body (more arm would be visible behind the text) and the size of the checkered bib, along with other picky details (like toning down the green). I also plan on including a catch phrase and am leaning towards "First Come, First Served" referring to Dinosaurs coming before man and thus being able to eat them, although "Reinventing the Meal" is a close second... Everyone's producing some killer work and I've really enjoyed watching everyone's progress, so let me know what you think and thanks again for all the feedback! 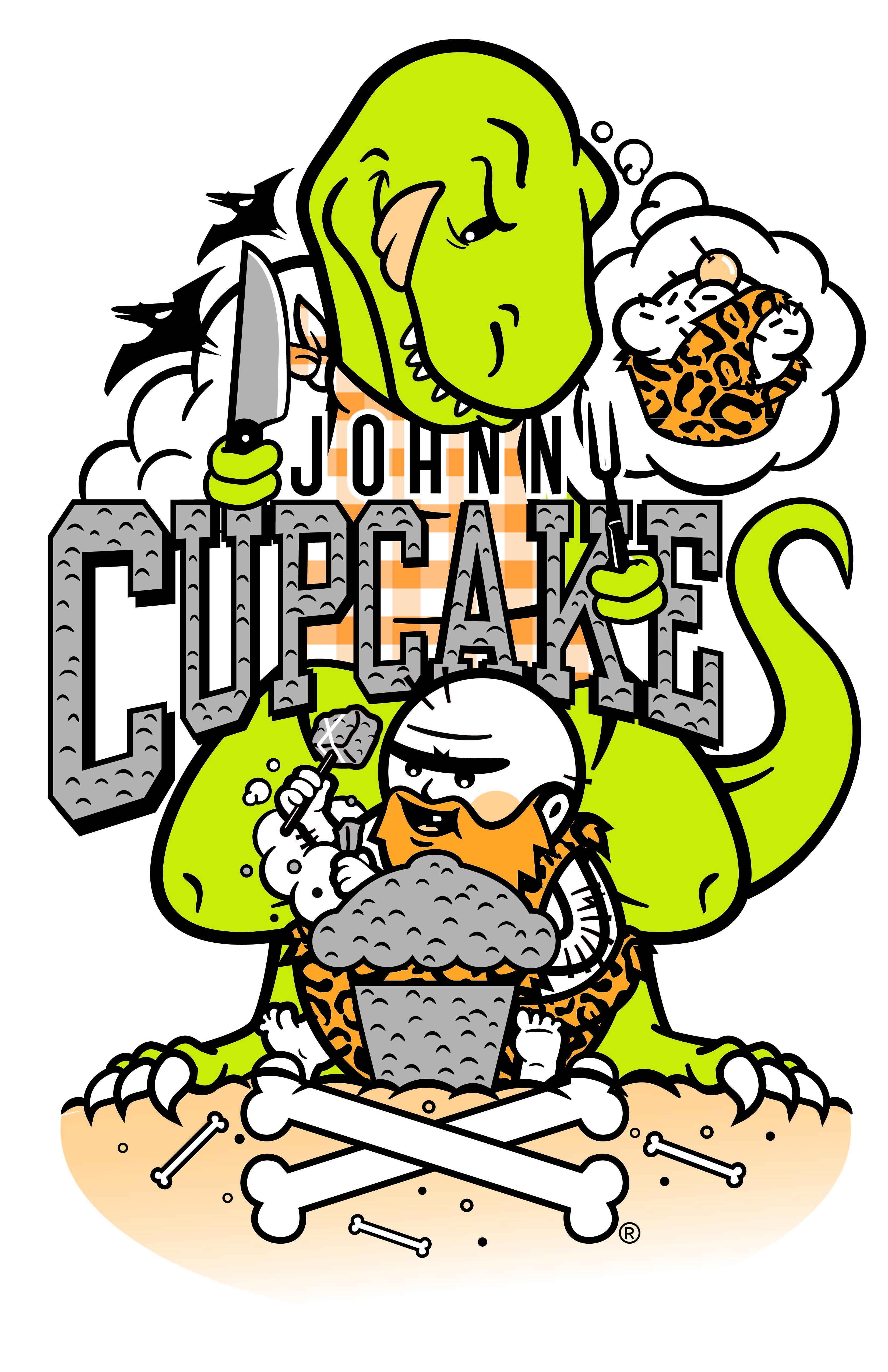 Sketch in Progress: I still haven't yet added "Johnny" between the fork and knife and extended the T-rex neck to make it fit, so that's my next step. I also plan on adding the animal print pattern to the fur and the checkered bib in illustrator. Let me know what are other areas that can be improved, Thanks! 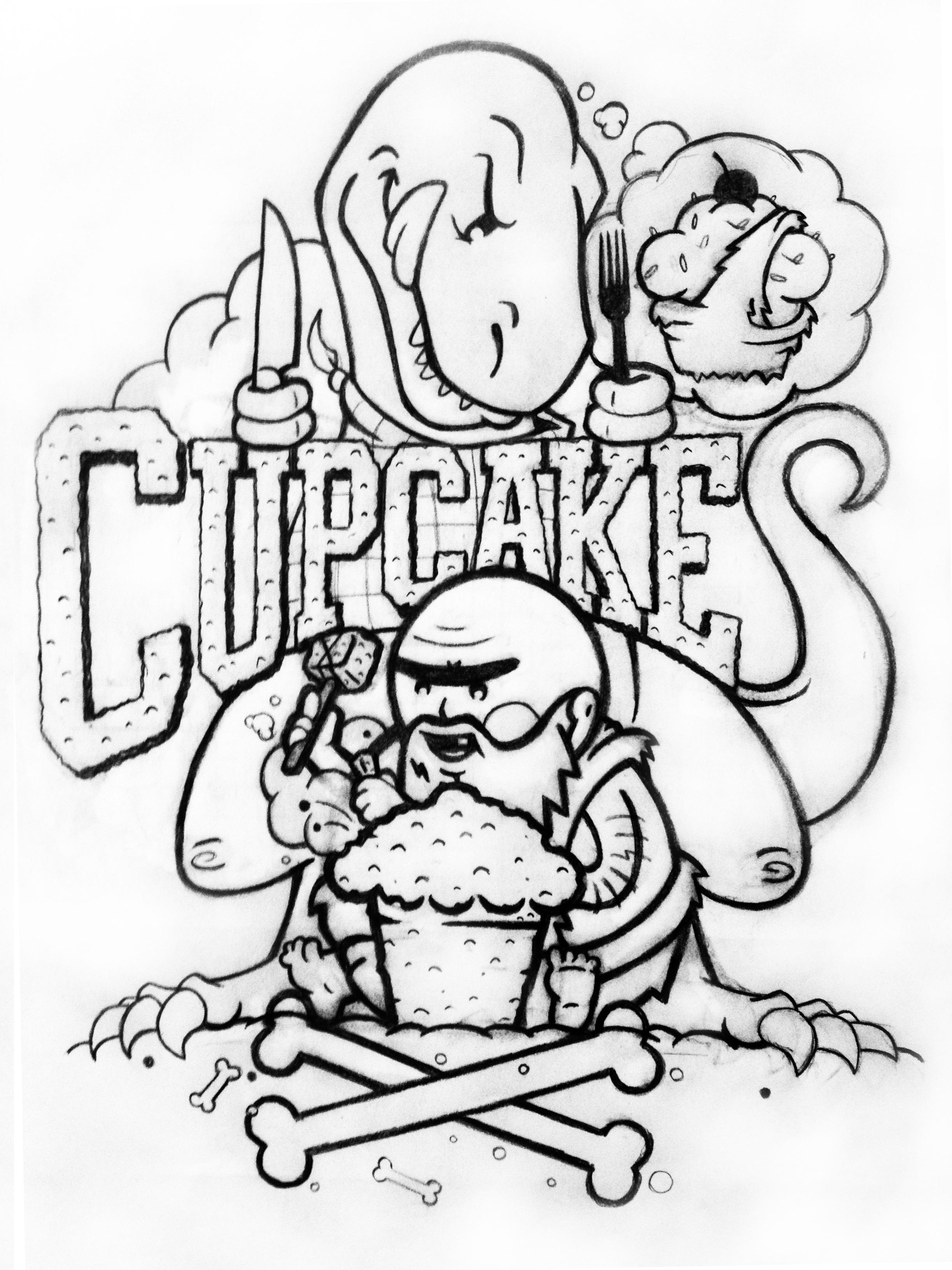 Sketch in Progress: I reworked the caveman to make him true to the Big Kid look and am still working on his bare feet. I also am still working on the text and plan on adding "Johnny" between the fork and knife and extending the T-Rex's neck longer. More to come later today... 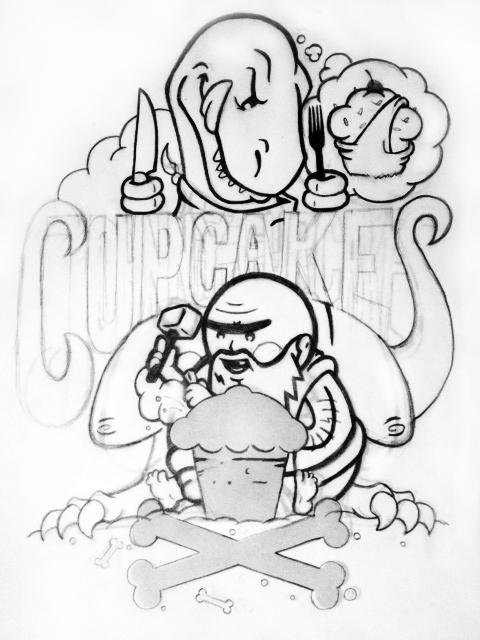 I have been closely following the Johnny Cupcakes brand for a while now and owning the shirts and attending the lectures has given me a very strong understanding of what the brand is all about. For this project I wanted my research to be more about "What does the brand look like and how does its unique design style reinforce the overall message?" There's a massive variety of designs for Johnny Cupcakes, but as different as they are they all seem to work together as an overall collection under the same brand. If I wanted a shot at my design fitting in with this family I wanted to look at how each aspect of my design would be illustrated in the Johnny Cupcakes style. So I created a Johnny Cupcakes Graphic Swatch Board (!) for each aspect in my sketch. 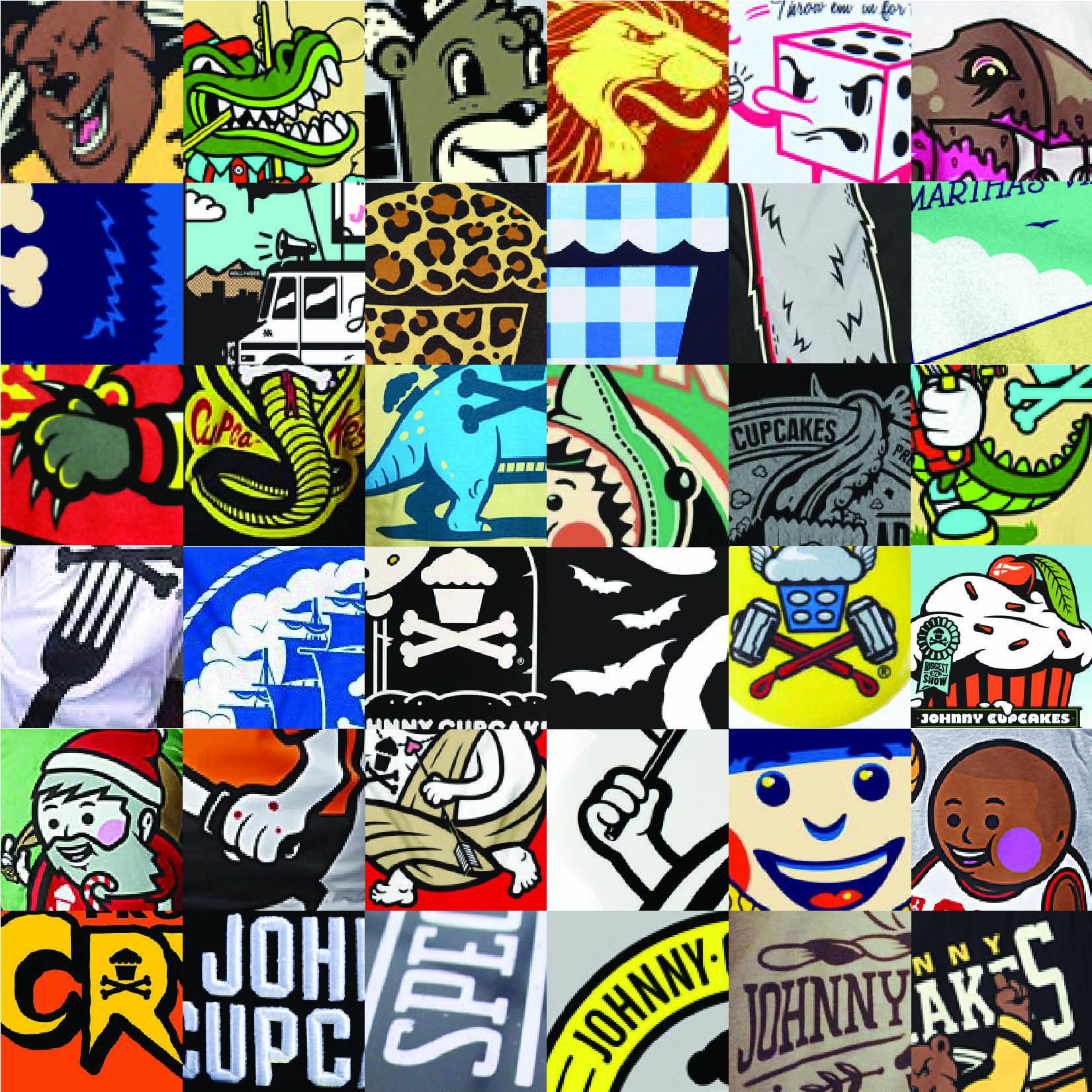 The first row looks at eye styles, spefically angry eyes, for the T-Rex

The second row is patterns, from fur to clouds to the classic JC blue gingham for the dino's bib.

The third row is ideas on how the teeth, claws, and textures of the body might look... you know dinosaur stuff.

The fourth row is objects in the sketch, many which can be found in existing designs, the fork, the stone, the hammer, and everybody's dream cupcake (sigh).

The fifth row was a big one (ha!), but seriously I knew it was important. I sketched the caveman Big Kid from memory and as a symbol of Johnny Cupcakes its important he stays true to his existing anatomy. To do this I had to dig though all of his various personalities and find examples of what he would look like with a beard, bald, bare foot, and even holding a hammer by looking at individual pieces of multiple designs.

The sixth row is fonts, everything from overall layout to rough stone like type.

I learned so much from doing this excercise and know how helpful it will be in moving my design forward for such an iconic brand. Keep up the great work guys.

Thank you everyone for all the positive feedback and comments it really means a lot to me! I'm so motivated to keep developing my brand and pushing my designs to the final shirt phase now. Seeing all of your work and especially your original designs for the Johnny Cupcakes brand has inspired me to do the same for this class. I first met Johnny in Martha's Vineyard when the now permanent MV shop was at that time just a pop-up for a couple days and I'll never forget how the designs, fans, and the man himself really inspired me. I essentially owe this whole part of my life to that experience and see this class as a huge opportunity to design for the brand that started it all for me.

The Johnny Cupcakes brand is centered around childhood nostalgia and iconography from our past and to me nothing embodies my childhood more than dinosaurs (surprise!) and I feel like its a perfect fit. So, with this design I wanted to capture the classic "caveman chiseling the wheel" with a Cupcakes twist. The scene itself shows one of the earliest moments of creativity and design and who better to "reinvent the wheel" than the JC Big Kid. Also there's a play on the the tongues showing both lip-licking hunger and intense focus while designing, both very familiar emotions to those in the design community. So here is the first sketch of my idea, let me know what you guys think! 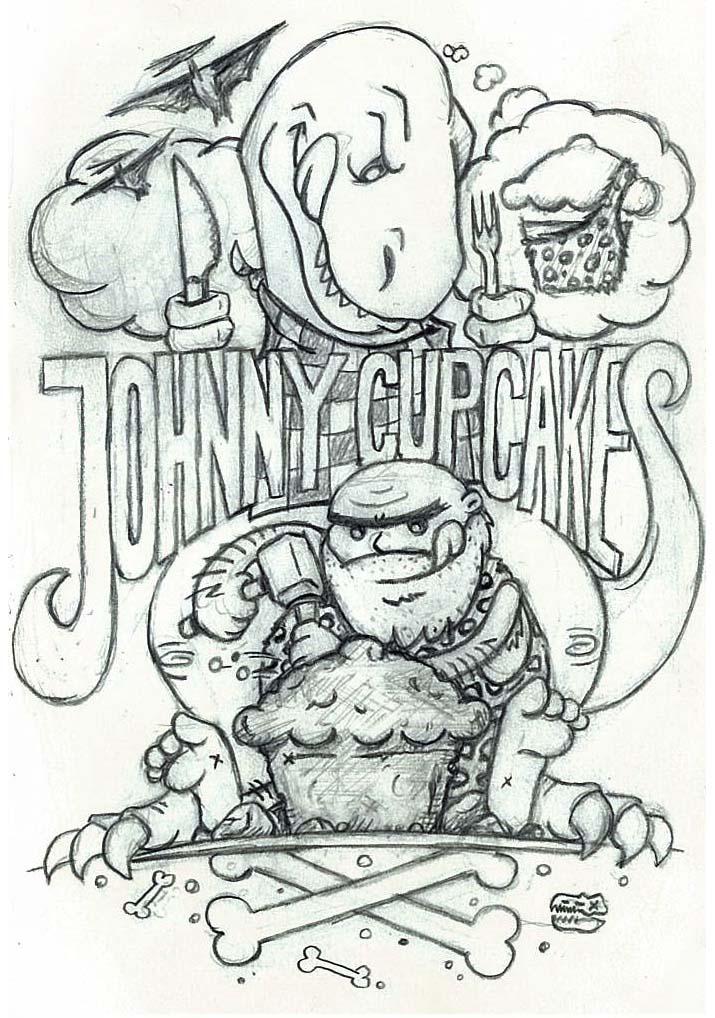 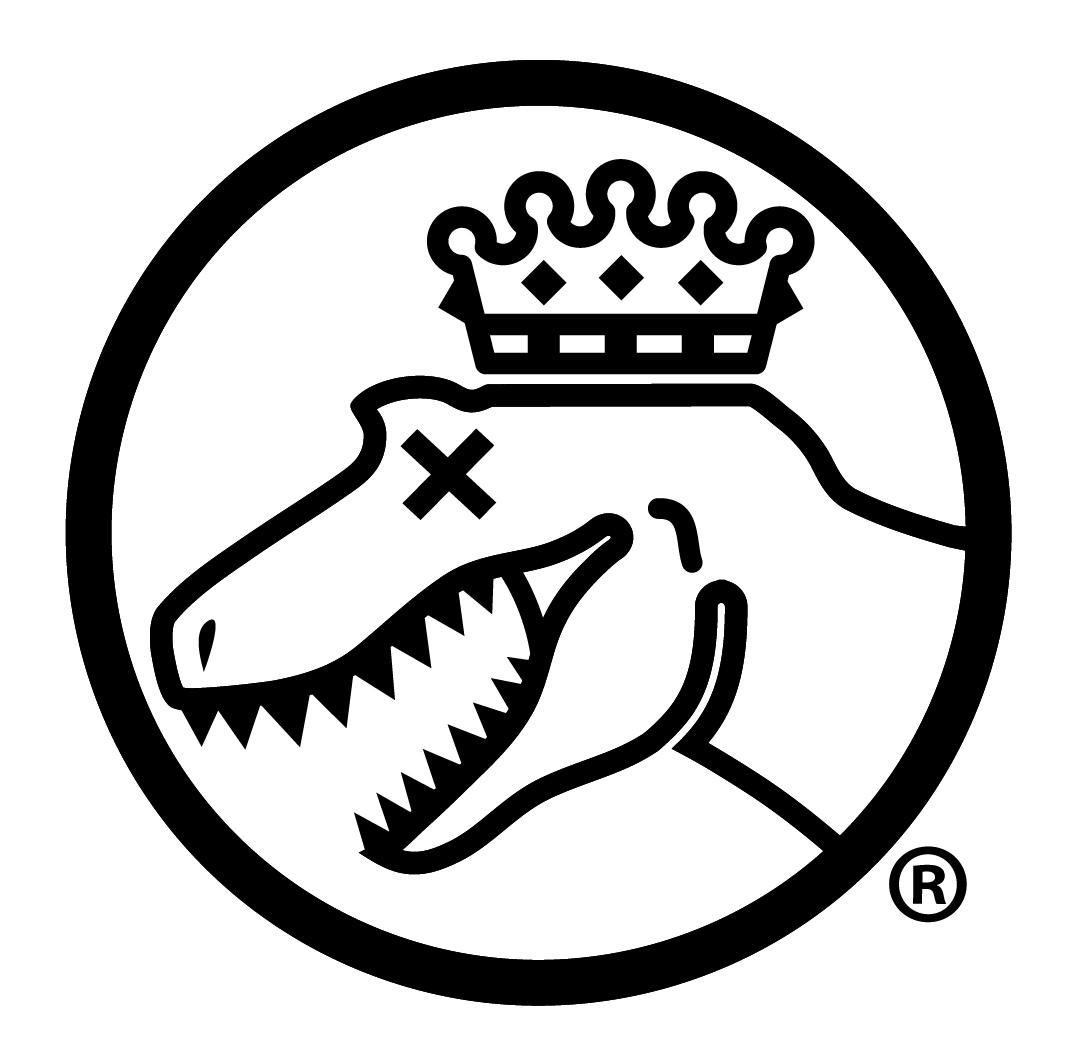 My name is John DeNapoli and I am so incredibly thrilled for this opportunity to work with all of you! Just like all of our favorite professor here I too am a Syracuse Alum hailing from the cupcake covered city of Boston, however, I currently find myself on a bit of a "creative spiritual journey" that has me working as an architect in DC. The second I clock out though, I find myself racing to my laptop to use all the Adobe tricks that an Architecture degree will teach you in order to vectorize the day's dinosaur sketch (a sideffect of a prehistoric-specific doodling disease I've suffered from since my youth) and ultimately turn them into a t-shirts! I first got a taste for printing shirts at college where I would whip up a batch of rude humored orange shirts poking fun at whoever our basketball opponent of the week was. This was also the first time I tasted the lawful hammer of copyright infringement (haha...oops) and was told by some pretty important people to stop taking the school's name in vain and shut it down. After that I decided it was time to do something all my own, and like most great things in this world TEEREX was conceived in the backseat of an old Ford Explorer by a twenty something year old. TEEREX (logo above) is my own original brand with original designs, a creative combination of the exisitng love I had for all things Jurassic and my newfound love for branding and shirt design. Oh, and an unwavering sense "Dad Humor" and puns (even its very name couldn't escape). Although only a few of my designs have reached thier final resting place amongst a cotton clad torso ideas keep on coming and I can't wait for this class to bring some old sketches to life from the brink of extinction. "Evolve or Die" my friends. Here are a few pieces I've made: 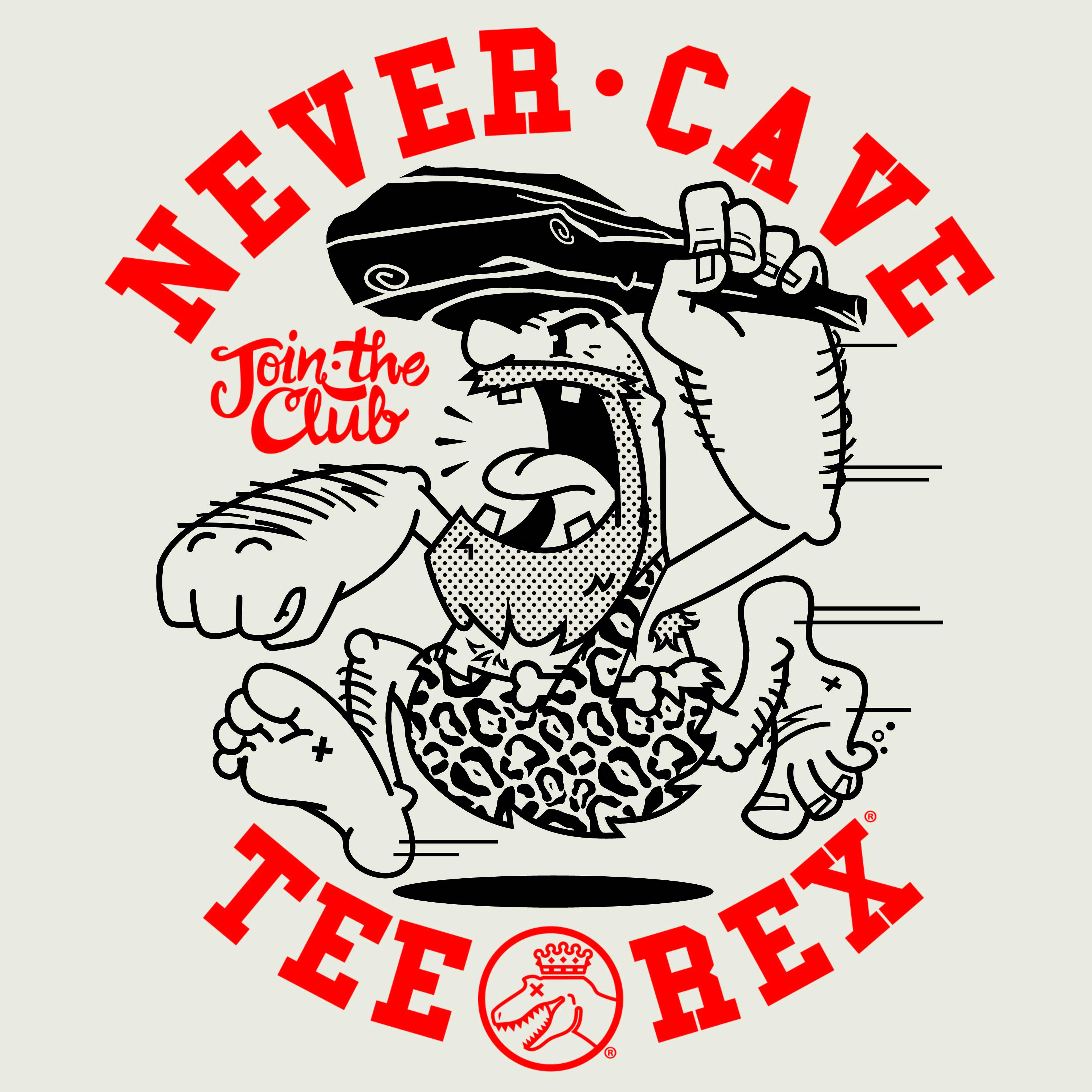 "Never Cave" is a slogan I came up with as one of the messages of TEEREX. It's a call to be unwavering and unique, but also a pun never taking itself too seriously. 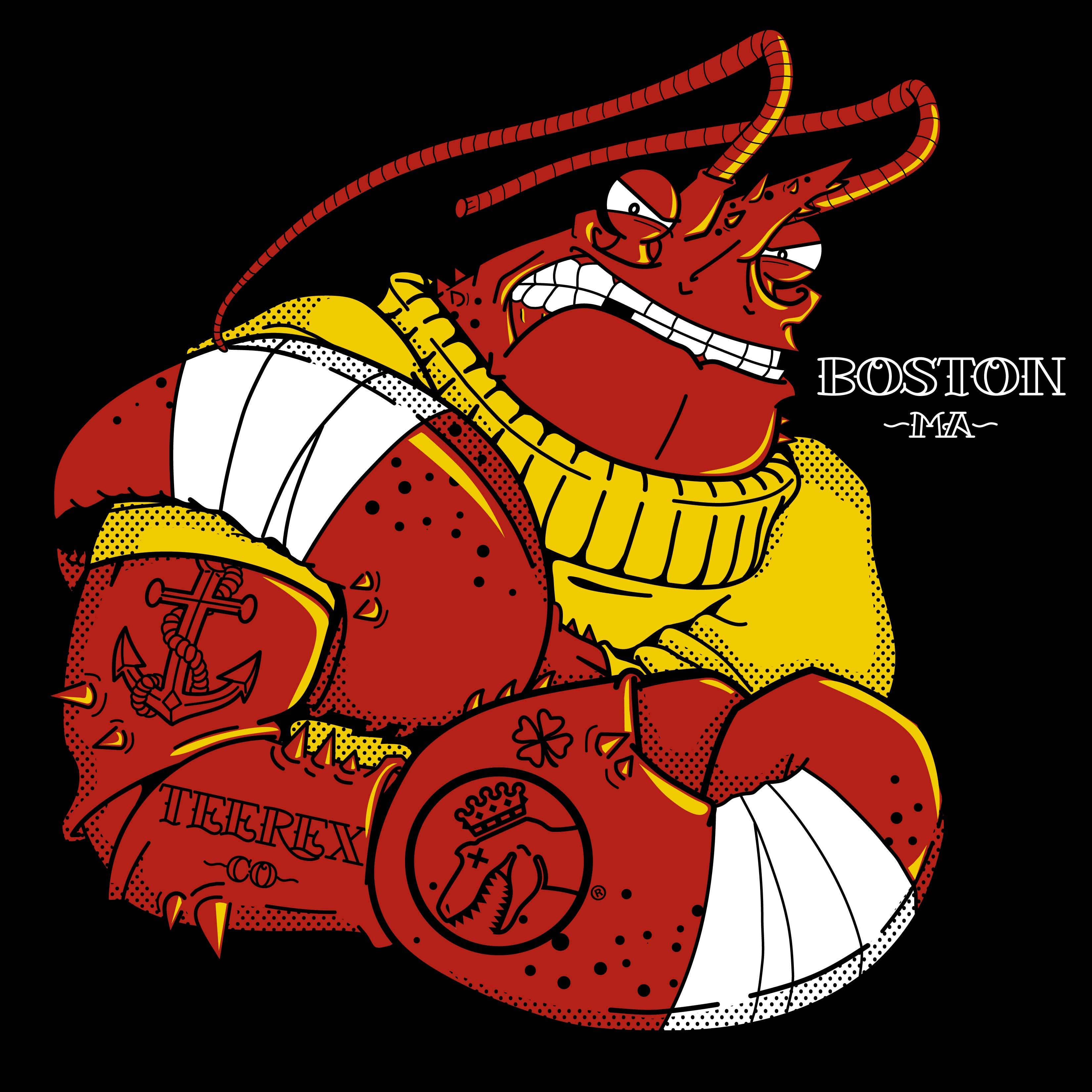 The Boxin' Lobsta': No matter where I live Boston will always be my home, lobster will always be my favorite meal, and I will always feel like I could win in a fight because I can recite most of the lines from "The Departed"... I think this image encapsulates all that.

I'm really hoping to learn a lot about all aspects of successful shirt design as they're all still new to me, but will be paying close attention to typography as its something I'm only beginning to play with.

Thanks guys, big fan of all your stuff already.