A TALL MAN (50) walks from a distance across the street and waits by the traffic light.

The wind blows. The TALL MAN’s jacket moves to the side exposing a gun belt with a handgun.

It is a hot summer day. The sun is blazing. We ZOOM down from the sky and hit an empty street. In the long distance we hear the buzzing sound of the city centre.

The sound stops. On the sidewalk across the street we see a TALL MAN (50) approaching. He walks slowly and stops next to the traffic light.

He is totally emotionless. He is well dressed, wearing a light blue suit, white shirt, brown shoes and sunglasses.

CLOSE UP to his face. Drops of sweat are covering his forehead. He is looking straight forward to us. Dead quiet and serious. Like on a mission.

We CUT TO the street again and it is still empty. No cars passing by. Traffic light turns green.

We CUT TO the sidewalk and see the TALL MAN. Without checking left or right, he starts crossing the street in slow motion. As he reaches the middle of the street the wind blows his jacket.

We CUT TO a medium shot and see that the TALL MAN wears a belt with a gun. As he walks to us, cars start passing by behind him - blurred and in slow motion.

TALL GUY keeps walking. CLOSE UP to his motionless face.

FADE IN to a hot blazing sun. We hear the distant noise of traffic outside the frame. ZOOM down from the sky and hit an empty street. CLOSE UP to traffic lights that are red for pedestrians.

WIDE SHOT of grey and light brown buildings around the street. MEDIUM SHOTS  of closed windows and buzzing A/C units. Nobody is in sight behind closed curtains.

Looking down the street from a window we see the figure of a TALL MAN (50) walking on the sidewalk. CUT TO another window view we see the walking TALL MAN (50) from another angle. This time we can hear his footsteps.

On the ground level we look from one side of the street the TALL MAN (50) approaching. He wears a light blue suit, white shirt and light brown shoes. Big sunglasses. His outfit is formal as if he dressed for a wedding ceremony.

CUT TO a medium shot of the TALL MAN (50) stopping by the traffic light. He is looking straight in front of him. CLOSE UP to his face, sweat dripping over his forehead. He is totally emotionless.

TALL MAN starts walking in slow motion. In the background we barely start hearing a monotonous violin chord. As the TALL MAN slowly moves towards us the music turns higher.

CUT TO a medium shot of TALL MAN approaching. Cars start passing by behind him. We see them blurred out. The wind blows. TALL MAN’s jacket moves up and down. We see he’s wearing a gun belt with a handgun.

FADE IN to an open window. The wind moves the curtains. Slowly ZOOM OUT. HIGH ANGLE SHOT of the street. TALL MAN lies down in a pool of blood. Medics and policemen around his dead body. 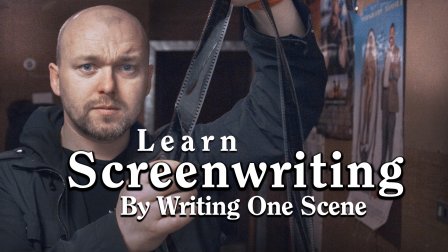