I chose to use an A5 sketchbook; this was because I wanted to expand this particular sketchbook. I soon found I couldn’t really fit six images on the page, but I wanted to do more than four so I ended up creating eight images per experiment, across two pages.

I had an initial bias towards fine liners, also believing they were the way to perfect line art. I tried to stay away from pencil because it’s my usual go-to. However, I found that I preferred the pencil drawing to the pen drawings and I especially didn’t like the drawings with thick black lines.

I used a bit of colour, starting with warm tones (red) but preferring the cooler tones (blue). I really enjoyed painting with watercolour, but I lack experience with a brush and felt like I didn’t have enough control. I’d really like to learn more though.

I loved this experiment much more than I thought I would! I used a mixture of materials and tried a variety of shapes. I found I much preferred the unsymmetrical bugs, and really liked the rounded squares. I don’t like the shape of #3; it feels overall too jagged and sharp. My favourite bugs are #4 and #8.

I had a bias towards the classical black and red colours and didn’t stray too far from this. I like the flat colour of the marker pens with #2 and #3 but didn’t like the black outlines (especially on #3 which looked far better before I added them!) I prefer the bugs without white gaps. Again, I had a preconception that the pencil colour would look childish but again I kind of preferred it! I don’t really like the faded colour of the watercolour pencils.

I was uncomfortable at the start of this experiment as I’ve always been a fan of outlines and connecting shapes, the thought of space kind of scared me. First I tried just colouring the background, and I was surprised to find I quite liked it. Then I tried a few variations of non-connecting shapes with space (#2 and #4) but I hated these. They didn’t look as though they made sense to me.

I much preferred all the experiments on the second page and I think #5 and #7 were my favourites. I loved the white space in the wings of #5 and was surprised I liked the spaces in the body. I liked the outline around the whole fly in #7. It didn’t feel too overbearing, probably because of the lighter colour.

As in the first experiment, I really enjoyed watercolour and really felt that bias in this experiment. Yet, still, I didn’t have enough control over the brush so wasn’t able to add finer details that I wanted. I preferred the control I had with the coloured pencils so really gave them a go, despite my aversion to them. Ironically, I ended up hating my watercolour butterflies because they ended up looking childish and unprofessional, which is what I thought was going to happen with the pencils.

I had a general bias for darker colours but really liked the lighter coloured butterflies. I really enjoyed layering colours on top of each other to create a textured look and add depth.

I had a lot of fun with these experiments and realised that I much prefer colour and shape to black outlines (which I previously used all the time!) I stuck with one medium (coloured pencils) to try and really focus on the colour. I much preferred the cooler colour palettes and especially loved the pastel #3. I really enjoyed layering colour on top of the white pencil to add texture & detail. I really didn’t like #5, I tried adding detail to the wings, but the black colour was too dark and made the drawing look muddy. My favourite was probably the last firefly with the rainbow wings, probably because of the contrast. I think the mix of white pencil and colours makes the wings look free-flowing.

I found this experiment difficult to comprehend. I was worried about creating texture with my limited materials, but I enjoyed it a lot more than I anticipated. Following the previous experiments, I really went for it with the coloured pencils and I think they worked really well to create a fuzzy bee! In some of the experiments, I incorporated paint and pen but didn’t like these bees as much.

I didn’t like #2 due to the thick black lines. I hated #3, I tried something new with the gold pen, but it was too thick. I liked #4, probably because of the contrast with the white wings. #5 turned out to be one of my favourites. I had a bias towards the classic black and yellow bee but the brown worked really well to show the texture. With #6, I started with a white pencil then coloured on top. I used brown around the edges to add depth and then added the black. This is probably my favourite bee!

Overall, I really loved these experiments and I'll definitely be doing them again in the future. I'll be recommending this course to my artist friends, beginner or expert! 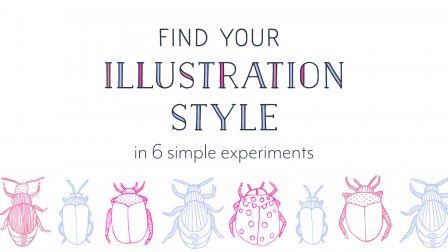