After MANY hours I've finally finished my sticker set! This was such an educational and fun process. I couldn't stop working on them :)

I decided to show a few stickers from sketch, to final rendered illustration. Here are some sketches that I started out with...

These sketches were done with plain ol' pencil and paper in one of my sketchbooks. I had already created these characters because I keep a daily journal and draw myself, my boyfriend and our dog. So when I sat down to sketch out the sticker ideas I thought of common expressions we use and phrases we say. I also looked at which emoji's I use/like the most and created my character with those expressions. For some of the expressions I had to ask my boyfriend what my face looked like when I said a certain phrases. I even looked in the mirror to try and get the right eyes/mouth. I don't put noses on my characters, in case you were wondering what happened to them :)

After I had narrowed down my ideas to a reasonable amount, I took photos of them on my iphone and sent them to my mac. From there I followed the steps of using Photoshop and Illustrator to create my stickers!

Here are the final versions of these ones! After drawing the outlines, filling in the colors and adding text to some of them.

At first I was REALLY slow in outlining and coloring each one. The more I did, the faster I got. The little tips and tricks from this class really helped out a lot! I found that creating custom swatches and putting them in folders really sped up my process. Using my Wacom Intuos tablet with shortcuts of my most used functions/tools also made things more streamlined. I made a total of 32 stickers!

Here are a few more of my favorites from my sticker set...

There is this Spongebob meme that I always use and during my process I thought, "I should totally do one for that!" So I did...hehe

I enjoyed this class so much, Mimi! I can't wait for the next one, I look forward to putting my stickers in the app store. Thank you again, you're an illustration genius! 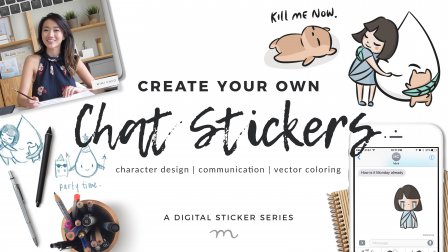