I decided to draw a face with a lot more expression, it was wolverine or joker, but i thought it would be harder to do wolverine because of the small facial hair. i mostly finished drawing off with inks without really completing the pencils part. also thought id mention the hair coming out his right shoulder was supposed to be a cast shadow of his hair against a wall. i think if i drew the torso it would've came off clearer. but here are the results and please dont hold back on critiquing it! thanks!!hThis is after a week of drawing heads everyday. i tried to make captain america head and really wanted to challenge myself with the mask part of the course. i was able to understand the changes david made to my pervious head, that alone really helped me out to understand the basic form even more. but all that being said i took a random shot at drawing in the shadows. Im note sure if its correct?  i also decide to add rendering in random parts of the drawing, i also dont know if that was the right move to make. So i took took my pencils into clip studio and tested it out there, and these are the results! After rewatching some of the videos, i tried to put together a different pose, that way i wasn't just copying what was in front of me. i wanted to try and challenge myself and make the same head but slightly rotated in a different direction. i changed a few things up with the hair, other than that i wanted to keep the shadows the same. the things i struggled with, was not knowing when to stop. after finishing the drawing i felt like i wasn't satisfied so i extended the chin and neck out for no reason and ended up making it look awkward. but with some advice i turned it back to the shape it was before. i also feel like the ear might be small on this one too?
Here is my first attempt at drawing the complete head after going through the videos. while i was drawing this, i had made a lot of mistakes and ended up moving things around more than i should have. im going to go rewatch and try everything again and maybe do a different pose this time. 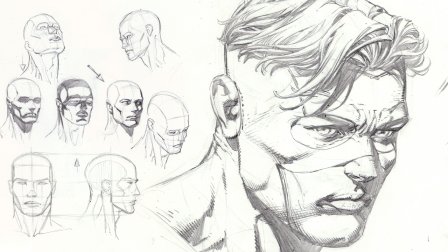