Hi Everyone, A little late in the game but hope that I can participate and entertain on the way.

My three ideas are -

Idea 01-
Safari rumble
On a safari with my girlfriend, Abi (now wife) in Sri Lanka. So excited to go on a safari after seeing so many wildlife documentaries on TV, I was now living it!
We set off in a jeep with another family, the ranger and driver. I have my camera out and already taking lots of photos of everthing we pass.
When suddenly, I feel a rumble from down below. I couldn't believe it I needed to the toilet! The ranger starts pointing out cool things we see outside of the Jeep. "If you look ahead, you will see a dead carcus hanging from the tree.."
Everyone goes wow! I turn to Abi and say, I think I need the toilet. We continue driving through the park and it gets worse. I'm going to have to go really soon. I ask the driver, "is there any toilets. He asks, "no 1 or no.2? I reply , "no.2". He laughs.
I'm left wondering what I am going to do!?We continue driving and suddenly there is a giant snake on the ground! Everybody moves to the side of the Jeep it is closest too but I just can't move or enjoy the moment. I had to go soon.

We come to an army camp in the middle of the safari. The ranger tells me to get out. I look over and the camp has army men with big guns guarding the entrance! The ranger walks me up to the entrance and speaks to the armyman. No expression from the officer as he leads me in leaving the ranger outside the camp.
As soon as I enter, everything else goes silent around me. I look around and eyes are following me as I am directed to an outside toilet. The armyman points and I go in.
Finally I can relieve myself, even if it was in a scary unknown place, eerily quiet with soldiers with massive guns just outside the door!

Idea 02-
Playing Jimi to the playground
My fellow school friends and I thought that one lunch time it would be good idea to play loud music to the playground one lunchtime.
So we lugged our heavy equipment from our tiny practice room through the school corridors into one of the English teachers' rooms.
The one with the best view to the playground.
We locked the door behind us and continued to set up our equipment. This is going to be amazing, we said to ourselves. We plugged everything in and opened wide the windows.
Jimi Hendrix's All Along The Watchtower seemed to be good song to play we thought.
We started rocking out, my friend did the solo on his guitar and the children came to listen from down below in the playground.
For a minute it felt like we were playing our very own stadium gig!
Until, oh yeah is this a good idea?? We could see teachers starting to come from afar so we packed up and escaped a narrow getaway!

Idea 03 -
Summer roll
For sometime my wife and I felt that our daughter, Summer, was about to roll over for the first time. For a few weeks it felt like she was trying but just not getting it.
We had put her down on her play mat when suddenly, we both looked at each and said. Look! it looks like she might do it this time!
I get my phone camera ready and hit record while my wife entices Summer to 'roll'. Aah not this time, I said. and I turn off my video. Then she again looks like she will roll over so I turn on my video aaaand nope. No show.
This happened about two more times until we decided to get on with whatever we were doing at the time. My wife goes out of the room and I turn my head away from Summer.
My wife comes back in the room the same time I look back around and guess what, Summer was finally on her front!!
I get my phone camera video ready again and my wife entices Summer to roll again and she does. I capture it on my phone as the very second roll she has had ever done..not the first.

Thanks! All feedback is much appreciated.

I have decided to go with my number 1 idea. Hopefully trying to keep it simple enough to clear and entertaining.

Here is a snippet of reference for my storyboards and the story paradigm I will use as my guide. 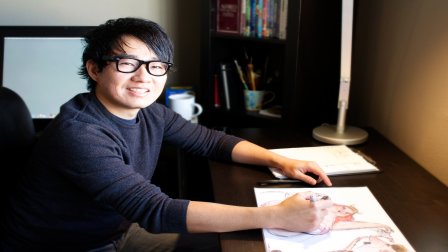