I'm a graphic designer by profession but over the last year have really gotten into photography as a way to expand my creative services. I originally wanted to learn photography to help grow my online menswear magazine by shooting my own content photos. It's steadily morphed into a passion for working with the brands that I talk to and offering them media/creative services shooting products, lifestyle images,  or possibly covering events.

I would say that I'm a clearly still a novice at shooting photography (I wouldn't say that I have a huge portfolio of work that would warrant jobs) but I wanted to look into off camera flash because 1) It's more affordable than it's ever been. 2) I've found that shooting portraits in my current space (which is regretfully my bedroom, proves very hard for natural light portraits. I only tend to get 2 hours of some natural light and it's not very good. I thought that using off camera flash would prove a new challenge and also help me get more dramatic portraits for my magazine and personal brand.

SHOOT NOTES: Since I've only shot a few time with the flashes indoors, I'm trying to take what I learn from the class and apply it to my portraits. Sometimes the photos look ok, but sometimes they're too dark or I feel like I'm getting shadows behind me on the wall. It my just be a space issue in terms of having the flash too close and me too close to the  wall as well. I've tried adjusting the position of the light and learning what works. The wall behind me is NOT white, though I want it to be as dark as possible.

UNFORTUNATELY, I DON'T HAVE A LIGHT METER. I ALSO WISH I COULD SHOOT TETHERED TO CUT DOWN ON THE TIME IT TAKE TO WALK AROUND THINGS, ADJUST AND RESHOOT. I WANTED TO KEEP THE BOARDS IN TO SHOW WHERE I'M TRYING TO REFLECT LIGHT TO A BIT.

Is there a way to get the background darker even though it's an off-white. I assume the only way would be pull out both me (subject) and flash away (keeping the flash close to me so light can fall off quicker)?

Since the space is so limited for these portraits, Is there anyway to kill that shadow gradient that forms to the lower left of all my photos or is the solution just another flash on the background?

Given my settings, is there anyway to lower my flash power and get the same results? I think my flash was overheating because of the high usage for about an hour (I was only using CVS branded batteries) There were plenty of misfires along the way. Is that typical when using OCF for extended periods? Would I be wrong to think shooting more wide open would help with the flash power? I would of course adjust accordingly with my shutter speed and lowering flash power. 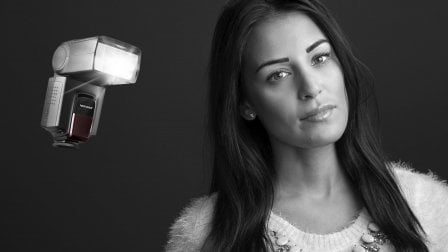