This was a great class that helped my workflow a ton! Here is my process:

Although this is the "ideation" phase, I don't usually sketch too many iterations. Normally, I am fortunate enough to have a pretty vivid idea in my head before starting a project. Any issues I have from translating an idea to paper are small details. In this case, I struggled with where to put the pirate's right arm and what hat he should be wearing.

A note on anatomy: After showing a few people my initial sketch, I was surprised by how many were hung up on the fact that there wouldn't be enough room in the crow's nest for his legs. I was aware of this early on, but I guess I liked the quirky pose that couldn't exist in real life and thought this was a great example of how whimsical illustrations can be. Suggesting reality, not imitating it.

I guess if this were client work and they disagreed, I'd have to work around this. I'm curious what you guys think or how you would handle this?

I've never inked a drawing before. Personally, I thought the sketch turned out better without the inking and since I don't have a great scanner, I knew I would need to adjust levels in Photoshop later. In hindsight, I probably could have skipped this step.

This was a fun, but tedious step. On one hand, you're seeing your idea come to life in a clean render. On the other, I just wanted to get to the next step. I'm pretty impatient.

I haven't really worked with highlights / shadows a lot in my illustrations, so this was great practice. I used the two brushes provided for this and the small details (hair, teeth). I spent quite a lot of time trial-and-error testing this until I got something I liked.

I had a blast pulling everything together, tweaking the colors, and finalizing little textures. I could probably spend hours at this stage alone, so I try to limit the edits and move on to other work.

Had a great time on this illustration. I'll probably do a few more pirates on my own. Let me know what you guys like or don't like! Thank you! 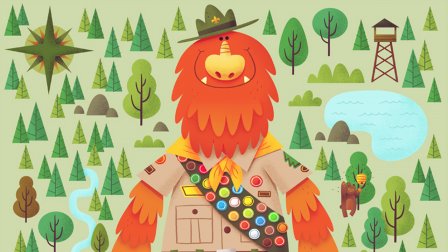