Don't often use biro which is why i chose it for this first piece (plus I have a tendency to be a bit fussy so not being able to erase is good for me! ). I chose to draw a brittle star as I really like the contrast between the organic curves of there limbs and the spikiness of their tiny spines. Think I will finish the detail with the biro for practice and maybe incorporate paint and or ink? Not my least or most favourite at the moment.

I think this piece and the one below work really well together so would like to continue with more pieces along these lines to combine as a bigger piece.  LOVED the smell, texture and colour of the oil pastel and also scraping marks. I've tended towards chalk pastel in the past but the buttery feel to oils really blew me away. Quite like the composition of a blocked in square then mark making within that. I have some water mixable oils in my cupboard which i have very rarely used so will get off my butt and get them out now!

This is my most favourite piece. I first dropped some liquid watercolour centrally then pulled some of the paint out with a thin liner brush. I then realised the blob in the middle would take ages to dry so I blew it with a straw, adding drops of india ink for accents. It reminds me of a lion fish floating through the ocean gracefully, its deadly venomous spikes belying its calm demeanour.  I think it could be a stand alone piece but I'm curious to take it further in a different piece with a background maybe and other fish like creations.

There's something pleasingly Zennish about this one, and although it was unfinished,  it has a sweetness about it somehow? I used a brush pen. I like the composition off to the side too.

I like the dark, grainy swirliness of the charcoal in contrast to the jagged gel pen marks. I sprayed the charcoal with water which gave a pleasing random patterning of the powder.

Not so bothered about this one really. I don't particularly like its central position. It's unfinished but too geometric for my taste.

Like the orange and blue but not much else, the blooms are ok though.

I think I least like this one and the one below. I could continue adding the colour pencil creating a potentially interesting pattern but it really doesn't excite me at all. The one below again does nothing for me although I do like the granulation effect. 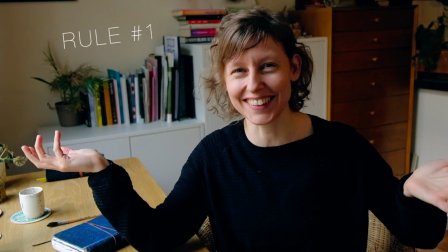