For this piece I wanted to incorporate some of the wildflowers I've seen in Southern California, which is where I live right now. These were based on photos I took at the Antelope Valley Poppy reserve, featuring the iconic poppies, but also miniature lupines, fiddlenecks, purple owl's-clover, and goldfields (I also threw in a few arroyo lupines which were based on photos I took in a totally different location). I would love to do more paintings in the future based on wildflowers on other locations! 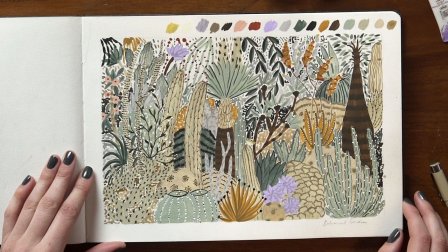