Snail Mail Revolution: One Envelope at a Time

Today was ALL about me some Lucie Duclos! I mentioned my art crush previously and I think she has now transitioned to my muse. I am always so inspired by what she tosses out into the world for others to run with and I am never at a lack of inspiration from any of her lessons.

That being said, I went off the beaten track with my own interpretation of this project and enjoyed every second of it.

The first piece was done using a beautiful paper of Rosemalning (a Norwegian folk art literally translated as "Rose Painting") from a very famous ceramics headquarters my husband and I visited on our vacation in 2018 to Telemark, Norway. They had this paper at the wrapping station free to use to protect and/or gift wrap any ceramics that were purchased (and we might have gotten a thing or two). I went a little overboard with the paper because I JUST HAD TO HAVE THE PAPER! I'm actually not sure what I was most excited about, the ceramics or the abundance of FREE paper.

I thought this project was perfect for this lovely paper and went to town on my envelope. I soon realised you can't have an envelope that beautiful without a matching card, right?!? So, I used up the scraps and made a set muting the design ever so slightly for addressing the envelope with some vintage tracing paper that has yellowed a bit.

Next up was the corner flap envelope using some simple card stock and wrapping paper left overs from Jul (I always keep the wrapping paper from gifts I receive; it has become a bit of a family inside joke). I have really benefitted from Lucie's simplistic style in previous classes and tried to implement that same vibe for this little set.

Finally, I fudged a bit on the larger envelope. I think I shouldn't have trimmed both pieces to match perfectly and just taped the template together as it was. I made mine horizontal instead of vertical and added the idea of a button wrap closure instead of the glue for this one. It needed a bit more weight too, since the paper with white dots was wrapping leftovers so instead of bubble wrap (which I couldn't find for the life of me but I KNOW I have tons of) I opted for corrugated cardboard. (Also later added to the  Rosemalning set which was admittedly a bit thin too). I thought it would be beautiful to incorporate the corrugated cardboard into the design of the final card to tie it all together and I am so glad I did.

I added a little more embellishment to the envelope and matching card as well; some washi tape and a bit of baker's twine, dots made from leftover black paper, and a white heart brad for the closure. In the end, (though I didn't actually get it right on this one), it came out just lovely anyway.

Thanks Lucy, again... for making my day beautiful through art inspiration. This was so much fun I forgot to eat dinner! 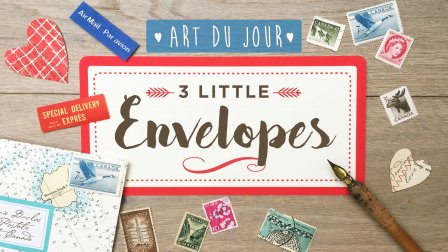