I decided to illustrate a Chinese proverb: If I keep a green bough in my heart, the singing bird will come.

After looking at various whimsical birds and foliage on Pinterest, and doing some rough sketches, I made a careful drawing.

I scanned the drawing and opened it in Affinity Designer to do colour roughing. Although this step was time consuming, I found it helpful. As well as planning colours, I made some changes to the drawing, and used a font to determine the spacing of the text which will be done with calligraphy.

I intended to follow Vanessa's method fairly closely, but without overlapping warm and cool colours, except for a base layer of Naples Yellow which will be under everything except black and white. If you look closely you can see Naples Yellow between the three columns of other colours. It is also under the other colours, and within each column the darker colours are painted over the lighter ones.

I used Winsor and Newton Cotman Cold Pressed 300 gsm watercolour paper, which has some texture, but not as much as Arches Cold Pressed, which would have been too rough for the calligraphy. Writing the text with a pointed pen and black watercolour was the first step. In this image you can also see the base layer of Naples Yellow, and the first orange layer. 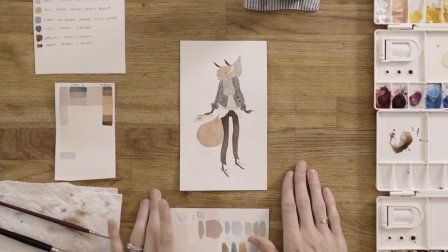