I’m interested in knitting just as a hobby.. A quiet and nice way to spend time. I work with design and hand lettering, so I thought it would be interesting to work manually on something other than drawing.

I couldn’t find wood needles in the local store I went to, so I bought plastic ones. They are not as slippery as I imagined, I’m not having problems with them so far. I bought a yarn that is too thin for the scarf, so I’ll use it for practice and then buy another one.

I thought I’d post pictures along the process, so here we go!

This first picture is of my cast-on and knit stitch practice. I missed a few stitches here and there but overall I’m satisfied with the result! I understood how to make the stitch and at the end I think I had a good rhythm. I also missed the first stitch of the cast-off, but the other ones I got right. This is the first time I’ve ever done this, so I wasn’t expecting it to turn out perfect. I think it’s pretty good for my first try. Now I’ll move on to the purl stitch!

Just finished the Purl Stitch!  I think it looks a lot better then the Knit Stitch I've done earlier.

I forgot to take pictures during the process of making the scarf, so I'll post the pictures of the final product and tell you a bit about my experience.

So, when I first started the project I had only one ball on yarn, which was already a mistake. When the yarn ended I went to the store to buy some more and they didn't have it. So I had to buy a yarn that had a different color and start the project all over again. I recommend getting at least 5 balls of yarn, depending on the size of your scarf. I bought 5 and after adding the fringe I had about half of the fifth ball left.

Another mistake was the needle I used for that first ball of yarn. It was too small, so the scarf was becoming really heavy and stiff, almost like a rug. The saleswoman at the store helped me and I bought needles with the apropriate size that second time.

Starting the scarf with the new yarn I had some trouble with the needles, because they were made of plastic. The yarn kept slipping at the end of the needle and I had to start over a few times (at the beginning I was insecure about knitting on stitches that got out of the needle, but afterwards I did it and it turned out fine!) which made me reaaaally angry. But that's part of the learning process, so I just calmed myself down and started over.

After that rough start things were great! I knitted watching movies and got a good rythm going. It took me about 18 hours (maybe a bit more) to get it all done.

Here is the final product!

The scarf if a Christmas present to my mother, who is going to Canada next week. Since it's very cold over there - especially for a Brazilian! - I wanted the scarf to be as cozy and big as possible, without being unconfortable to wear. I'm really happy about the result and I loved doing it!

I look forward to taking the next knitting classes here on skillshare.

This is me wearing the scarf:

I hope you like it, see you next time! 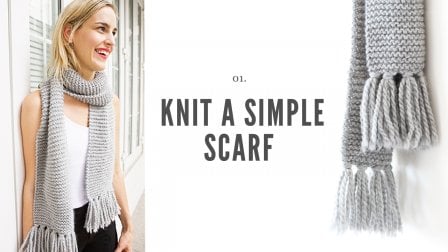 Knitting I: Learn the Basics with a Simple Scarf
Davina Choy