I was commissioned by a friend to create her wedding invites for her upcoming nuptials taking place in Sicily. We decided to create a map as well as the invite and information booklet to add a personal touch to her special day.

Following 2 tutorials (Francesca Guasconi and Tom Froese) we selected important locations to highlight and we saved these on Google drive:

Additionally, I decided to also include the following:

I created separate outlines using an fine tip black ink pen and adding shading details. Then highlighted the areas I wanted to be filled in with colour.

I also adjusted the opacity to 80% for all the images so they blended with the background better.

Vizzini was the first attempt and I tried to create the outlines using a nib pen with ink in a pot, I found it messy and difficult so from then on, I stuck with pen

When I scanned this illustration in, I realised it was too dark, so I lightened the image on Photoshop and used some of the watercolour Photoshop brushes to create a light purple colour. I used the blend tool and additionally made a label to break up the darkness and add a sandy tone that linked this illustration to the colour pallette of the map.

Initially I made these blue, but then changed to red to bring in some of the subtler colours and to contrast well with the cooler green/blue tones of the map.

I used the same illustration of the lemons from the invites I created and traced an outline to fit with the other illustrations. I created lemon trees too and then recoloured the lemons to be pink for cherry blossom to add another feature to the map.

I was happy to take some creative liability in terms of the locations, although they did correspond to the Google map, the client wanted the locations to look closer together. I therefore did some amendments to the following: 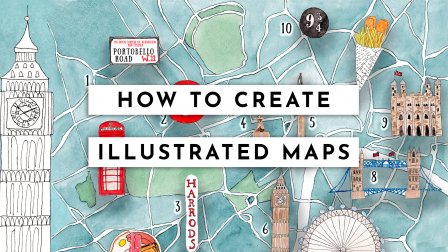