Shading: Beyond the Basics

I'm very glad I stuck with this series through to completion. I will, of course, need to continue practicing the fundamental concepts introduced in the Art and Science of Drawing; but the crucial shift this course has helped me with is providing a process for drawing and a vocabulary for what to consider when doing so. That awareness of what to look, I think, is key: something that will inform and provide a foundation not only for drawing in general, but also for continuing to learn how to draw a range of subjects.

The Cone and the Egg

I don't recall too much of particular note with regard to these. I used a boiled egg and a paper cone. The sharp line in the core shadow of the cone in the first drawing annoys me (I'm not sure whether it was a mistaken pencil slip or a crease in a paper that I put down before thinking better of it); and the egg in the second drawing is a little too sharp-edged. But I did feel like these were a leap forward in what I though I could do, and I get a sense of satisfaction out of looking at them.

I struggled with the ellipses making up the rim of the bowl. The placement of the cup--with the handle suggested by shadow but not facing the viewer--was, I suspect in retrospect, an attempt to manage the complexity of the subject after being a little discouraged after the first drawing.

I didn't have white acrylic on hand, so white highlights were added in Photoshop after the fact. These are more visible in the bowl, less so in the cup. That approach is something I continued to do with the drawings that follow. The highlights are the only digital adjustment in any of the images in this post.

I didn't have any suitable children's toys on hand, and so settled on this pot in part because I had struggled with ellipses in the previous lesson and wanted more practice with them. There are minor highlights added in Photoshop on the edge of the lid and on the rim just under it (softer, and so perhaps less easily discernable). The arc of lighter tone towards the right side of the belly of the pot was left clear during the initial shading process.

I found a red bell-pepper in the fridge that had some interestingly flatter sections, for this project. My shading pencil gave out about two thirds of the way through shading this (fractured core, so sharpening it just resulted in losing more and more of the pencil) and I only had a pencil from a different brand on hand. It was an interesting switch--it could achieve a similar darkest-dark, but graining resulted in a smoother wash with less visible tooth. I was a little worried that using the black pencil to tone the background would result in muddiness, and so decided to gesture to the color of the pepper with a red background, instead. Again, the highlights were added in Photoshop in lieu of a physical paint such as gouache.

The shift in the assignment structure for this project really gave the last lesson in the series a nice sense of resolution--and I very much appreciated the invitation to continue drawing in the spirit of self-expression.

I shifted a few things for this drawing in the spirit of experimentation: I went with toned cream paper (rather than the bright white printer paper I'd been using for this sequence), and decided to try out an oil-based color pencil. The subject is a ceramic "log" that has been sitting near my workspace for the duration of the Art and Science series. I drew it outside, which was a learning experience: it was a windy day, which makes me both excited about and consider the logistics of drawing outdoors.

I notice how (as had been mentioned in an earlier part of the shading series) outdoor, natural light meant that core shadows didn't really appear. The light also shifted rapidly, with the line of termination moving across the object as I was laying in the initial sketch. I tried using crosshatching with more acute angles on the log itself, along with initial hatching marks on the shadow side that followed the contours of the subject. I tried flattening out the raised concrete bed the log is sitting on by using more perpendicular cross-hatching, and added a wash of tonal shading to differentiate it further. I liked the graphic look of the cross-hatching marks, and so stopped short of adding more until they blended together more illusionistically. Lastly, I used a different shade of brown, and a green, to suggest the environment around the subject. 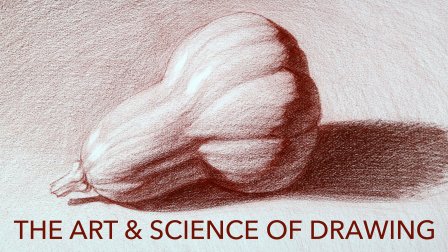